Share All sharing options for: Searching for Jesus Montero 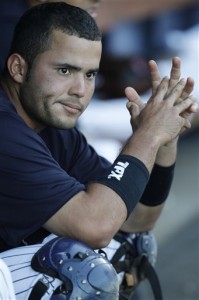 Now is not a great time to thrust Jesus Montero into the fray. (AP)

Amid the Jorge Posada drama, there's been brief and mostly passing discussion of heir apparent Jesus Montero. In an effort to pull together a few thoughts and sources, here's the latest.

While there's little doubt that Montero will eventually hit at a big league level, it does seem as though his spring troubles have carried over. At the point in late March when the Yankees decided Montero would not break camp with the team, the prevailing view was that he was pressing, quite understandable for a 21-year-old rookie trying to make a splash in camp. Baseball Prospectus colleague Kevin Goldstein notes that Montero hit .365 without walking once in 74 plate appearances in April, but just .259 with six walks in 66 PA thus far in May; he has yet to really find a groove.

I missed it at the time, but earlier this week, Goldstein offered a strong counterargument against the logic of promoting Montero now, one that has far more to do with the kind of scrutiny he'd be under than his current performance:

Most Saturdays, I'm watching Sabado Gigante, but this weekend, there was a can't miss telenovela with the Jorge Posada situation. Less than 24 hours later, there was plenty of kissing and making up and standing ovations, but it's easy to forget that on Saturday night there was all sorts of talk about releases and breaches of contracts, and if you talk about no more Posada, that means the arrival of Jesus Montero. This really has nothing to do how Montero is doing... this has to do with the worst idea ever. As the best prospect of the most popular team in baseball, Montero has an awfully large spotlight on him as is, and to draw him into this drama-fest would arguably be one of the more difficult debut assignments since the days of David Clyde. There will be enough pressure as it is on Montero when he finally gets the call, and the Yankees know that reducing the non-baseball pressure on him when he does arrive could be the key to initial success.

For those who don't know who Clyde is, he was an 18-year-old high school pitcher whom the Rangers took as the overall number one pick in the 1973 draft. Desperate to make a buck, team owner Bob Short planned for Clyde to make two starts in the majors before heading to the minors. The youngster packed the park, and he held his own amid a circus-like atmosphere which did him no favors. Short decided to keep him in the majors, but he didn't fare well, battling injuries and never developing into the pitcher he might have been had he not been mishandled.

While not exactly a parallel to Montero, the crazy circumstance into which he'd be thrust does him no favors; as strong as "worst idea ever" is as a statement, this is coming from a prospect expert with contacts among scouts with insights into Montero's makeup. Also worth noting is the fact that Montero still hasn't made much progress in improving his defense, which given this season's early numbers is still a work in progress. Montero has just two passed balls in 26 games, but he's allowed 24 successful steals in 26 starts, nabbing just 17 percent of attempts. "Nothing really new to report there," says Goldstein.

Earlier this week, Steve opined that the callup of Chris Dickerson was mostly about creating some space between the Posada controversy and Montero's eventual arrival. I'm not entirely in agreement on that front — Nick Swisher's illness and season-long struggles create a sliver of opportunity for a position player, particularly if Andruw Jones is going to pick up some at-bats DHing against lefties in Posada's stead. Of course, Dickerson got his bell rung during Wednesday night's epic 15-inning win in Baltimore, and at this writing there's no word as to whether he has a concussion and thus his further availability.

If Dickerson has to go on the new seven-day concussion disabled list, the Yankees will need to make another move, but it's Justin Maxwell or Jorge Vazquez — both of whom are punishing the ball at Scranton — who are the leading candidates for a look if the team decides to swap out hitters, not Montero. His time is coming — possibly even at Posada's expense, if the anonymous sources within the Yankee front office are to be believed — but as we learned in the spring, it hasn't yet arrived.