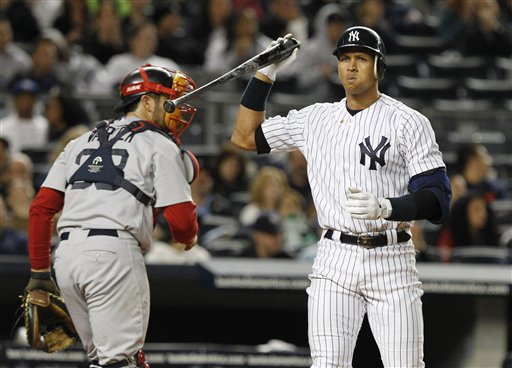 Alex Rodriguez has the second-largest platoon split on the Yankees. (AP)

In previewing the Yankees' series against the Rangers two weeks ago, I mentioned, in passing, that there was a rather extreme difference in the lineup's performance in games started by opposing left-handers versus games started by opposing righties. While that was and remains true, that statement is based on a split on Baseball-Reference.com that includes the team's performance against the starter in question and all of the relief pitchers that follow him. Having taken the time to crunch the numbers myself, I can now tell you that, while the Yankees are hitting just .212/.306/.381 in the 11 games this season in which their opponent has started a left-handed pitcher, are averaging just 4.27 runs in those games, and have gone 5-6 in those contests, those opposing starters themselves are just 3-5 in those games, have just four quality starts in 11 tries, and have allowed a more respectable .249/.343/.429 line. That last is still inferior to the Yankees' .264/.344/.466 performance in games started by opposing righties (per B-Ref), but not so much as to raise a particularly large red flag.

Still, it's enough to get me wondering about the individual splits of the Yankees regulars. The team's overall performances against righties and lefties are almost identical (.248/.333/.444 vs. RHP; .255/.366/.443 vs. LHP), but that even split is the result of a mix of rather lop-sided splits that lean in both directions. Looking at the Yankees' nine regulars, Robinson Cano is the only one without a significant platoon split, and of the remaining eight, only the other three OPS leaders Curtis Granderson, Mark Teixeira, and Russell Martin (Cano currently ranks third, ahead of Martin) are hitting well enough that their weaker platoon split still represents above-average production. That leaves five men who have problematic platoon splits, two of whom vanish against righties, and three of whom vanish against lefties.

Small sample warnings abound, of course, but here are the splits of those three groups using Gross Production Average (GPA), an under-utilized shortcut stat that improves on OPS by weighing on-base percentage more heavily than slugging percentage and places the result on the same scale as batting average. Thus far this season, one dominated by pitching, the American League average GPA is .242.

Cano and Teixeira are performing roughly in line with their career splits. Cano's split is typically a bit larger than it has been thus far this year, but in general is a negligible difference that betrays no meaningful weakness against southpaws beyond a typical platoon disadvantage. The switch-hitting Teixeira has always been a better hitter from the right side, and for three of the last four years (2007, 2009, and 2010) it was his left-handed swing held down his April numbers, so what he's done thus far this year is both ahead of his usual pace, and in sync with his usual pattern.

Normally you'd trust the first 2,880 at-bats over the last 314, but Granderson's increased power and new-found ability to punish left-handed pitching have been consistent over the last three or four months and I'm willing to believe they're real. It could well be that when he begins his inevitable decline, the ability to hit lefties will be the first thing that goes, but for now, that weakness in his swing seems to have been completely eliminated.

As for Martin, his reverse split is out of character. Typically he has a fairly standard platoon split. It seems that he's been a victim of bad luck against lefties thus far, hitting just .222 when putting the ball in play against a southpaw. That bodes well, as it suggests that there is a positive correction coming that could help Martin out of his current slump (.175/.309/.263 over his last 18 games).

It's no secret that Swisher is a mess right now, and it's clear from the above that it's his left-handed swing that's the problem (which is hardly news to anyone who has been following the team closely). As with Martin, a large part of the problem seems to be bad luck. Swisher is hitting just .194 on balls in play when batting left-handed. Then again, his power is down all over. In 42 right-handed plate appearances, his only extra-base hits have been a pair of doubles, and his isolated slugging (slugging percentage minus batting average) from the left side has been a mere .102, less than half his career mark of .212. So, while his walk, strikeout, and line-drive rates are all in line with his career rates, something still isn't right, and with three-quarters of his plate appearances coming from the left side, that's a major problem for the Yankees. The short-term solution could be more playing time in right field for the left-handed Chris Dickerson, a career .274/.362/.419 hitter against right-handed pitching. Long-term, one has to expect Swisher, historically a fairly platoon-proof switch-hitter who hits for more power left-handed, but for a higher-average and with more patience right-handed, to return to form.

That last doesn't apply to Derek Jeter, whose decline has manifested itself in a drop in his already modest power, a product of his extreme ground ball rates, and an inability to hit right-handed pitching. Though Jeter has always had a fairly conventional platoon split, he was a .311/.381/.446 career hitter against righties prior to the 2010 season. Over the last year and change, however, he has hit just just .246/.307/.309 against righties, while continuing to look like Derek Jeter against lefties (.315/.393/.470). That's a drastic split, and one that begs for some sort of platoon help, or at the very least a demotion in the batting order when righties are on the mound (which is most of the time). The problems with the latter are all off-field issues about hurt-feelings and fan outrage. The problems with the former are that the only thing harder than finding a shortstop that can his is finding one that can hit left-handed. Still, given Jeter's performance against righties the last two seasons, even Ramiro Peña, a switch-hitter who is stronger from the left side, having hit .282/.313/.347 against righties in his career, would be an improvement. Add in Peña's defense and . . . yes folks, we're there already.

I tend to wonder how much Gardner's split is the result of a self-fulfilling prophecy. He had solid numbers against left-handers in Triple-A and in his first full major league season (.291/.381/.400 vs. LHP in 2009), yet has Joe Girardi has frequently benched him against southpaws. It could be those early strong splits were small samples that benefited from some lucky breaks (the 2009 line above included a .356 average on balls in play). It could be that he really is a weaker hitter against lefties (his career splits reveal a GPA roughly 18 points lower against southpaws than against normal people), but I wonder if that would be the case if Girardi hadn't artificially limited his exposure to left-handed pitching. No matter, Andruw Jones, come on down.

Posada is another hard-luck case. As Jay mentioned in passing earlier today, Posada has been a victim of terrible luck on balls in play this season. His career-low line drive rate (15 percent compared to a career mark of 22 percent and a 2010 rate of 19 percent) suggests that it's not all bad luck, but hitting .184 on balls in play on the season is clearly fluky. Posada has put 14 balls in play from the right side (against 10 strikeout and six walks), but not one of them has dropped. That will change, not only because those things tend to correct themselves over time, but because Posada has always been a better hitter from that side. Small samples, bad luck, they have all conspired to drive Posada crazy in the early going this year. He's doing better from what historically has been his weaker side. Posada is hitting .227/.313/.466 left-handed this year, which isn't great, but it's not enough to get a hitter with his track record dropped from the lineup, and even there he has a mere .226 BABIP. The big question is if he, like Swisher, can clear his head enough to let his luck even out, or if his rage, confusion, and embarrassment will eat him alive first. There's little doubt that his career .221/.335/.362 line in 426 at-bats as a designated hitter and pinch hitter prior to this season is working against him, mentally.

Finally, we get to Alex Rodriguez. That huge reverse split looks fluky for one of the best right-handed hitters in the game, but Alex has actually had a very slight reverse split on his career (just three points of GPA), and last year he hit just .198/.292/.372 against lefties prior to hitting the disabled list at the end of August with a calf strain (for whatever reason, he found his stroke against lefties after returning in September). This year he's doing much the same, but without any power (he has just one extra-base hit, a double, in 40 plate appearances against lefties this season). I hesitate to suggest those struggles might be real, but they're not unprecedented. He has now hit just .210/.311/.398 against lefties since the start of the 2010 season.