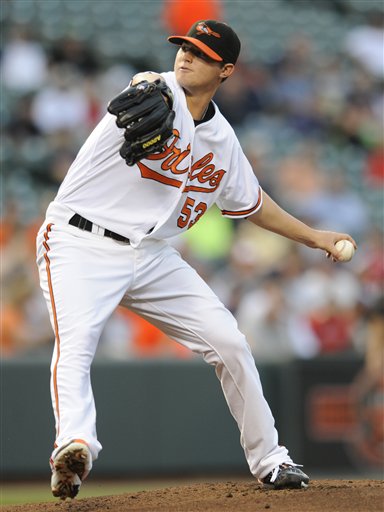 Rookie Zach Britton, who is scheduled to start Wednesday night, has been one of the few bright spots for the Orioles this season. (AP)

Since the Yankees swept a rain-shortened two-game set in Baltimore in late April, the Orioles have gone 11-9, in large part by feasting on the struggling White Sox and Mariners (combined 6-1). They've won five of their last seven coming into this quickie two-game set, but three of those wins were against the Mariners at home. As a team, the Orioles are below league average in both run scoring and run prevention and though they're just two games behind the Yankees in the standings, third-order wins tell us that they've not played nearly that well and that the true performance gap between the two teams is seven games (with the Yankees' actual record two games below their third-order projection and the Orioles' three games above theirs).

Looking at the Orioles' lineup, the only two players who might avoid being considered disappointments thus far are center fielder Adam Jones and catcher Matt Wieters, though both skirt that label in part by having disappointed so much in previous seasons that their slightly-above-average performances thus far stand as improvements. The rotation, led by rookie Zach Britton, who will start in the opener against the Yankees (weather permitting), has been solid (3.97 ERA), but the bullpen has been a mixed bag with more bad than good, blowing six saves (the same number as the Yankees), while posting a 5.09 ERA and letting opponents hit .269/.349/.475. Still, if you're an Orioles fan and you had to pick three players to be the bright spots in another dark season, you'd likely pick Britton, Jones, and Wieters, so not all is going against the Orioles' plan.

Update: The Baltimore Sun's Jeff Zrebiec has some health updates on the Orioles, who could be without Brian Roberts, Derrek Lee, and Cesar Izturis in this series.

Because of a rain-out in Boston last night, the Yankees will get their first look at 23-year-old rookie Zach Britton tonight. The groundballing southpaw already appears to be emerging as the Orioles' ace and has been a fixture in my Awards Watch column at SI.com as a top contender for the AL Rookie of the Year award:

Britton didn't break camp with the Orioles, but when Brian Matusz went down with an intercostal strain, Britton was called up to start the third game of the season. The 23-year-old lefty allowed just one run in his first two major league starts, covering 13 2/3 innings, and three of his [first] four starts [were] quality. A groundballer, Britton throws his low-90s sinker roughly two-thirds of the time, but also misses a lot of bats with a mid-80s changeup, leading some scouts to believe he has the stuff to be a Brandon Webb-style ace.

Britton's luck on balls in play [.219 BABIP] isn't inexplicable. He's an extreme groundball pitcher throwing in front of a solid defensive infield comprised of first baseman Derrek Lee, second baseman Brian Roberts, shortstop J.J. Hardy and third baseman Mark Reynolds. The catch is that Britton's ground ball rate hasn't been that extreme thus far, and his strikeout rate has been poor. Britton has six quality starts in eight tries, missed a seventh by just two outs, and is coming off his strongest start of the season, nine scoreless innings of three-hit, no-walk ball against the Mariners. Still, he struck out just five men in those nine innings, got only two more ground balls than fly balls, and was facing the second-worst offense in the league. He was also matched inning-for-inning by Jason Vargas, passing the game to the bullpens in extra innings. The 23-year-old Britton is supposed to be as good as his record and ERA make him look, but thus far he hasn't really been.

Bartolo Colon turned in a quality start against the Red Sox his last time out, but walked a season-high three men against just four strikeouts in six innings, his worst performance in the strike zone in his first five starts with the Yankees. That's a small complaint, but I can' t help feeling like the bloom is coming off the rose. Maybe it's just that our expectations have be raised. He still has four quality starts, a 3.66 ERA, and a 4.00 K/BB in five turns. His last long-relief appearance came against the Orioles on April 14. He threw three shutout innings, striking out three.

Sabathia didn't have his best start in half of his first eight starts but his ninth, this past Saturday against the Red Sox, was the first in which he allowed more than four earned runs. He last faced the Orioles on April 23 in Baltimore and twirled eight innings allowing three runs and striking out seven against one walk.

Jeremy Guthrie has received just 2.15 runs of support per game thus far this season, which is why he's leading the majors in losses with an ERA below 4.00. The O's have scored a total of eight runs in those six losses, which includes four runs in his last three starts, all losses. Guthrie's performance has fluctuated a bit, but the results have been pretty consistent: no runs, and no wins since he beat the Rays with eight scoreless innings on Opening Day. Though this is already the Yankees' third series against Baltimore this season, Guthrie hasn't faced New York since last September. In three starts against the Yankees last year, he went 0-3 with an 8.64 ERA.