High Fives All Around

Share All sharing options for: High Fives All Around 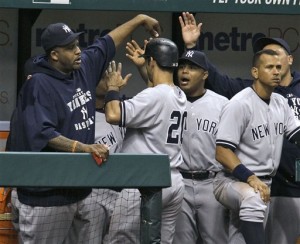 Jorge Posada had reason to celebrate on Tuesday night. (AP)

The Yankees finally got off the schneid on Tuesday night, beating the Rays to snap their six-game losing streak. Alex Rodriguez hit two home runs for the first time in forever (give or take a few months), Jorge Posada collected two base hits while batting a noncontroversial seventh, Brett Gardner executed a bunt that didn't have anyone calling for his own execution, and — to complete the circle of improbability, because it was that kind of night — David Robertson rode a unicorn across the bridge from Ivan Nova to Mariano Rivera. It was just like Joe Girardi drew it up, if Girardi were hallucinating with Hunter S. Thompson during Fear and Loathing in Las Vegas.

Where to begin? Let's start with Rodriguez. After Nova surrendered 1-0 via a solo homer to Eliot Johnson in the top of the fourth, A-Rod answered with a towering 425-foot solo shot to deep left center. With the score still knotted when he came to bat again in the sixth, he drilled a 438-footer to deep center field to put the Yankees up 2-1. The homers doubled his total over the previous month, a span during which he hit an impossibly awful .176/.255/.275 over 102 plate appearances, and they came against a pitcher who, while traditionally homer-prone, hadn't allowed a longball in his first 34.2 innings at home this season. It's not enough to pronounce him cured of whatever had been ailing him — as Jack Curry writes, the problem has been diagnosed but not necessarily fixed ("Hercules! The legs! Lift with the legs!") — but it's at least encouraging.

The Yankees would tack on four more runs in the late innings, the first two of them keyed by Posada, who had an encouraging night as well. With Saturday's controversy having more or less blown over while the Yankees were busy facing lefties Jon Lester and David Price, he was back in the lineup, batting in the slot where he's made 27 out of 33 starts. After grounding out in the second inning, he led off the fifth with a sharp single, but was stranded when James Shields struck out the next three hitters. He laced a one-out double down the right field line in the seventh, and was oddly pulled for pinch-runner Eduardo Nunez when he got to third after Gardner's perfectly bunt single, though that at least enabled him to end his night on a high note. Nunez scored on Chris Dickerson's bloop single, and Derek Jeter's infield single pushed Gardner home.

Looking beyond Saturday's storm, Posada is hitting .275/.383/.350 via a .367 BABIP this month, compared to .125/.232/.375 with an .065 BABIP in March/April. As slappy as that is, it means his luck is evening out, something that the Yankee offense could dearly use. Their losing streak knocked them out of the AL scoring lead, and while they're third in OBP (.334) and first in slugging percentage (.444), they're just eighth in batting average (.250). Their .194 isolated power is tops in the majors by a good 29 points, and their 10.3 percent walk rate leads all teams as well, but their .269 BABIP is second-to-last, 31 points below last year's mark with the same cast of characters. Some of that is an MLB-wide decline (from .297 to .290), and while some of it may be age, there's no reason to think the Yankees will remain this low all season. Perhaps even more germane to their recent slump, they've got just a .250 BABIP with runners in scoring position, 37 points below average, this while posting the majors' seventh-best OPS in such situations (Cliff will be along later to dig into more hitting splits). Among the Yankee regulars, only Gardner has a BABIP above .300 (.326 after collecting his first bunt hit in 10 "successful" bunts and who knows how many wasted strikes trying); everybody else is at least 20 points below their career mark. If you want to bank on one thing happening with the offense between here and October, bank on that changing.

As noted, Robertson came up big. Nova scuffled early, needing 66 pitches to get through the first three innings, but he breezed through the fourth and fifth on a combined 18, and to that point had allowed just one run via three hits and no walks. Alas, he walked Ben Zobrist on five pitches to begin the inning, then surrendered a single to Johnny Damon. Evan Longoria's groundout advanced both runners, and Girardi ordered Nova to walk the red-hot Matt Joyce to get to B.J. Upton. Robertson came in and pulled another Houdini, striking out Upton on six pitches and then freezing Casey Kotchman on three. His performance in the seventh was spottier (two outs and two walks), but Joba Chamberlain retired Kotchman to close out the frame and worked a scoreless eighth as well, something he can hopefully do more of in light of Rafael Soriano's trip to the disabled list. With the Yankees adding two more runs in the top of the ninth via singles by Russell Martin, Gardner, and Derek Jeter, Girardi brought in Amaury Sanit to protect the five-run lead, and while the overaged rookie got the first two outs, he surrendered a run via a walk and a Zobrist double, prompting Girardi to call upon Rivera — who had been warming up since the eighth inning, which wasn't cool — for the last out. It wasn't exactly how you might have envisioned the Yankees breaking a losing streak, but wins come in all shapes and sizes.