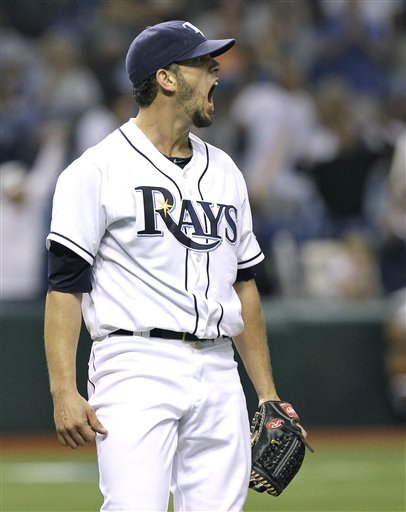 James Shields, who will start Tuesday night, has come roaring back this season after being undone by a high batting average on balls in play in 2010. (AP)

So, remember all that stuff I was saying about 0-5 teams in my Red Sox preview on Friday? It doesn't seem to be bothering the defending division champion Rays, who are making a good show toward becoming just the second of the 113 teams to start 0-5 to make the playoffs (the first being the 1995 Reds). Since starting 0-6, the Rays haven't lost more than two consecutive games and have gone 23-10 overall (.697) to leapfrog the Yankees into first place in the American League East.

Oh, those Rays. They're so unconventional.

I can't say I'm terribly surprised by the Rays success thus far, particularly not given the fact that they're doing it, once again, with pitching and defense. The Rays lead the majors in defensive efficiency (both park-adjusted and otherwise) with average-to-exemplary fielders everywhere but behind the plate, and they have what I frequently remarked during the preseason could well prove to be the league's best starting rotation. Indeed, thus far only the A's and Angels have a better rotation ERA in the AL, and the top four men in the Rays rotation—lefty David Price, righty James Shields, sophomore Wade Davis, and rookie Jeremy Hellickson, have combined to post a 2.87 ERA and 1.14 WHIP while averaging just shy of seven innings per start.

If that's not scary enough for their AL East rivals, Shields, at 29, is the only member of that quartet over 25 years old. More bad new for the Yankees, they'll see the top two pitchers from that quartet, Price and Shields, the latter of whom is having a Cy Young-quality season thus far, in this series. That's a spicy mouthful of reality, facing division rivals Josh Beckett, Jon Lester, Price, and Shields over the course of four days, and could well turn the team's offensive skid into a full-on slump.

Adding potential insult to injury, the Rays closer is Kyle Farnsworth, who not only has a 1.35 ERA and has convered seven of eight save chances thus far, but has walked just one man and not allowed a single home run through his first 13 1/3 innings this season. Farnsworth heads up a bullpen which has been as effective as it is suspect. The Rays' pen, which consists entirely of pitchers who were with another organization last year, has compiled the fourth-best bullpen ERA in the AL (3.24, behind the A's, Jays, and rookie-heavy Royals pen) and has blown just two saves all season, fewer than all but the Phillies' pen in all of baseball, but is dead last in the majors in strikeout rate (5.52) and ranks ahead of only the Rangers's unit (and just barely at that) in K/BB ratio (1.34).

Rookie lefty Jake McGee, who many presumed would emerge as the closer, was farmed back out to Triple-A after posting a 5.14 ERA and striking out just two men in his first 11 appearances. Farnsworth is a ticking time bomb and the other names don't inspire much confidence: 35-year-old Joel Peralta, 32-year-old Juan Cruz, 28-year-old Adam Russell, 27-year-old lefty Cesar Ramos and 26-year-old rookies Rob Delaney, a side-armer, and Brandon Gomes. To give you some sense of their value coming into the season, three of those men (Russell, Ramos, and Gomes) came over from the Padres in the Jason Bartlett trade, Delaney was claimed off waivers from the Twins, and Peralta and Cruz both signed one year deals worth less than a million dollars. Farnsworth is making $2.6 million, his lowest annual salary since 2005, on a one-year deal with a club option for 2012.

If the Rays' bullpen is suspect, their lineup is similarly so. Though they have thus far managed to keep their collective heads above league average in terms of run scoring, the Rays have been heavily dependent on Ben Zobrist rediscovering his 2009 form, Matthew Joyce delivering on his promise at the plate at the age of 26, and Casey Kotchman hitting for the first time since 2007 (albeit still without any power). Yes, the Rays were without Evan Longoria for 27 of their first 29 games, so having him back in the lineup should help counterbalance the correction likely to be experienced elsewhere. Still, there are red flags all over this lineup. Sophomore catcher John Jaso, a supposed on-base machine, has a .286 OBP. Thirty-seven-year-old Johnny Damon has only been a few ticks better, at .289. April sensation Sam "Superman" Fuld, a throw-in in the Matt Garza trade with the Cubs, has been wearing a Kryptonite cup over the last three weeks, hitting .123/.190/.178 in 79 plate appearances since April 24. Bartlett's replacement, Reid Brignac, has been hitting like that all season (.185/.219/.196 in 97 PA), and the perpetually disappointing B.J. Upton is the only regular I haven't yet mentioned.

It's not as though any of the high-profile former Rays (Carl Crawford, Carlos Peña, and Bartlett) are hitting either, so at least the Rays are getting all those outs on the cheap, on both sides of the ball. Still, given the potential for collapse in the bullpen and lineup, and the likelihood of a Rays sweep in this brief, two-game series, one may not want to disregard that history of 0-5 starts just yet.

Since I complained that the Yankees needed more innings out of Burnett, A.J. has averaged seven innings over four starts, posting a 2.57 ERA along the way. The Yankees have gone 1-3 in those games, but that's not really Burnett's fault. The offense scored an average of just 2.75 runs in those four contests, and two starts ago, Burnett was undone by a trio of Yankee errors that led to three unearned runs (though, to be fair, one error was his own, and another proved harmless; the third, a bad throw by Eduardo Nuñez at shorstop, plated two runs).

Price, whom the Yankees last saw in a pair of duels with CC Sabathia with the division on the line last September, both games the Rays won with Price allowing a total of just three runs in 14 innings, is building nicely on his Cy Young runner-up season of a year ago. He's shed a few strikeouts, but his walks are way down, resulting in a 5.22 K/BB and a lower WHIP, that last despite some correction on balls in play. Price is averaging more than seven innings per start on the season, and in his last two starts (against the Blue Jays and the surprising Indians) posted this combined line: 16 2/3 IP, 9 H, 3 R, 2 ER, 0 HR, 0 BB, 17 K. Add in the Yankees struggles against lefties this season and overall offensive slump, and Burnett may have to blank the Rays to get a win in this game.

Speaking of being undermined by his defense, the second inning of Ivan Nova's last start was an embarrassment on all fronts. Robinson Cano failed to get a single out on a double-play ball. Francisco Cervelli moved those runners up via a passed ball, then later fired a pick-off throw into the outfiled with a runner on third. Nova himself flubbed a comebacker that could have been another double play, then went to first with his throw rather than home to cut off another run. When the Yankees finally slouched off into the dugout, the Royals had batted around and scored six runs on just five hits. Nova hadn't been sharp in the first and failed to get an out in the fourth, but his start was worse than it should have been because of the Yankees Bad News Bears impression in the field. Prior to that he had three quality starts, which, ironically, benefited from his defense doing outstanding work on balls in play. I suppose turn around is fair play. However you look at it, Nova is holding his own in the big picture, with four quality starts in seven turns and an ERA lower than his far more highly-regarded fellow rookie Kyle Drabek of the Blue Jays (2-2, 4.81).

Not that any of that matters much with Shields on the mound for the Rays. After eight starts, Shields has gone at least seven innings and allowed no more than two runs seven times, the lone exception coming way back on April 8. Since then, he has averaged more than 7 2/3 innings per start while posting a 1.33 ERA, a 4.40 K/9, and allowing just two home runs in 47 1/3 innings. Shields has not allowed a home run in any of his previous four starts at the Trop this season, and has posted a 1.72 ERA, 9.2 K/9, and 5.33 K/BB at in those four home starts. Add to that the fact that, even in an off-year last year (the product of a fluky .344 BABIP), he was hard on the Yankees, going 2-1 with a 3.36 ERA and 9.6 K/9 in six starts against the Bombers, four of them quality. Shields is in the running for the Cy Young in the early going this season, and the Yankees are staring a two-game sweep in the face with Price and Shields on the schedule.