Cashman on the Loose

Share All sharing options for: Cashman on the Loose 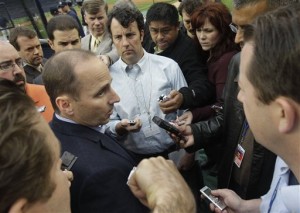 Brian Cashman holds court to discuss the Posada situation. Half-seen in the background is your humble wordsmith. (AP)

As I learned this weekend, one of the advantages of having a BBWAA card is that you can more or less drop everything and head for the ballpark if there's a big story going down. Such was the case on Sunday, when I headed up to the Bronx to see how the Yankees dealt with the aftermath of Saturday's absurd spectacle. As I hadn't actually seen Saturday's game, just watched my Twitter feed explode while at a birthday party, I had to familiarize myself with the details over how Jorge Posada's pulling himself from the lineup escalated into the threat of being released immediately. I was struck by how seemingly benign Brian Cashman's interview with Ken Rosenthal was, how quickly the situation exploded once Cashman briefed the media off camera, and how thick with strong legalese Rosenthal's next report was, throwing around terms like breach of contract, termination and retirement in the middle of a ballgame against a heated rival.

My read of the situation, which is up at Baseball Prospectus (it's a freebie), puts the lion's share of the blame for the spectacle squarely on Cashman, who after all is supposed to be the adult in the room, the voice of reason:

In isolation, Girardi’s decision to bat Posada ninth was hardly indefensible: hitting .165/.272/.249, Posada has simply not produced at anywhere near an acceptable level. His woes are primarily the result of a batting average on balls in play that has cratered; while his isolated power and walk rate are more or less in line within his career marks, his .164 BABIP is about half of his career .316. After showing barely a platoon split as a switch-hitter over the course of his career, he's 0-for-2011 against lefties, reaching base just six times in 30 plate appearances via walks while failing to collect a hit. It's worth wondering if his problems are of a piece with the concussion scare that sidelined Posada last September and led to his mothballing as a catcher. Since last September 8, he's hitting .160/.280/.314 in 182 plate appearances, about a third of a season's worth.

What should raise some eyebrows, however, is the fact that while Girardi was willing to demote Posada, he has resisted the idea of dropping Jeter from the leadoff spot given a line (.260/.313/.320) that, past the superficiality of batting average, isn't a whole lot better, particularly when one considers that the bulk of the Captain's production—his only two home runs and thus two of his five extra-base hits on the year—came on a single day one week ago in hitter-friendly Arlington. Jeter's line entering that game was .256/.315/.282, and given the extra at-bats he was receiving atop the lineup relative to what Posada's been getting while batting mostly seventh, he was arguably hurting the offense more; since then, he’s hitting .185/.206/.185. Even after the winter's contentious contract negotiations, the shortstop is still something of a sacred cow within the organization, one armed with a new multiyear deal and still playing a position where he is subpar, while Posada is in his walk year and more easily pushed around.

In isolation, Posada's decision to pull himself from the lineup, while uncool, was not as beyond the pale as it was made out to be, at least to hear Jeter tell it as he staunchly defended his teammate on Sunday. "One thing I told him is if he said he needed a day to clear his mind, there’s no need to apologize," he said prior to the game. "If I thought he did something wrong, I’d be the first one to tell him."

Posada's self-removal wasn't particularly well-handled or well-timed, surrounded by a swarm of national media in the midst of a losing streak, not to mention amid a series against the Red Sox, who had yet to spend a day at .500 this season until completing the sweep on Sunday. Nonetheless, on and off the field, the man has spent his 17-year career representing the organization well, emerging as a vocal leader and a five-time All-Star who deserves more than passing consideration on a Hall of Fame ballot to be named later. He has never produced the kind of drama that Jeter, or even Mariano Rivera, caused during this past winter's contract talks. After initially resisting the end of his catching career when informed by Cashman last winter, he has played the good soldier, even if he has yet to find a groove as DH. Scrambling for a way to feel as though he can contribute, and perhaps fretting the point in the future where he will be shown the door of the only organization he has ever known, his head was almost certainly not in a good place on Saturday.

Given all that, it not only rates as a questionable move for Cashman to go public as he did, it's hard to see how he could have handled the situation much worse, even if he did have the backing of owners Hank and Hal Steinbrenner. The Yankees emerged from the dysfunction and chaos of the first quarter-century of George Steinbrenner's ownership (at times in absentia, of course) at almost exactly the same time they stopped routinely flaying players in public. Team officials began acting like adults, the constant turnover in the front office and in the manager's chair ceased, and the franchise thrived on the field and at the gate. For Cashman to harken back to a day of kicking a player—not a scrub like Ken Clay or Tucker Ashford, but a pillar of the franchise—when he's down was downright Steinbrennerian, more disrespectful than batting him ninth. There was simply no good reason to air that dirty laundry, no percentage in embarrassing the player and, ultimately, the organization. No reason not to say, "I don't want to comment until I've had a chance to talk to my manager," and let cooler heads prevail.

Cashman's candor makes for great copy, but given the roll he's been on with regards to some of his statements about Derek Jeter, Rafael Soriano, Pedro Feliciano and now this, it feels as though he's distancing himself from his own roster, and perhaps greasing the skids for his exit when his contract is up after the season. One can't exactly blame him; he's in his 14th season in a job which chewed up about 100 men in the previous two decades, and in his 25th year in the only organization he's ever known. He's had a great run of success, but the pressure to maintain the Yankees' standard of excellence has to be exhausting. It would be no crime if he were tired of doing business the way it's done in the Bronx, and yearning to seek out different challenges once his contract expires. But if that's the case, one has to hope he could handle his departure with more grace than he showed on Saturday.