Posada: He Said, He Said

Share All sharing options for: Posada: He Said, He Said

"On that list are twenty-eight men asking to be excused from tomorrow’s mission, three times more than normal. They gave a lot of reasons, colds mostly. Most of them haven’t got colds, and that doesn’t mean they’ve suddenly gone yellow. It just means that they’re getting their bellies full… How much can a man take? What’s physical and what isn’t?"—Paul Stewart, Twelve O’Clock High (1949) 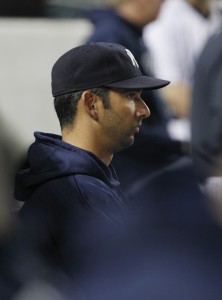 Posada's Profile in Despair: You can slap this mug on a nickel, but maybe not in the lineup. (AP)

Jorge Posada is one of the best-hitting catchers in history, has played on six pennant winners, and won four championship rings. Posada is also a 39-year-old who is losing his powers while struggling to adapt to a new role. Under such conditions, people make mistakes, and it seems that Posada made three—asking out of the lineup at the last minute without explaining himself; retroactively concocting said explanation—a back injury the Yankees had never heard of; and expecting Brian Cashman and Joe Girardi, or anyone else, to look kindly upon his actions. None of this does anything to alter or tarnish his place in Yankees history, and five years from now, when his worthiness for the Hall of Fame is being debated, this event will seem a minor aberration, or will have been completely forgotten.

Posada wasn’t the only one who made a mistake last night. If Girardi felt that Posada was not worth playing against Josh Beckett, and batting your designated hitter ninth makes that statement in bold, bright colors, then he could have benched him and avoided a situation which he had to have known would provoke embarrassing questions. Similarly, Cashman had a choice as to make the matter public or not. He chose to embarrass a veteran who, whatever the poor quality of his judgment, had not necessarily deserved to be publicly embarrassed.

Indeed, during his postgame press conference, Girardi made a point of saying that it is not unheard of for a player to ask for a break for whatever reason, and that he made a point of not investigating too closely in such instances. This should have applied to Posada, but it seems that the last-minute nature of the request, combined with the request coming on the day that the ex-catcher was dropped to the bottom of the order, seems to have led the skipper and his boss to assume the worst. No one covered themselves in glory last night.

All of this drama does nothing to deal with the problem of Posada’s dying bat. Designated hitters are batting .261/.344/.400 overall. The Yankees, at .176/.268/.344, are dead last. In his last 20 games, Posada has hit .162/.278/.235 with one home run. That last longball came just over three weeks ago. Posada is signed through this season. That money is spent and gone—don’t entertain thoughts of the Yankees getting the old backstop’s contract voided because he took a day off. Major-league contracts don’t get voided unless the player in question goes on a killing spree.

If the Yankees feel Posada is done, then they should have the courage of their convictions, bite the bullet, and hit the eject button. That sounds cruel and cold, but the sentimental approach doesn’t do anyone any good, not them, not Posada, and not the team’s effort to win a pennant. If, on the other hand, they maintain the belief that Posada will eventually hit his way out of this slump and contribute to a division title or wild card, they ought to have told him that and explained that the shift in the batting order was meant to buy him time, not show him up.

Meanwhile, Jesus Montero keeps hitting. He went 3-for-5 last night and is now hitting .336/.365/.437. He’s not walking (he’s got give free passes in 29 games), and he’s hit just two home runs, but you can take that .336 at face value when you’re talking about his potential to out-hit Posada. The Yankees may still cling to the dream that Montero will be a major-league catcher, but if the need is now, there is no harm in letting that dream wait a year.

Whatever the solution to the DH problem, and to Posada’s frustrations, half-measures like batting him ninth don’t accomplish anything, don’t spend the money of his contract any more slowly, and have served only to cause problems in the clubhouse. If they believe in him, fine. If they don’t believe in him, let him go where he’s wanted, or if he’s not wanted anywhere, let him hang it up. Whatever the answer, it’s time to make the call.