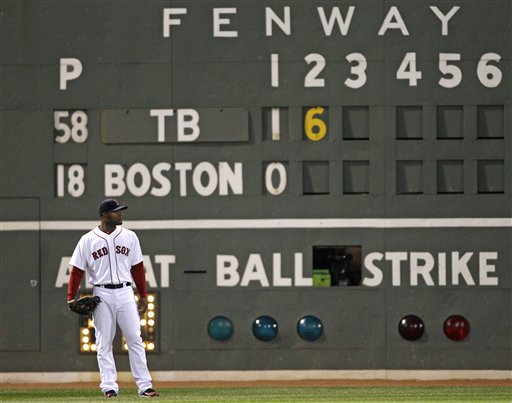 Expected to help lead the Red Sox back to the playoffs, Carl Crawford has instead been the face of their failures thus far this season. (AP)

Back on April 6, I wrote a piece for SI.com that illustrated just how damning an 0-5 start has proven to be over the course of major league history. Logically, burying a team just five games into the season is absurd, but as I discovered then, out of 110 teams to start 0-5 prior to this season, just two went on to make the postseason. Of those two, one, the 1974 Pirates, didn't turn things around until June, won just 88 games, and only made the playoffs by virtue of being in a weak division which had sent the 82-79 Mets to the World Series the previous season.

Though I repeatedly couched those findings with phrases such as "I don't believe it, either," that history made it less surprising when the Red Sox slow start grew to 0-6, then 2-10. Boston finally seemed to turn things around at that point, winning eight of nine, but have gone just 7-9 since that brief hot streak and arrive in the Bronx this weekend, their first visit this season, still comfortably below .500 and tied for last place in the AL East.

Pinpointing what has gone wrong is not difficult. Only the Orioles and Twins have allowed more runs per game among AL teams than the Red Sox thus far, and the Boston offense, typically among the best in baseball and reinforced this year by Adrian Gonzalez, Carl Crawford, and the healthy returns of Dustin Pedroia, Kevin Youkilis, Jacoby Ellsbury, and Mike Cameron, has been below average in run scoring, ranking 16th in the major leagues in runs per game.

On a player-by-player basis, the latter is easier to suss out. Everyone knew the Red Sox's catching situation was suspect, but Jarrod Saltalamacchia and creaky captain Jason Varitek have combined to hit just .183/.248/.246 thus far this season. Far more surprising is the fact that the second biggest offender has been $142 million man Crawford, who has managed a mere .218/.255/.303 line and been caught three times in eight steal attempts (62.5 percent success). Pedroia went 9-for-13 against the Yankees in their last meeting, but has hit just .190/.318/.230 in 151 plate appearances against the rest of the league. J.D. Drew is hitting for neither average nor power, and the team's attempt to prop him up via a platoon with the right-handed Cameron has only made things worse, as Cameron isn't hitting at all and the team's right fielders, as a result, are hitting .227/.329/.386. The Red Sox thought they solved a similar problem at shortstop when Jed Lowrie took the majority of the playing time away from Marco Scutaro in mid April, but after at hot first week as the primary starter, he has hit just .232/.271/.339, and now Scutaro is on the disabled list with an oblique strain. That's five of the nine lineup spots, and I haven't even mentioned the fact that Kevin Youkilis is hitting .241 with less power than he has shown in any of the past three seasons.

Speaking of Youkilis, Ultimate Zone Rating hates his play at the hot corner and has him on pace to cost the Sox 15 runs over 150 games, and Lowrie's rating at shortstop is even worse. UZR also rates Jacoby Ellsbury as below average in center, once again, though not to such an extreme degree. The Red Sox get a lot of that back from Pedroia, Drew, Crawford, and Gonzalez, but the net effect is an average defensive team despite the presence of those four.

That's one reason the Sox have been giving up so many runs. The others include some particularly brutal performances by some of the newer faces on their staff. John Lackey, in his second year in the Boston rotation, has given up six or more runs in four of his seven starts and sports a 8.01 ERA. Bullpen imports Bobby Jenks and Dan Wheeler have combined to allowed runs in half of their appearances and hit the DL together last Thursday, Wheeler for the first time in his career, with a combined 10.42 ERA. The Yankees won't see any of those three this weekend.

There's still reason for optimism in Beantown. I've long had my doubts about Crawford, but he's not nearly as bad as he has looked at the plate thus far. Pedroia should come around. The team is 15-10 since that 2-10 start, their third-order winning percentage on the season is a winning one (.526, albeit still fourth in the division), and the first-place Rays are doing a fine job of proving that long history of 0-5 teams irrelevant.

That said, I don't expect the catching situation to improve. Drew, Scutaro (both 35), and Cameron (38) may well be done. The late-blooming Youkilis could be seeing the first signs of an early decline mixed with the difficulty of maintaining his plate performance while struggling with his new position (even if it's an old position for him). Lowrie, now 27, likely isn't anything. Lackey was a big disappointment last year and just might be turning into a legitimate bust. Jenks, who has walked nine men in 8 2/3 innings, was non-tendered by his former team who may well have known something.

I did a radio spot earlier this year tied to that piece on those 0-5 starts. When asked about the Red Sox, I said that there's always an optimistic way to look at a team and a pessimistic way, and one could find plenty of room for pessimism when looking at the Red Sox, a team that many, myself included, picked to win not just the division, but the American League pennant this year. Some of that pessimism has thus far proved unfounded. Daisuke Matsuzaka has been solid. Jacoby Ellsbury has been productive. David Ortiz continues to defy the decline that seemed to have him in its grips just a few seasons ago. Josh Beckett has been healthy and shown flashes of his 2003 and 2007 form. However, right now the Red Sox have a lot of glasses that are half-full and leaking. It just might be that they've fooled us for a second year in a row, and that 0-5 starts really do mean as much as history says they do.

Pitching matchups and Red Sox roster after the jump . . .

Buchholz was among the league leaders in ERA and wins last year, but he was hit-lucky, with opponents hitting .263 on balls in play. This year, the 26-year-old righty's BABIP is back up around average, his strikeouts are down (from last year's already weak 6.2 K/9), and his walks are up. It's no surprise, then, that just one of Buchholz's seven starts have been quality. That one came two turns ago, against the Angels, and he has had five others that have missed by no more than one run or one inning. That leaves just one real dud, which came against the Yankees in his second start of the season. Buchholz burned through 92 pitches in 3 2/3 innings in that game, walking three while giving up five runs (four earned) on eight hits, four of them going for extra bases. In five starts since then, he has posted a 3.14 ERA, albeit while averaging less than six innings per start and striking out just four more men than he has walked.

Bartolo Colon's last start, his first dud in four tries, looked a lot like his initial relief appearance back on April 3. In both he gave up a handful of runs in roughly four innings despite still-solid peripherals. Fly balls were Colon's downfall in that last start, with two home runs and a triple contributing to all five of the runs he allowed, and he has now allowed four home runs in just 11 1/3 innings over his last two starts (a whopping 3.2 HR/9 in that minuscule sample). Colon still has an outstanding strikeout rate and 5.29 K/BB on the season, but those fly balls could prove to be his undoing.

Speaking of hit-lucky, opponents have hit just .211 when putting the ball in play against Josh Beckett this year, a massive swing from his .341 BABIP of a year ago, though as the Yankees saw on April 10, his success thus far this season has been as much the result of skill as luck. Beckett brings a 13-inning scoreless streak into this game, but hasn't picked up a decision since mid-April, in part due to a rain-shortened outing two turns ago. For those who missed it, or are trying to forget, Beckett dominated the Yankees for eight innings in their last meeting, holding them to two singles, a walk, and a hit batsman while striking out ten in eight scoreless frames.

Jay took an extended look at Sabathia's performance thus far after his last start. Historically a slow starter, Sabathia is off to one of his better starts, statistically speaking, but has only been on his game in four of his eight outings.

Lester's season has, at this point, been bookended by a pair of poor, five-inning outings on the road. In between, he went 4-1 with a 1.54 ERA and 10.1 K/9 in six starts. Lester is 6-1 with a 9.7 K/9 in his 12 career starts against the Bombers, and if you throw out his first start against them way back in 2006, he has a 2.56 career ERA against the Yankees. He also brings a 17-inning scoreless streak against the Yankees into this start.

Garcia has now made five starts for the Yankees. Three were quality (all team wins), the other two only missed by an inning or a run, but came in team losses. The Yankees could stand to score more runs for him. They have scored just six runs total in the last three games he has started and are averaging just 3.4 runs per game for him over those five starts.