A Very Brief and Likely Premature Thought, Upon Which Jesus Montero Intrudes

Share All sharing options for: A Very Brief and Likely Premature Thought, Upon Which Jesus Montero Intrudes 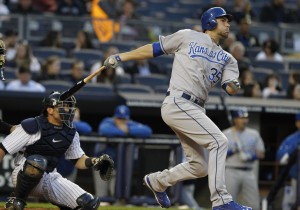 Eric Hosmer: The Latest Nemesis, Potent in the Bronx. (AP)

The reason I bring this up is that it sure seems like Eric Hosmer might be to the 21st-century Yankees what Brett was to the 20th-century team. Like I said, it's early, it's premature... But my, the lad is talented. Someday the Yankees will develop a young player with this kind of hitting talent.

Oh, yeah, they did... Jesus Montero. Too bad the Yankees don't have an opening at DH or a need to goose the offense just now... Montero is hitting .327, and he knocked his second home run of the season. He's not dominating the minors the way Hosmer did, but he doesn't have to be Hosmer to give the Yankees a lift. He just has to be better than what they have now.