A Few Links for a Friday Afternoon

Share All sharing options for: A Few Links for a Friday Afternoon 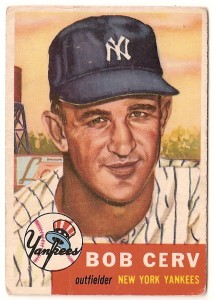 Cerv-ing up some light reading...

One of the simpler changes: manicures.

Martin has no qualms about getting a manicure because he says it helps his pitchers.

In spring training, some Yankees pitchers had a hard time seeing the signs he'd put down during games, and instead of using whiteout or tape, Martin painted his nails.

"It's not a good feeling when you're putting down a sign, and you're not really sure if they're going to throw that pitch," he says as a woman cuts his cuticles in the salon before putting on a fresh coat of neon green on his right hand.

He settled on manicures because he didn't like the feel of tape on his fingers and whiteout was too messy. A few weeks ago he went to a manicurist who painted the nails on his right hand bright orange with a white stripe down the middle. He says his teammates haven't given him a hard time; they know why he does it. But some start to laugh when asked about his freshly painted green-colored right hand.

Actually, Martin does. He also says he prefers pedicures because everyone should take care of their feet. In this setting -- a suburban salon filled with women -- Martin is simply comfortable, not showing any signs of insecurity or trying to overcompensate by acting macho.

Using quotes from Dodger GM Ned Colletti, coach Don Mattingly (now manager), and former teammates as well as his current ones, Nelson breathes life into a familiar story — Martin's fast rise in L.A., his intensity, his battles with injuries and off-field distractions, which fueled his exit from the Dodgers. The most revealing part, perhaps, is that depression may have been a factor in his woes. Martin desperately needed a change of scenery, and in finding one, he's managed to click with another player coming off a rough stretch, namely A.J. Burnett, and to make a positive impression on his teammates. Worth a read.

• SI.com's Dan Epstein provides some medical background on the type of stem cell treatment that Bartolo Colon underwent. pointing out that microfracture surgery, which Indians center fielder Grady Sizemore and several NBA stars have undergone, is a stem cell procedure. He also addresses something Steve tweeted about yesterday, noting that it's embryonic stem cells, not adult stem cells, which carry some danger of becoming tumors. His main point is that all of this appears to be above board:

The bottom line is there's nothing shady about the use of stem cells in Colon's surgery — at least not that has emerged in the reporting thus far. Stem cells have been doing their tissue-differentiating work in microfracture surgeries for years. Of course, it's only recently we reporters have written about "microfracture surgery," and not more alarmingly about "controversial 'microfracture' surgery." But it was fair to be cautious in the early days of microfracture surgery, since few athletes who underwent such procedure seemed to return to peak form. But rehabilitation techniques from microfracture surgery are now much more sophisticated [and include Anti-Gravity Treadmills!], and so the procedure now engenders less controversy. I expect the same will happen with many treatments that involve stem cells.

Given bone marrow stem cell treatment is neither entirely new nor particularly controversial in the medical world, there are two other points worth examining: 1.) Does it work for injuries like Colon's? 2.) Is it performance-enhancing?

"This gets into a difficult issue, because no two rotator cuffs are exactly the same," Karli [Dr. David C. Karli, a rehabilitation specialist at the Steadman Clinic in Vail, Colo.] said in addressing the first point. "Does it cure rotator cuffs? I don't know that we can say that. I don't know that there's enough literature with placebos and full trials to say that, but there does seem to be a positive trend. That is different from proof, though. With what we've seen in our clinic and in my experience in discussing it with others who have done it ... bone marrow concentrates do seem to augment tissue to get healthier."

And the second point is pretty much an unknown at this stage. Stem cell injections are implicitly on the 2011 World Anti-Doping Agency prohibited list [section M3.2] as they are "normal cells" that would fall under the ban on "the use of normal or genetically modified cells" without a therapeutic use exemption. Indeed, there are theoretical doping applications of stem cells, since muscle is one of the tissues that mesenchymal stem cells can help to grow. But stem cell treatments are not banned by baseball, and there is thus far no evidence that stem cells have been successfully used for undue muscle growth.

• Baseball Prospectus has a guest piece by Craig Robinson, who does the wonderful Flip Flop Flyball site devoted to baseball infographics. Rather than do an essay, Craig does one of his signature graphics, this one devoted to the volume of players the Kansas City A's shoveled to the Yankees under the ownership of Arnold Johnson, contrasting it to the early Charles Finley era which followed. Among the key players who rode that shuttle were Clete Boyer, Ryne Duren, Ralph Terry and Roger Maris, but some of the more obscure names on the list are surprising. Tommy Lasorda?