Stop With The Bunts Already, Joe!

Share All sharing options for: Stop With The Bunts Already, Joe! 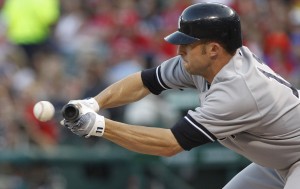 One of my cherished baseball memories is of being at an A’s-Yankees game at the Stadium and having the perfect seats along the first-base line to view Alfredo Griffin being picked off. Getting picked off, along with being caught stealing, is what Griffin did best. In the 1980s, Griffin attempted 262 steals and was caught 107 times, a miserable 59-percent success rate. In 1980, his most Griffin-y season, he was caught stealing 23 times in 41 attempts.

Griffin made a great test for his managers. He played for Frank Robinson, Jeff Torborg, Roy Hartsfield, Bobby Mattick, Bobby Cox, Jackie Moore, Tony LaRussa, Tommy Lasorda, and Cito Gaston. Lasorda is in the Hall of Fame and Cox and LaRussa will surely get plaques one day—these are men who knew their baseball and coached dozens of winning teams. They had a player in Griffin who clearly had speed in his arsenal of tools, yet just as clearly had no clue what to do with it. Despite that, until late in his career his managers just kept letting him run.

Bunting is Joe Girardi’s Alfredo Griffin test. His players can’t do it, and yet he keeps asking them to try. The Yankees have five sacrifice bunts this season, which seems like they’re not trying too often, but that total, which ranks ninth in the league, isn’t reflective of just how many times Girardi has pushed that particular button. Never mind that this strategy is often self-defeating—when you lose an out in an inning, your chances of scoring go down. This season, a team with a runner on first and no outs can expect to score .8 runs, whereas with a runner on second and one out, that number goes down to .65 runs. If the goal is to score just one run, sometimes the exchange is worth it, but mostly it’s not worth the lost potential.

In calling for the bunt, Girardi is often trying to avoid the double play in key situations, but his favorite buntee, Brett Gardner, is one of the least likely players on the planet to get doubled up. Last season, Gardner hit into a double play in roughly seven percent of his opportunities, the ninth-lowest rate in the AL among players with 400 or more plate appearances and second-best on the Yankees to Curtis Granderson, who was doubled up in just three percent of his PAs—Granderson’s combination of speed, strikeouts, and fly-ball swing has meant that he’s only been doubled up 24 times in his career. Gardner’s current rate is 12 percent, which is (a) about average, and (b) will drop over time.

When you add in Gardner’s patience, and not only are you giving up an out when you ask him to bunt, you’re also giving up the possibility of having first and second and no outs, in which case your run expectancy goes up to 1.4—and you can still ask the next batter to bunt if you really feel obligated. Since Gardner isn’t particularly likely to bunt successfully, the whole idea is moot, anyway. You’re just giving up an out to give up an out with no advance, in which case your run expectancy is down to .5.

At the start of the game, each team is given 27 outs on offense to play with. They say baseball has no clock, but that’s wrong—those outs are the clock, and when they’re gone, the game is over. It’s the manager’s job to horde them greedily, like the Grinch that Stole Baseball. Giving one away should be as difficult a decision as deciding to give up your right arm. It should be a gut-wrenching call every time out.

As of right now, Girardi is entirely too profligate a spender of his most precious resources, and what’s more, he’s failing the Griffin test because he’s asking his players to execute strategies they are unsuited for. Girardi is an intelligent man, but in this case he’s a slow learner.