Colon on the Cutting Edge

Share All sharing options for: Colon on the Cutting Edge 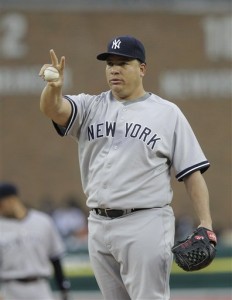 Bartolo Colon's resurgence may owe something to a radical medical procedure. (AP)

I had the good fortune to miss the latter part of Wednesday night's extra-innings loss to the Royals, as I went out to Brooklyn's Bell House to see the great Yo La Tengo, a Hoboken-based band named after the cry — "I've got it!" in Spanish — of 1962 Mets shortstop Elio Chacón and outfielder Richie Ashburn in their futile effort to avoid collisions. In any event, I appear to have jinxed David Robertson, who in the span of five eighth-inning batters walked two (Melky Cabrera and Billy Butler) and yielded a game-tying single to Wilson Betemit, undoing the bend-but-don't-break effort of A.J. Burnett (seven innings, five walks, but just one hit, a solo homer by Eric Hosmer). Judging by my Twitter feed, after that an extra-inning Buntathon of Death ensued, about which I'll let somebody else vent, as my spleen is tapped.

Ballgame aside, the most interesting story in the Yankosphere this morning concerns a player who had nothing to do with last night's debacle. According to the New York Times, Bartolo Colon's rebound owes something to a controversial, cutting edge medical procedure:

Joseph R. Purita, an orthopedic surgeon who runs a regenerative medicine clinic in Boca Raton, said he and a team of Dominican doctors that he led treated Colon in April 2010. Purita said he employed what he regards as one of his more pioneering techniques: he used fat and bone marrow stem cells from Colon, injecting them back into Colon’s elbow and shoulder to help repair ligament damage and a torn rotator cuff.

Purita said he flew to the Dominican Republic and performed the procedures for free, doing it at the behest of a medical technology company based in Massachusetts that he has done business with for several years. Purita, who has used human growth hormone in such treatments, said in an interview that that he had not done so in Colon’s case. The use of human growth hormone is banned by baseball.

"This is not hocus-pocus," Purita said in an interview here. "This is the future of sports medicine, in particular. Here it is that I got a guy back playing baseball and throwing pitches at 95 miles an hour."

Purita absolutely denies giving Colon HGH — "I don't need the stigma and that kind of reputation" — but the report has set off an investigation by Major League Baseball, which of course includes the undetectable hormone on its list of banned performance-enhancing substances. Informed that the Times was working on its story, Colon's agent alerted Brian Cashman, who was previously unaware of Colon's treatment. Cashman passed the information along to MLB, and it sounds as though everybody's cooperating to make sure that this is all above board.

Embryonic stem cells are a hot-button political issue, but stem cells harvested from an adult patient and reinjected don't fit into that rubric at all — and sure, insert your fatty tissue jokes about the amply plump Colon here, while I dust off my biology degree. Stem cells reside in various body tissues; they are undifferentiated, which is to say that they haven't decided what they want to be when they grow up. Their ability to differentiate into specialized cells, and to divide and reproduce through mitosis allows them to act as a repair system within the body, replenishing organs, muscles, and other tissues. From a long-term perspective, adult and embryonic stem cells provide real hope of the ability to treat many major diseases such as cancer, diabetes, Parkinson's disease, Huntington's disease, neurological disorders, and so much more. They are nothing less than the future of medicine.

This isn't the first treatment in which an athlete's own cells are reintroduced into his body, either. A treatment called platelet-rich plasma therapy, in which a patient's own blood is run through a centerfuge — increasing its concentration and thus its ability to deliver growth factors (not HGH)tenfold — and then reinjected into the body to induce the healing of tissue, has emerged in recent years. Dodgers closer Takashi Saito received it when he was diagnosed with a torn ulnar collateral ligament in 2008, and former Yankee Xavier Nady had it for the same problem in 2009; the former avoided Tommy John surgery but the latter didn't.

Golfer Tiger Woods and wide receiver Hines Ward have undergone PRP as well, though the treatment's effectiveness is debated. It hasn't helped that one pioneering doctor linked with PRP, Canadian Anthony Galea — who treated Woods, Jose Reyes, Carlos Beltran and Alex Rodriguez — has also been linked to HGH smuggling and distribution. But as medical treatments appear headed for a collision course with performance-enhancing drug use, it's important to distinguish between the two. Here's what former Baseball Prospectus colleague Will Carroll had to say about Nady's treatment two years ago:

One of the more difficult things to understand is why this therapy—taking out blood, breaking down its components, and putting it back in—is different than blood doping, the process that cyclists, distance runners, and other stamina athletes once used to give themselves an advantage. That technique, long outlawed by WADA [the World Anti-Doping Agency] and others, involved taking out blood, waiting for the body to recover, and then putting it back in. In the last decade, the same process has been replaced by using recombinant forms of hormones, such as rEPO. More recently, the drug NeoRecormon from Roche, has been at the center of a doping scandal. With PRP, the substance is being injected directly into the ligament and contains few or no red blood cells; aside from promoting healing, there are no performance enhancing properties. WADA's guidelines are focused on red blood cells and drugs that cause changes, so this is legal under their standards, which are close but not identical to MLB's. It could not be detected by anything other than a blood count, and even then, two sources said that there would be almost no change in those counts. MLB does not currently conduct blood testing at any level.

Colon's treatment appears to be even less established than PRP. From the Times piece:

Fu added: "You need more of a scientific study. Just the use of this generally should not be done because it is not shown to be effective. In this case, we don’t know how the body’s natural healing abilities, along with the player’s own training, influenced the outcome. We know how stem cells work in cancer and AIDS patients. But in sports, we just don’t know. There is a lot of hype."

Colon's doctor and agent are quick to point out that the pitcher's work ethic has plenty to do with his return as well. In the wake of his 2005 rotator cuff tear, he had understandably lost his focus both mentally and physically while wandering in the post-injury wilderness, but whether buoyed by the treatment or merely a placebo effect (which has been discussed in the context of PRP), he has worked himself back into pitching shape. The results — a spot in a contender's rotation, a fastball that can reach the mid-90s, a 3.86 ERA, 8.9 K/9, and 5.3 K/BB, the latter two marks respectively fourth and second in the league — are encouraging, to say the least.

Given that none of the athletes involved with the rather shady Galea were disciplined, it's extremely unlikely that Colon will be unless MLB finds something egregious. If Purita is to be taken at his word, this is all kosher. So long as it is, the millions of dollars at stake point to a future where willing athletes will be lining up to undergo cutting edge treatments which aren't widely understood. Today's radical treatment may be tomorrow's Tommy John surgery, something which becomes a routine part of the sporting landscape, and perhaps in a few years, we'll be talking about candidates for Bartolo Colon surgery. Welcome to a very weird future.