Share All sharing options for: Houdini in Pinstripes (Updated) 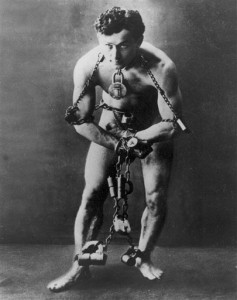 David Robertson has become quite the escape artist. (AP)

Tuesday night's 3-1 win over the Royals — which featured a Melky Cabrera home run in his first game back at Yankee Stadium, natch — contained good news and bad news with regards to the Yankee bullpen, which provided three scoreless innings in relief of Freddy Garcia's six-plus innings of one-run ball. First, the good news.

Garcia entered the seventh inning with a two-run lead, having allowed just five hits and one walk over the course of his 77 pitches, an impressive showing given that the Royals — yes, the Royals — came in averaging an even 5.0 runs per game, tied for second in the AL behind the Yankees. He yielded a leadoff single to Jeff Francoeur, who's hitting a sizzling .308/.349/.579 while everyone wonders whether he's turned over a new leaf (good luck with that), and then walked Eric Hosmer, the much-touted rookie whose recall last week was heralded as the dawn of a new era in KC baseball.

In came David Robertson, who has come to specialize in extrication. He got Mike Aviles to fly out, then walked the execrable Matt Treanor (.227/.315/.312) after Frenchy stole third, thus loading the bases with one out. Fortunately, this brought up the number nine hitter in the lineup, hacktastic glove-first shortstop Alcides Escobar (.247/.292/.326 lifetime). Though Robertson fell behind 2-0 via two high-and-inside cutters, he generated four consecutive foul balls, and then fooled the kid with a low curveball for strike three. Robertson got ahead of Chris Getz 1-2 before the Royals' leadoff hitter similarly fouled off four straight pitches, and again, Robertson used the hook to get strike three, this time via a checked swing. All in a day's work for the for the man whom teammates call Houdini.

When Joba Chamberlain, who's been labeled as the Seventh Inning Guy, came on for the eighth, folks rightly wondered as to the wherebouts of Eighth Inning Guy Rafael Soriano; after all, that's why you label, Mabel — to reduce the act of thinking about what comes next as though such pitching changes were preordained from a higher power. "Joba is coming on for the eighth. Wonder what’s up with Rafael Soriano," wrote Brian Heyman at the LoHud Yankees blog. Joba set down the Royals 1-2-3, and Mariano Rivera followed in the ninth, neatly erasing Francoeur (who had greeted him with another single) via a game-ending 1-4-3 double play.

Afterwards, the word on the street was that Soriano showed up with a sore elbow, which has bothered him for at least a week. Heyman reported Joe Girardi saying that the medical people "don't think there's much there," but that he would nonetheless undergo a precautionary MRI on Wednesday. That's not encouraging news given that Soriano has gone under the knife twice in his career, first for Tommy John surgery in 2004, and then for ulnar nerve transposition and bone spur removal in 2008. If the elbow has actually been a factor for longer than the stated one week — hardly an uncommon situation, as Dodger closer Jonathan Broxton's lack of honesty with his own team shows — it would at least explain Soriano's baffling lack of ineffectiveness. Fortunately, Robertson and Chamberlain have picked up the slack:

Robertson's Fair Run Average — runs per nine, after accounting for inherited and bequeathed runners — is a microscopic 0.43, tops among major league relievers with at least a dozen innings, and his 0.8 WARP leads the pack as well; his strikeout rate is tops among AL relievers, too, enabling him to wriggle out of jams both of his own making and those left behind by others. The IR and IS numbers refer to the number of runners he's inherited and those he's allowed to score, and they include the April 5 outing where he yielded a bases loaded double which charged three runs to Soriano's room. It's all another series of plates from the Small Sample Tapas Bar, but even accounting for that hiccup, Robertson has been the majors' most valuable reliever in 2011, nothing less than Houdini in pinstripes.

As for Soriano, I suspect we'll learn more in the pregame press conference; if I had to place my bet, I'd say "inflammation, 15-day disabled list." Which will be just one more reason to appreciate how important the less heralded and less well-compensated Robertson has become to the Yankee bullpen.

Update: Via YES' Jack Curry, Soriano's MRI results Soriano'showed inflammation, but nothing more serious. He'll be sidelined a couple of days but won't need a trip to the DL yet.