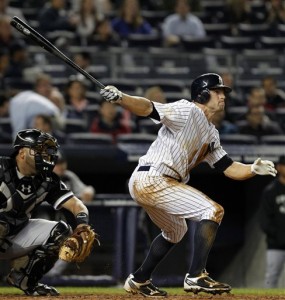 Brett Gardner is back in the swing of things. (AP)

Last week, I pointed out that Alex Rodriguez hadn't been very productive since bopping a grand slam in the Yankees' 15-3 win over the Orioles on April 23. You may recall that the Bronx Bombers' last two runs of the night came via the bat of Brett Gardner, whose two-run homer made for "beautiful" (Joe Girardi's word) retaliation for Orioles pitcher Josh Rupe's egregious drilling of Russell Martin.

That game appears to have been a turning point for Gardner, who came into the night hitting just .128/.196/.191 in 53 plate appearances, a performance for which most NL pitchers wouldn't sign. Including that 2-for-5 performance, which also featured a double, he's hitting .349/.472/.605 in his 54 plate appearances since, tops in all three categories among Yankees, and with the majors' second-best OBP in that span aside from the impossibly hot Lance Berkman. (Yes, these are all small samples; by the end of this article we'll have enough to open a tapas restaurant).

Furthermore, Gardner has reached base in 10 out of his last 11 starts. As hitting coach Kevin Long said last week, "He's turned it around. He's had several good games as of late, and he seems like the Brett Gardner we saw last year. Getting on base, causing havoc, playing great defense." More specifically, Long noted that Gardner had shifted in the batter's box: "Basically he moved up closer to the plate. In a nutshell they were pitching him away, and he was coming out of his swing and not able to stay tight and compact on the outside pitch. So he's moved up on the plate, and that's helped him a great deal."

Tellingly, Gardner's strikeout-to-walk ratio in those two small samples has improved, from 14/4 in the first to 10/10 in the second, and so has his rate of pitches per plate appearance, from 4.13 during his cold spell to 4.46 in his hot one. Overall, he ranks eighth in the league in P/PA at 4.30, down from last year's league-leading 4.61, though that figure had more than a little something to do with his midseason wrist injury. Interestingly enough, the remade Curtis Granderson currently ranks a surprising second in the AL at 4.48 P/PA.

Getting more granular — and cobbling data together from multiple PITCH f/x-related sources via Fangraphs, Texas Leaguers and Joe Lefkowitz, all of which present their figures differently and sometimes disagree on the totals — what's particularly striking between the two splits is that Gardner has dramatically cut down on his swings and misses. He's again among the leaders in lowest swing percentage; his 34.4 percent is the fourth-lowest in the AL, after ranking as the lowest in the majors last year at 31.0. But after whiffing on 13.1 percent of the pitches he faced through his first 54 PA, he's cut that to a mere 3.2 percent since; the strikes he's racking up are either looking or foul. He's getting the ball in the air more often, with a groundball percentage that's dipped from 58.1 to 42.9; not surprisingly, all three of his homers have come in the latter split. The move closer to the plate likely has something to do with all of this.

Gardner's renaissance was preceded by his being dropped from the leadoff spot to eighth or ninth in the order; he has just one game atop the lineup since April 14. Given that his hot streak has overlapped with the higher-visibility Derek Jeter's, it's unclear if or when Joe Girardi might move him back up, particularly since the Captain has had far more success batting first this year (.310/.365/.414, 96 PA) than second (.194/.250/.194, 40 PA). With Granderson set to crush-kill-destroy in the number two spot — where he's hitting .315/.403/.722 in 63 PA — the top of the lineup has become particularly potent at a time when A-Rod and Robinson Cano have cooled off. So long as the Yanks continues to score runs and the team keeps winning, it's unlikely Girardi will upset the order, but as the surprisingly not-so-old saying goes*, "If it ain't broke, don't fix it."

* I was going to write "...as a wise man said..." until learning that this phrase was coined by Bert Lance, who served as the director of the Office of Management and Budget under President Jimmy Carter but resigned amid a corruption scandal in 1977, and was subsequently implicated in another banking scandal in the mid-Eighties. He himself may not have been broke, but it appears he should have filed for moral bankruptcy. At least we learned something, right?