Somebody Give the Big Man a Hand

Share All sharing options for: Somebody Give the Big Man a Hand 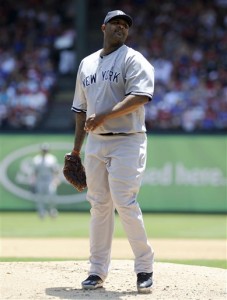 CC Sabathia had a tough day at the office on Sunday. (AP)

The Yankees slugged their way through a strange and sloppy game in Arlington on Sunday, overcoming four errors and a 4-0 deficit with five home runs, including two by Derek Jeter (whom Steve discussed earlier), and one apiece by Curtis Granderson (his league-leading 11th, and his fifth in 35 PA against a lefty), Mark Teixeira (his ninth), and Francisco Cervelli (his first since June 24, 2009, and a grand slam to boot). Lost amid the barrage was a subpar outing by CC Sabathia, who yielded five runs (three earned) and walked four in six innings while striking out just two. Two of the errors were his own, though neither of those led to runs.

Sabathia wasn't sharp early, needing 31 pitches to get through the first inning, which featured a throwing error by Alex Rodriguez and a misplay by Brett Gardner, exacerbated by back-to-back walks to Michael Young and Adrian Beltre; when the dust settled the Yanks were in a 3-0 hole. He used up another 19 pitches in the second inning, which featured a leadoff walk to Craig Gentry, who came around to score. Fortunately, he hung tough, and sandwiched innings of six and seven pitches around two others in which he threw a meaty total of 41.

The big man has a 2.89 ERA through his first eight starts, which is actually his lowest mark at this point since 2006; his ERAs through eight starts since have been 4.02, 6.55, 3.70 and 3.71, so relatively speaking, he's ahead of the game. That's slightly misleading in that he has allowed six unearned runs as well; while such runs don't count against a pitcher's ERA, preventing them is a skill, just as preventing earned runs is (that link is to a nifty — and free — 2004 Baseball Prospectus article by Michael Wolverton on the topic). The six unearnies are just two shy of Sabathia's total for last year's whole season; in fact, he's averaged just eight unearned runs a year throughout his entire career.

Nonetheless, it's difficult to conclude there's too much wrong with Sabathia right now, at least with regards to what he can control. His walk rate is slightly elevated relative to his last few years, but that's a difference of two walks over 53 innings. Meanwhile, his home run rate is way down:

Sabathia's BABIP is 21 points higher than his career mark, and one point off his career high, set in 2007 — the year he won the AL Cy Young award while pitching for the Indians, incidentally. It's also 22 points higher than the Yankees' team average of .291, though it's hardly the highest in the rotation:

So some of the blame has to go to the Yankee defense, whose .695 Defensive Efficiency Ratio is eight points south of the league average, and whose 13 Reached On Errors is tied for eighth.

The biggest thing to complain about regarding the big man is that he's struggled in the first inning, yielding seven runs in eight frames thus far. Even that is really just a short-term issue, as five of those runs have come in his last two opening innings; he yielded two runs to the Tigers last Tuesday via a pair of doubles followed by a pair of productive outs. Only in the seventh inning, where he's allowed six runs while getting just 13 outs (4.1 innings) has he been similarly sloppy; in all other innings, he's allowed three or fewer runs. Since each inning one through seven is really just a tiny sample size of between 22 and 37 PA, there really isn't a whole lot of data to generalize from, except to say that this is not a problem that's persisted throughout Sabathia's career; his first inning RA/9 of 3.49 is lower than innings three through six, all of which are above 4.00 per nine, and his RA/9 for the first three innings (3.77) is lower than that in the next three (4.04).

The bottom line is that while Sabathia's recent early innings have been frustrating given the holes they've created, they're not part of any real pattern. He could use some better defensive support, but as it is, he's gone at least six innings in all but one start, where he fell one out short. Nothing to see here, folks. Move along...

Meanwhile, after slipping behind the Indians last week, the Yankees are back on top of the AL Hit List despite going 3-4 thanks to their positive run differential:

Feast or Famine: Hitting just .256/.315/.282 with three doubles and no homers through his first 29 games, Derek Jeter goes 4-for-6 with a pair of homers on Sunday against the Rangers. The homers snap a 62-game drought, the second-longest of Jeter's career, and they come as part of a five-homer onslaught; the Yankees are scoring 55.2 percent of their runs via the longball, a recordrate. Jeter isn't the only one of the old guard who has been scuffling as of late; Alex Rodriguez is hitting .177/.267/.258 since April 15 in the wake of an oblique strain, while Jorge Posada is at .152/.257/.354 overall via a .138 BABIP, though Joe Girardi intends to stick with him as the regular DH.

Loved the quote from hitting coach Kevin Long after the game, when asked if Yankees are too reliant on home runs: "Come on, this needs to stop," though to be fair, Long did elaborate:

The Yankees are leading the AL in scoring at 5.31 runs per game, a full 0.31 ahead of the next-highest team. The rest of the league should have such problems.