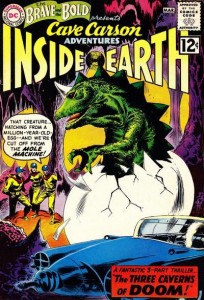 "Great Scott! That dinosaur is hatching out of a... Derek Jeter ground ball! Or is it an UNDERground ball?" (comics.org)

On Jeter and Liriano: Last night, Francisco Lirano threw about the ugliest no-hitter you’ll ever see, one a lot like the almost-no-hitter Yankee Bill Bevens nearly threw at the Dodgers in Game 4 of the 1947 World Series. Bevens walked 10 and ended up losing the game 3-2 on the only hit he allowed. If the White Sox weren’t in some kind of weird offensive death-spiral right now, Liriano might have shared Bevens’ fate. He entered with a miserable 9.13 ERA, the highest ever for a no-hit pitcher, and walked six while striking out two. That is not pitching excellence, but a sustained demonstration of luck. Liriano was a problem before the no-hitter and he’s a still a problem after.

The same thing is true of Derek Jeter, even though he didn’t do anything as unusual as pitching a no-hitter. He merely hit two line drives last night, one for a hit the other for an out. Suddenly, again, Jeter has rediscovered himself. "He said he’s started using his lower half a little more, which accounts for a line-drive single in the first and a sharp line-drive out in the seventh," Chad Jennings reported . Even before that, Joe Girardi had told Wallace Matthews, "[G]round balls are going to get through infields, and guys are going to get hits."

Not so fast, Joe. Sure, Jeter is hitting .292 on grounders, but that’s probably not sustainable. His own career average on grounders is only .261, which is actually quite good. This year, American League batters as a whole are averaging only .221 on grounders. Last year, they hit only a little better, .233. It’s nearly impossible to compile a good average that way. There are a lot of fielders out there, and it’s difficult to hit the holes with any consistency. And, as we have often discussed, you just can’t hit a home run on a ground ball unless an unprecedented number of people simply fall down and don’t get up. Home runs sometimes come on line drives that carry out of the park, but more often are fly balls.

We like to pretend that Jeter was never a home run hitter, but this is a guy with 234 career round-trippers, hitting anywhere from 10 to 24 a season. Now we’re cheering two occasions when he lifts the ball off the ground. This is depressing. There was an early edition of the Rolling Stone Record Guide that contained a one-sentence review of a recording of a late-in-life (1972) concert appearance by Groucho Marx. The sentence was, "A genius maligned, this." That’s how I feel each time Jeter is praised for hitting a line drive or two, that we are applauding someone for what they did yesterday in the slim hopes that they might do it again tomorrow. Groucho was 82; it wasn’t a comeback, it was a farewell. (Alas—I’d have him back in a minute. Someone should get to work on that.)

Inexcusable that Jorge Posada would attempt a stolen base, even if he thinks every other player on the field is comatose.

Nice little streak for Brett Gardner now, with hits in seven straight games if you don’t count his April 27 appearance as a defensive replacement. He’s 8-for-14 with nine walks. Before this streak, he had drawn all of four walks—it’s as if a light switched on and he remembered what he was good at. Now if he could only recall how to steal a base.

Why did CC Sabathia need to go 119 pitches in a game in which he was clearly laboring? It’s almost as if Girardi was infected by Leyland-envy after the useless stretching of Justin Verlander the night before.

Tampa’s Sam Fuld is down to .274/.339/.415. We’ll always have Paris. With Longoria back, the Rays are finally whole again. With their bullpen, which seemed like a major hole coming into the season, performing surprisingly well, the Yankees should have some stuff competition from their neighbors to the south. Note also that B.J. Upton is finally coming around. In his last 10 games, he’s gone 12-for-39 (.308) with two home runs and four stolen bases.

When do the Red Sox take Chris Snyder from the Pirates? Who trades for Garrett Jones? And why did the Pirates go for Brandon Wood if they weren’t going to give him a shot at regular playing time?