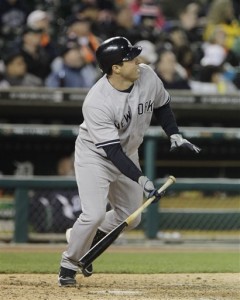 Though Mark Teixeira's last two homers have been solo shots, he's tied for the major league lead in homers with runners on base, with 5. (AP)

The Yankees dig the longball. They lead the major leagues with 46 homers, 10 more than any other team despite being tied for the fewest games played at 27. Of the 31 players with at least six home runs in the young season, five — Robinson Cano, Curtis Granderson, Russell Martin, Jorge Posada, Mark Teixeira — are Yankees; no other team has more than three. Cano, Granderson and Teixeira are three of the eight players with at least eight homers; no other team has more than one. They are dominating the category.

Not surprisingly, the Yankees lead the majors in scoring at 5.41 runs per game, and they owe a greater percentage of their runs to home runs than any other team as well. In his AL East rundown today at Baseball Prospectus, Bible friend and River Avenue Bluesman Ben Kabak discusses some of the handwringing around this particular fact:

Can a team hit too many home runs? It might be the most efficient way of scoring runs, but it’s over and done with very quickly. Those who fear the home run worry that it kills rallies; just recently in fact, the Daily News' Anthony McCarron worried that the AL East-leading New York Yankees were too reliant on home runs.

At the time, Yankee manager Joe Girardi dismissed the suggestion. "A lot of our runs have scored on home runs," the skipper said. "There's nothing wrong with that. Scoring runs in bunches is not a bad thing—it can be tough on clubs to recover and we feel we have a pretty good bullpen."

Kabak presents a table showing the percentage of runs each team in the division is getting via home runs, what former BP colleague Joe Sheehan termed "The Guillen Number," so named because recent White Sox teams have actually been much more reliant on homers than their skipper's smallball tendencies would have you believe. Here's the table for the entire American League:

That 55.5 percent would be a major league record, outdoing last year's Blue Jays, who at 53.1 percent demolished the previous major league high, set by the 2005 Rangers (47.8 percent). As I noted when I dug that up at BP, the Guillen Number isn't something which itself tells you whether a team is good or bad; since 1954, the correlation between winning percentage and the percentage of runs via homers is just .16. It's more descriptive than anything else.

In the case of last year's Blue Jays, whose 257 home runs ranked third all-time, it was a problem, because the team ranked 10th in the league in walks, 11th in batting average, and 12th in on-base percentage; thus, they produced a fairly one-dimensional offense even as they ranked sixth in scoring. As Kabak notes, the Yankees are doing just fine at putting runners on base with their .340 OBP, which ranks second in the AL and third in the majors: "[N]o one in the Bronx should be complaining about how those runs have been plated."

Now that's a list, with six pennant winners and three World Champions. Right now there's no reason to think the 2011 Yankees can't join that elite company doing things just as they are when it comes to the home run.