A Fistful of Notes

Share All sharing options for: A Fistful of Notes 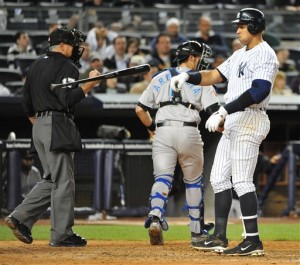 Whether it's a nagging injury or a garden-variety slump, Alex Rodriguez hasn't been handling the bat so well lately. (AP)

On April 15, Alex Rodriguez was hitting .412/.512/.882, an impossible clip to maintain for a full season, but the type of hot start which typically augured well for one of his big seasons. It appeared as though his recovery from two years of hip woes had allowed him to resume his status as one of the world's greatest hitters.

Just days later, Rodriguez was sidelined for a couple of games due to a sore oblique (originally reported as lower back stiffness), and while he did return to enjoy one more big game at the expense of the Orioles, he's just 7-for-44 with three doubles and a homer since I remarked upon that hot start, and 4-for-32 with a lone double since his last breakout in Baltimore. Joe Girardi sat Rodriguez on Saturday, so he ended April hitting .290/.407/.609, his sixth-best April showing in terms of OPS, but his fourth-best relative to the league (183 sOPS+) — better than all but his 2007, 2000, and 2003 seasons, with the two more recent two resulting in MVP awards.

At the time, Girardi noted that Rodriguez had played seven days in a row. Said the manager, "You kind of look and 'Is he getting away from using his legs a little bit?' Maybe. Offensively, maybe he needs a day."

Still, one has to wonder if Rodriguez is fully healthy. During his 7-for-44 skid, his BABIP has been just .182, and he has just one line drive out of 33 balls in play, compared to a .370 BABIP prior, with six line drives out of 27 balls in play. Sure, we're talking about subjective judgments of balls in a small sample size, but they do suggest this isn't simply a case of a hitter going through a rough patch due to a bunch of "at 'em balls." At the very least, this bears further scrutiny, particularly with the Yankees in the midst of a string of 16 straight days with games. A bit of extra spot duty for Eric Chavez probably wouldn't kill anyone.

Meanwhile, Phil Hughes visited a specialist in St. Louis yesterday and received good news: he does not have thoracic outlet syndrome. Furthermore, all tests on his circulatory and vascular system came back as negative as far as any problems. At the very least, that increases the likelihood Hughes can return to the Yankees sometime this season, because it means he won't undergo the arduous 12-hour surgery to remove a rib, followed by what could have been a year-long rehab, with no assurance that he could regain his previous form.

TOS would have been a convenient explanation for Hughes' sudden lack of arm strength. With that crossed off the list, the Yankees are back at square one as far as figuring out what ails him, and have offered no new plans beyond returning him to a strengthening program of indeterminate length.

Fortunately, fill-in Bartolo Colon continues to roll, tossing seven innings of three-run ball against the Tigers on Monday night. He surrendered a pair of solo homers to Alex Avila, but otherwise pounded the strike zone, whiffing seven without walking a hitter, five of them looking. He thus not only maintained his stellar 9.0 K/9 (fourth in the league), but lowered his walk rate to 1.6 per nine (fifth), and upped his K/BB ratio to 5.5 (33 strikeouts, six walks), best in the AL. Stick that in your pipe and smoke it, Dan Haren.

As noted before, thanks to the late movement he gets oColon is getting a ton of strikeouts looking, more than anyone else in the majors, in fact, and one of just two ERA qualifiers getting at least half of his strikeouts in that manner:

Put it this way: Colon is getting more looking strikeouts per nine (5.2) than Zimmermann — and several other pitchers, including Carl Pavano, Tim Hudson, Mark Buehrle, Clay Buchholz and 17 other qualifiers are getting total. Strong stuff.