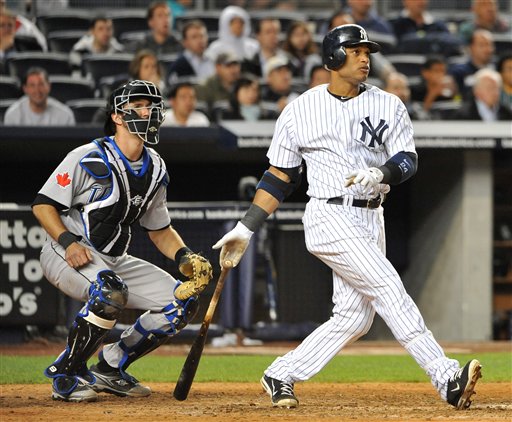 After finishing third in last year's AL MVP voting, Robinson Cano is right back in the thick of the race again this year, and has brought his teammates with him. (AP)

Per the latest addition of my Awards Watch column over at SI.com, Jose Bautista is running away with the American League Most Valuable Player race in the early going, but what little competition he has is coming largely from the Bronx as five Yankees rank in the top eight players on my AL MVP list. Dig:

I picked Howie Kendrick as my April All-Star second baseman in the AL on Friday, but in a three-game home series against Bautista's Blue Jays over the weekend, Cano went 4-for-9 with a pair of homers, a pair of walks, a hit-by-pitch, and a stolen base, reaching base seven times in 12 plate appearances and goosing the weak .309 on-base percentage that prompted me to look past him before the weekend. Cano, who finished third in the AL MVP voting last year, is my top pick from among a pack of Yankees who currently boast five of the top eight OPS marks in the league. Cano trails third-place Curtis Granderson by a difference lost to rounding, with both officially listed at .970, and is followed by Alex Rodriguez (.964), Russell Martin (.963), and, after an enemy interloper, Mark Teixeira (.957). I favor the 28-year-old Cano here because his near-MVP season last year and relative youth (only Martin is younger out of that quintet) suggest he's most likely to maintain his current level of performance, and his low walk rate (he has just three on the season) and batting average on balls in play (.312 compared to a career mark of .322) suggest he could actually improve as the season progresses.

Martin is my second pick from among that cluster of Yankees, because of his position (the average AL catcher is hitting .228/.290/.382 thus far this season), his strong on-base percentage relative to the third up-the-middle defender in the quintet, Curtis Granderson, his youth (he turned 28 in February), and the manner in which the question marks in the Yankees' rotation are increasingly being answered in the team's favor (save for the likely ailing Phil Hughes, of course). I don't actually credit Martin for that last, but I expect the voters will if the Yankees upset the Red Sox and win the division. I also have serious doubts about Martin's ability to sustain his April performance, but the similarity of his performance to his 2007 season (.293/.374/.469) gives it some precedence, and the return of Francisco Cervelli from the disabled list on Sunday should lead to the workhorse Martin getting the rest he'll need, unlike in '07 and '08, when he appeared in more than 300 games for the Dodgers.

Teixeira, who finished second in the voting in 2009, is a notorious slow starter who has hit .237/.348/.427 with a home run every 24.3 at-bats in March and April over his career. This March and April, he hit .256/.392/.549 with a home run every 13.7 at-bats, the best first-month performance of his career. That suggests that, at age 31, he could be on his way to the best season in what is shaping up to be a Hall of Fame-quality career. He has also won the Gold Glove in four of the last six years, the two exceptions being seasons that he split between leagues.

Curtis Granderson, CF, Yankees (N/A). Much as they do seem likely to cancel each other out, all five of those Yankees deserve mention. Granderson isn't just off to a hot start, batting .281/.330/.640 with 8 home runs, he has been raking ever since Yankees hitting coach Kevin Long altered his mechanics in August of last season, making particularly large gains in his performance against left-handed pitching and in his power stroke. Add in his excellent defense in center, a promotion to the two-spot in the batting order, and the ability to steal a base (though he hasn't done much of that thus far), and Granderson's case has to be taken seriously.

Alex Rodriguez, 3B, Yankees (3). Rodriguez, who won his third and most-recent AL MVP in 2007, had a monster spring training and earned considerable MVP buzz pre-season despite entering his age-35 season. He then got off to a red-hot start, hitting .405/.511/.865 through his first 11 games before back stiffness stole his mojo. He missed two games due to his back and has hit just .139/.256/.278 in 43 plate appearances since. Stay tuned.

Not included in that number is Jorge Posada, who despite being one for his last 20, brings the total number of Yankees in the top nine in the league in at-bats per home run to six.

The Yankees lead the majors in home runs by 25 percent over the second-place Indians (yes, the Indians) and, despite a league-average team batting average and sub-par-for-them (but still sixth-best in the majors) on-base percentage, lead the majors in runs scored per game with 5.56 (with the surprising Indians again in second place). The key difference between the Indians and Yankees is that every single member of Cleveland's starting lineup has an OPS+ over 100, while in New York, the five men above are carrying dismal starts by Posada (despite the home runs), Nick Swisher, Derek Jeter, and until very recently, Brett Gardner. That actually bodes better for the Bombers than the Tribe, as the Yankees have room for improvement to offset the coming slumps (such as the one Rodriguez has found himself in since tweaking his back), whereas the Indians are more likely to regress with some of their over-achieving bats. That said, I like the chances of most if not all of that quintet of Bomber bashers to stretch their hot starts into strong seasons, the biggest concerns being not necessarily regression, but injury and the effects of fatigue on Rodriguez and Martin, especially.