The Evolution of Curtis Granderson

Share All sharing options for: The Evolution of Curtis Granderson 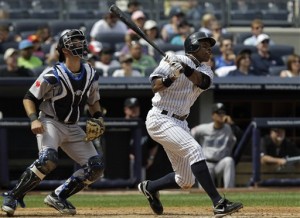 Curtis Granderson has swatted more homers since last August 14 than any player except Jose Bautist and Troy Tulowitzki. (AP)

I spent a lovely Sunday afternoon at Yankee Stadium covering the Bronx Bombers' 5-2 win over the Blue Jays. Today at Baseball Prospectus (in front of the pay wall, even), I've got a long look at Toronto slugger Jose Bautista's evolution as well as some notes about the game. The victory was keyed by Curtis Granderson's three-run homer off Blue Jays starter Jesse Litsch in the fifth inning, breaking a 2-2 tie. Afterwards, both manager Joe Girardi and hitting coach Kevin Long spoke glowingly of the center fielder's own evolution:

"You look all the way back to August, Curtis has been a different player," said Girardi. "That's one of the reasons we turned him loose 3-0. We love the way he's swinging the bat, his ability to hit the ball out of the park."

The homer was Granderson's eighth of the year. He's now hitting .281/.330/.640, and has 22 homers since last August 14, the point where the swing he reworked with hitting coach Kevin Long began to pay big dividends. In that time, only Bautista (27) and Troy Tulowitzki (23) have more homers.

"I'm not so sure I've necessarily seen a 29-year-old guy adjust the way he has," said Girardi, who briefly forgot about Bautista but came up with another example. "Andres Galarraga comes to mind. He went from really struggling to winning a batting title hitting .370. I think he opened up his stance when he got to Colorado with Don Baylor and completely turned it around...

Long praised his prized pupil Granderson: "When I go back to August, I did a bit of talking to the media, saying we made some big changes, we basically revamped a lot of things. Curtis didn't feel that way at all. He's a very bright young man, he was able to take the information that was given to him and simplify it into layman's terms. Simpler and more compact, a more explosive swing. I thought it was four or five big things, and he said it really wasn't that big of a deal."

Granderson is hitting .263/.349/.617 in 191 PA against righties since August 14, and .266/.333/.544in 88 PA against lefties. He had nice things to say about his instructor as well: "He's doing everything he can, whether it be video, whether it be mental, whether it be physical in the cage, just to make you comfortable every day when you step into the batter's box."

Long also spoke about Brett Gardner, who was caught stealing again, dropping him to 4-for-8 on the year, but is coming around on at least some fronts:

Gardner did reach base in all three of his plate appearances, via two walks and a single, and is now hitting an even .200/.300/.400. Since April 25, he's 6-for-11 with six walks, getting on base in four of the five games in which he has had a plate appearance. "He's turned it around," says Long. "He's had several good games as of late, and he seems like the Brett Gardner we saw last year. Getting on base, causing havoc, playing great defense."Asked what specifically Gardner was doing differently, Long replied, "Basically he moved up closer to the plate. In a nutshell they were pitching him away, and he was coming out of his swing and not able to stay tight and compact on the outside pitch. So he's moved up on the plate, and that's helped him a great deal."

For the eighth time in their last 10 games, the Yankees got a quality start from their starting pitcher, in this case Ivan Nova. The 24-year-old righty pitched out of trouble early thanks to his ability to establish his curveball, and worked into the seventh inning for the second straight start. He used the hook to finish off no less than five hitters, two looking, three swinging, his entire complement of strikeouts for the day. Said Girardi of Nova, "I think that [the curveball] has really been the key, his ability to throw it for strikes, to get first-pitch strikes, to be able throw it behind in the count to get back into the count, and to get strikeouts with it."

Starting with Bartolo Colon's effort against the same Blue Jays, the rotation has now completed two full turns while compiling a 2.27 ERA and a 2.65 K/BB ratio. Their collective 3.88 ERA overall is actually ahead of the league average among starters (4.00). The Yankees with an above-average rotation? Go figure.

Said rotation will have to make do without Kevin Millwood, who opted out of his minor league contract on Sunday. He put up a 4.50 ERA in three starts for Trenton and Scranton, but the refrain before he got rocked in his most recent one was that while his results were impressive (14 innings, two runs), scouts were decidedly unimpressed with his stuff. Move along, nothing to see here, folks...