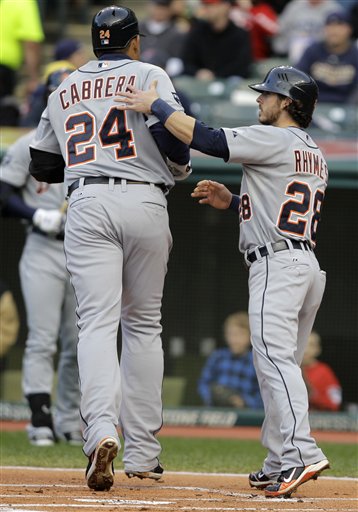 Miguel Cabrera has been a giant among men in the Tigers' lineup thus far this year. (AP)

If it wasn't the rebuilding Cleveland Indians who were atop the division, the Tigers 7.5-game deficit in the AL Central would already be an item of considerable concern, but of the three underperforming would-be contenders in the upside-down division, the Tigers have been the, er, "best," sitting 2.5 games ahead of the last-place Twins and White Sox.

To be clear, the Tigers aren't doing anything well right now. They're in the bottom half of the league in run scoring, run prevention, and defensive efficiency. Miguel Cabrera is raking, but Victor Martinez is out with a groin injury, Magglio Ordoñez has been a complete zero (.159/.227/.174), and the contributions they have gotten from sophomores Brennan Boesch and Alex Avila have to be viewed with a bit of suspicion given how much each struggled at the plate last year.

After dropping two of three to the Yankees in the Bronx to start the season, the Tigers stumbled to a 3-7 start before rallying with a nice 9-3 run that included a three-game sweep of the foundering White Sox, series wins against the Rangers and Mariners, and a four-game split in Oakland. Since then, however, they have lost six straight, being swept at home by the M's, a punchless team that somehow out-scored Detroit 24-6 over three games, and in Cleveland by the division-leading Indians, albeit in three closer contests.

The Tigers now return home, where they are 6-6 on the season, for a four-game set against the Yankees, who have made very little use of their gray uniforms thus far this season playing just seven of 25 games on the road, going 4-3 in those games including their only series loss, to the Red Sox at Fenway.

As the Yankees and Tigers kick of this series tonight, Victor Martinez will begin a rehab assignment with nearby Triple-A Toledo with an eye toward returning for Wednesday's game. The Yankees, meanwhile, hope to have Robinson Cano in the lineup tonight after x-rays on his hand were negative.

Using the gentler three-earned-run requirement, Verlander is six-for-six in quality starts this season. Verlander hasn't been dominant, he has allowed exactly three earned runs in five of those six starts and twice allowed four thanks to one unearned tally, but he has fulfilled his duties as staff ace, averaging seven innings per start and more than a strikeout per inning. That the Tigers are just 2-4 in his starts is entirely on the offense; they have averaged eight runs scored in the two wins and 1.5 runs scored in the four losses. Half of the runs the Tigers have scored in those four losses came against the Yankees on Opening Day, Verlander's lone no-decision thus far. Verlander allowed three runs on four walks and three hits in that game while striking out eight in six innings. All three runs scored on a third-inning home run by Mark Teixeira.

Colon has been flat-out fantastic in his two starts following three strong long relief appearances. Against the White Sox on Wednesday, Colon allowed just one run in eight innings while using just 99 pitches and getting more balls in play on the ground than in the air. On the season, he has struck out 26 men in 26 frames against just six walks. Most impressively, Colon's stuff has looked at least that good, with his fastball reaching 96 miles per hour in his last start and still hitting 95 in the eighth inning, and all of his pitches showing good movement. There's only one question remaining about Colon: how long can he keep this up?

Sabathia opened his season with a pair of quality starts, then had a couple of shakier outings that he managed to fight through, averaging a quality start (12 IP, 5 R) without having one in either outing. In his last two starts, he has posted a 1.80 ERA in 15 innings while striking out 13 against two walks an one home run. He did allow three unearned runs to the White Sox his last start, but those came with two outs in the seventh.

Penny hasn't been as bad as his ERA would suggest. The Yankees put an eight spot on him in his first start, and that put him in a big hole. In his other five starts, his ERA has been 4.65. Two of those starts were quality, one saw him throw seven one-hit, shutout innings against the struggling White Sox, and none of them have been disasters.  Still, the Yankees have a huge advantage in this matchup.

Penny not as bad as ERA -- Yankees put him in a big hole early, inconsistent, but has had some strong starts

After two very impressive starts, each of which saw him twirl six shutout innings on two hits and 90 or fewer pitches, Garcia had a more characteristic outing against the Blue Jays on Friday, burning through 101 pitches in five innings, getting a ton of fly balls, and giving up three runs on a pair of home runs. Less characteristicly, he walked five and struck out six. Garcia has now struck out 13 men in his last 11 innings. That from a pitcher who has never struck out eight men per nine innings over a full season, has a career K/9 of 6.5, and struck out just 5.1 per nine in 2010.

The Yankees bludgeoned Scherzer in his season debut, connecting for four home runs (by Mark Teixeira, Robinson Cano, and Jorge Posada twice) in five innings and scoring six runs to saddle him with a four-digit ERA. Scherzer then peeled off four straight quality starts, going 4-0 with a 1.73 ERA and just one home run allowed in 26 innings. Then, in his most recent outing, he gave up five runs to the Indians, who connected for two homers against him. Taking a step back, Scherzer has a pretty extreme home/road split thus far this season after making three starts in each location. Dig:

That stands in stark contrast to last season, when Scherzer allowed 14 of his 23 home runs at home, though he did have a higher ERA and WHIP on the road.

In his first two starts of 2011, Porcello allowed ten runs in ten innings and walked four against six strikeouts. In his last three starts, he has allowed four runs in 19 2/3 innings (1.83 ERA) and walked three against 17 strikeouts. Those strikeouts are the most important of those statistics, as Porcello's weak K rate in his first two big league seasons has been a major concern. The Morristown, New Jersey native gets a fair share of groundballs with his 89 mile-per-hour sinker, but not enough for that to be his only method of inducing outs. In those last three starts, he's been missing bats with his slider and his 80 mile-per-hour changeup, the latter of which he's going to more often. At 22, Porcello is still maturing into the pitcher he's ultimately going to be, and the Tigers have to be encouraged by what they've seen in his last several turns.

As for Burnett, he's ticking along as a somewhat forgettable mediocrity, which is a huge improvement over last season, or would be if he hadn't opened last season by going 4-0 with a 1.99 ERA in his first six starts.