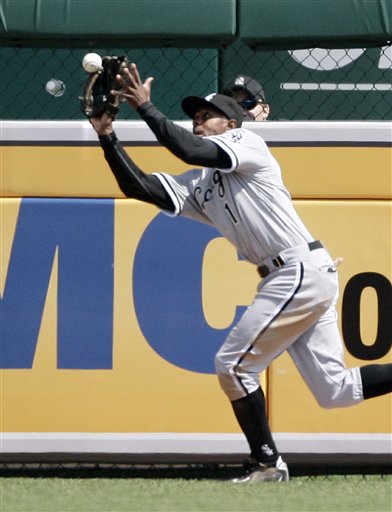 The struggles of their bullpen and lineup are more obvious, but their fielding has been the most damaging to the White Sox in the early going. (AP)

The White Sox were my pick to win the American League Central coming into the season, but things have gone from bad to worse for them thus far this season. During the season's opening weeks, the big story on the South Side was the poor performance of the bullpen, which blew saves in three out of four games during the season's first week and has blown six of seven save opportunities on the season.

Having non-tendered Bobby Jenks over the winter, the White Sox opened the season with ace lefty set-up man Matt Thornton as their closer, but four blown saves in as many opportunities cost him the job, and rookie lefty Chris Sale, the 13th overall pick in last year's draft and the team's second choice for the role, struggled enough to take himself out of the running as well. Sophomore conversion project Sergio Santos now seems like Ozzie Guillen's choice to close, but he hasn't had a save opportunity yet because the White Sox have lost 10 of their last 11 games.

The Pale Hose arrive in the Bronx having not only been swept by the Tigers over the weekend but shutout on both Saturday and Sunday. The Sox have averaged just 1.6 runs per game in those last ten losses and haven't scored at all since the seventh inning on Friday night, when Carlos Quentin and Paul Konerko hit back-to-back home runs off Justin Verlander. Quentin and Konerko are both raking in the early going, but they are the only Southside regulars with an OPS above .690. Things are so bad that Juan Pierre, of all people, leads the rest of the team with a .327 on-base percentage, and Alexei Ramirez leads the lower seven with a .390 slugging percentage.

Worse yet, while Quentin and Konerko are effectively doing all the work themselves at the plate, they are undermining the their pitching staff in the field as two of the main reasons that the White Sox own the worst defensive efficiency in the AL. That poor fielding, to which rookie third baseman Brent Morel and former first-round pick Gordon Beckham have also contributed, has translated to the highest opponents' batting average on balls in play in the league (.326) and the highest rate of runs allowed in the league (5.3 per game). That combination of poor bullpen performance, poor run support, and awful fielding has left the team's best pitcher, 26-year-old lefty John Danks, whom the Yankees won't see in this series, winless on the season.

Right now, there's almost nothing positive to say about the White Sox other than the fact that, just a month ago, they looked like a division winner to a number of people who have some claim on being able to recognize such a thing. As has been the trend thus far this season, the Yankees are catching this team at exactly the right time. When they rematch for four games in Chicago in August, I could be telling a very different story, but given how poorly the White Sox are playing, the Yankees have to enter this season expecting to take three out of four.

Though he has yet to allow more than four runs in a game or fail to complete the fifth inning this year, A.J. Burnett has authored just one quality start in four tries this year. He's getting his strikeouts, and the Yankees are 3-1 in his starts, due in part to the offense scoring and average of 6.5 runs in those four games, but the Yankees need Burnett to get deeper into games (he's averaging 5 2/3 innings per start). A.J. faced the White Sox once last year and was ripped for nine runs (eight earned) in just 3 1/3 innings.

Philip Humber is a former Mets prospect who was part of the booby prize the Twins received for Johan Santana. The third overall pick in the 2004 draft, Humber is now 28 and with his fifth organization after being claimed off waivers from the A's in January. He has made just five major league starts prior to this series, three of them coming for the White Sox this April and, despite throwing a major league pitch in parts of six seasons, would pass his single-season high in innings with 3 2/3 frames tonight. Humber throws a low-90s fastball with a changeup and curve, has good control, and is a viable replacement starter while Jake Peavy is rehabbing his shoulder, but with Peavy's timetable for return still hazy, the White Sox hope Humber can be more than that. Humber has never faced the Yankees before.

Thanks to rain, off-days and his own struggles turning lineups over, which returned after his season-opening quality start against the Twins, Nova will be making his first start in 11 days on Tuesday. His only appearance in the interim saw him enter a tied game in Toronto in the tenth inning, face four batters, and take the loss. As I wrote in my preview for the Orioles series, the Yankee coaching staff believes Nova's trouble turning over lineups is largely mental. If that's true, that disaster of a relief outing couldn't have helped his confidence. Given how often he's being bumped and skipped, one imagine's Nova's grip on a starting job is becoming increasingly tenuous. With Freddy Garcia and Bartolo Colon pitching well, Nova will have to prove he deserves to keep his job before Phil Hughes returns from his minor league rehab assignment, which will could start this Thursday.

Since putting years of frustration behind him by winning 17 wins in 2008, Floyd, who was taken by the Phillies with the fourth overall pick in the draft way back in 2001, has settled in as a nice, slightly above-average innings eater who works primarily with a mix of a low-90s fastball, a swing-and-a-miss cutter in the mid-80s, and an unexceptional curve. In four starts this season, the 28-year-old righty is 2-0 with a 1.29 ERA and 9.6 K/9 against the Rays, and 0-1 with a 6.92 ERA and a 5.5 K/9 against the Royals and Angels. He faced the Yankees once last year, at the end of August, and turned in a quality start only to lose a 2-1 game to . . . Ivan Nova!

Colon has been a revelation thus far, carrying his strong spring in to the regular season, and with a strong and efficient 6 2/3 innings in Toronto, the starting rotation. To the skeleton stats above you can add a 10.0 K/9, 4.00 K/BB, and a league average opponents' average on balls in play, which means he's not necessarily due for a correction in luck. At the moment, the Yankees seem likely to just ride Colon as far as he'll take them, which given his conditioning issues, injury history, inactive 2010 season, and impending 38th birthday, may not be long, but given how little was expected from him when he was signed, he may already have paid off.

Veteran lefty Mark Buehrle is only 32, but over the past decade he has thrown 2,220 innings in 331 starts. His durability, quick pace on the mound, and ability to shut down the running game are all exceptional, but his already meager strikeout rate dropped each of the last two seasons and sits at a career low five starts into the current season. That means more and more balls hit into the White Sox awful defense and bad results for a pitcher who was once this staff's ace. For a lefty fly-ball pitcher who pitches to contact in the major league ballpark most favorable to right-handed home runs, Buehrle does a good job of keeping the ball in the park, and he limits the damage with good control of his large assortment of mid-80s junk, but he seems like a shadow of the pitcher who authored two of the best pitching performances of the last five years. The Yankees smacked Buehrle around last May in the Bronx in his only start against them on the season.

Sabathia didn't seem to have his best stuff in his third and fourth starts of this season, but roared back with a dominant outing against the O's on Saturday in which his fastball was reaching the upper 90s. His only mistake in that outing was a three-run homer by Adam Jones in the seventh. Prior to that he had struck out seven against just one walk in 6 1/3 shutout innings, and he ended his day having needed just 103 pitches to work eight full frames.

Edwin Jackson had a strong stretch run last year after coming to Chicago from the Diamondbacks for Daniel Hudson plus one at the trading deadline, and he has thus far largely held on to the gains in his strikeout rate, striking out 8.6 men per nine innings through five starts, a rate that would be his career best over a full season. He still walks a few too many men, but his biggest issue right now is that he's been the primary victim of the Chisox poor defense; his opponents have hit a whopping .381 on balls in play thus far this season. Jackson still has the pair of low-to-mid 90s fastballs and wipeout slider, and he dominated the Rays in his second start of the season (8 IP, 4 H, 1 R, 1 BB, 13 K), but he hasn't had a quality start since, not even in a rematch with the Rays, and was bat up by the Tigers in his last start. Jackson has a long history against the Yankees (11 starts, four relief appearances dating back to 2006). He hasn't faced them since he was Tigers teammates with Curtis Granderson in 2009, but turned in two strong outings against the Bombers that year.

*note: the different winning percentage for third-order record is not a typo, rather it works out to 8.2 wins and 12.8 losses, I just rounded those totals for simplicity's sake.