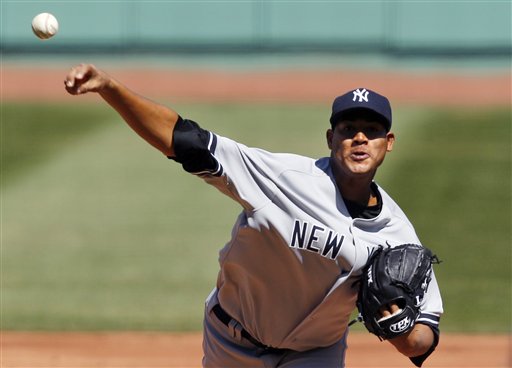 Ivan Nova's pitching line on Sunday will be the most important result the Yankees get this weekend. (AP)

The Orioles got off to a nice little 6-1 start by sweeping the Rays, who stumbled out of the gate, taking two of three from the Tigers, and handing the Rangers their only loss in their first nine games. That hot start was subsequently overwhelmed by an eight-game losing streak that included a pair of losses to the Yankees in the Bronx last week. Baltimore snapped that streak with a couple of wins against the Twins earlier this week, but a 3-1 loss to Minnesota on Thursday left them with a split of that four-game set and without a series win since their home-opening series against Detroit.

During that eight-game losing streak, the Orioles scored more than three runs just twice, but did so in both games against New York, only to lose 7-4 and 6-5. They also allowed fewer than five runs just twice, losing 3-0 to Texas and 4-2 to the Indians. On the season, the O's have scored just 3.94 runs per game, and since allowing just one run in each of their first four contests, they have averaged 5.21 runs allowed per game.

All of that is subject to small sample warnings; the team still has an overall record of 42-33 (.560) under Buck Showalter dating back to last August. Of course, if you zoom out even further, the team has played .411 ball dating back to Opening Day of 2010, and that's not a far cry from their current .444 mark on the 2011 season. As is often the case, the Orioles aren't as good at they looked down the stretch last year, nor as bad as they have looked over their past 11 games, but those last 11 were, by far, their worst stretch in 75 games under Showalter, which suggests that the honeymoon just might be over.

More good news for the Yankees going into this series: two of the Orioles last three wins came in games started by rookie Zach Britton, who pitched beat the Twins on Wednesday and thus will not appear in this weekend's three-game set against the Yankees. In fact, the Yankees once again avoid the Orioles' best three starters, Britton, Jeremy Guthrie (pitched Thursday), and Brian Matusz (still on the disabled list).

Here are the pitching matchups. Orioles roster (with just one change since last week) below the jump . . .

The Yankees will see the same three Orioles pitchers, in a different order, that they were scheduled to see last week in the Bronx before the Game 1 rainout, which bumped Bergesen to the bullpen for the series (he threw two perfect innings of relief the day after the rain). In part because of that rainout, Bergesen has made just two starts this season to Sabathia's four.

A 25-year-old righty, Bergesen is the least of the young pitchers in the Orioles' rotation. A sinker/slider pitcher who just scrapes 90 miles per hour with his four-seamer, throws his changeup at the same speed as his slider, and will very rarely mix in a splitter, Bergesen depends on throwing strikes and getting ground balls. When his opponents get the ball in the air, as they did in his first start of the year, bad things happen. When they don't, as in his relief appearance in the Bronx last week, he has a chance. Strikeouts are not really part of the equation, though, typically, neither are walks.

Sabathia has pitched in some hard luck that far this season, at least as far as picking up his first win is concerned. He turned in a quality start on Opening Day, but coughed up an early 3-1 lead along the way and left the game before the Yankees broke the tie and won the game. In his next start, he twirled seven shutout innings, but the bullpen blew his 4-0 lead in the eighth. On April 10, he battled through 5 2/3, allowing just one run to the Red Sox in Fenway only to watch Josh Beckett and Jonathan Papelbon shutout the Yankee offense for what remains the only time this season, and in his last start, against the Rangers, he fell a run shy of a quality start and again left before the Yankees rallied to win.

Sabathia wasn't at his best in those last two outings, which is typical for him at this point in the season, but as befits an ace, he battled through both outings to keep his team in the game, and the net result of his four starts, with the exception of his win total, amounts to a strong start by his own standards.

The Freddy Garcia who held the powerful Rangers to a walk and two singles over six scoreless innings while inducing more groundballs than fly balls was unfamiliar to me. In 2010, Garcia allowed more than a hit per inning (with a slightly-better-than-average opponents' average on balls in play), had one of the most extreme fly-ball rates of his career, and saw his opponents slug a collective .475. However, the 86-mile-per-hour average speed on his fastball did ring a bell. Garcia was a couple ticks above that last year, but managed to slow down his changeup accordingly against Texas, which was likely one of the keys to his effectiveness in that game as the change is his best pitch. Garcia has not faced the Orioles since 2006.

The Yankees beat Tillman about the head and neck last week, bouncing him after just an inning and two thirds with six runs charged to his ledger. He came back strong against the Twins in his next start, however, needing just 96 pitches to get through 6 2/3 innings, exiting with no walks against five strikeouts and his second quality start in four tries on the season. The O's have high hopes for the 23-year-old righty, but consistency continues to evade him. Tillman also seems to have some velocity issues. He threw 92 when first called up in 2009, but has been sitting in the high 80s thus far this season. He features a curve and changeup and will mix in the occasional slider and cutter, the last of which has actually been a tick faster than his four-seamer thus far this season, though he's only thrown a handful of them in four starts.

With Phil Hughes on the DL, Garcia and Bartolo Colon coming off strong starts, and A.J. Burnett at least keeping his head above water, Nova is the biggest question mark in the Yankee rotation right now. He impressed in a quality start against the Twins to start the season, but his difficulty turning linups over, which his coaches seem to think is a mental issue rather than a shortcoming in endurance or stuff, returned against the far more powerful Boston and Texas orders in his next two turns. He lasted just 4 1/3 innings in each of those starts, the last of which will have been nine days ago come Sunday thanks to two off-days this past week, which allowed the Yankees to skip him. He did pitch this past week, however, entering a tie game in Toronto in the tenth inning. He faced four batters in that game and came away with the loss, which can't have helped his confidence.

Arrieta turned in a quality start against the Yankees last Thursday, his third in as many tries against the Bombers in his young career, which began with a quality start win against New York in Baltimore last June. He then followed that up with six shutout innings against the Twins, his third quality start in four tries this season. Arrieta's peripherals continue to underwhelm, but the 25-year-old righty has a nice 93 mile-per-hour heater and there's potential in his slider, which has been missing more bats this season, and his 6-foot-4 frame. He also features a low-90s sinker and will mix in a curve and changeup. Arrieta would be the best of the three starters the Yankees will see in this series even if he didn't seem to already have their number.