Share All sharing options for: Series Preview: Yankees vs. Twins 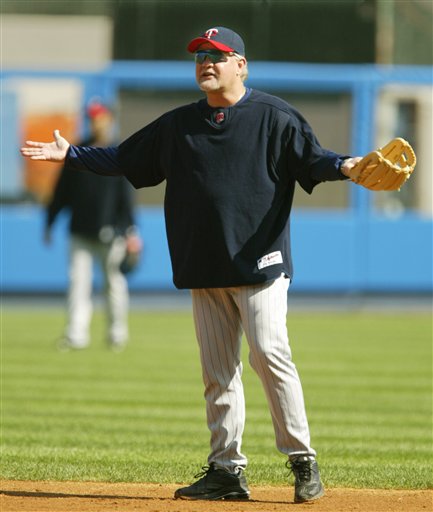 Ron Gardenhire has yet to find an answer for his team's struggles in the Bronx. (AP)

The Twins have gone 16-45 (.262) against the Yankees since Ron Gardenhire took over as their manager in 2002. That doesn't count their 2-12 record against the Bombers in postseason games, the component parts of four Division Series losses dating back to 2003. Add those games in, and Gardenhire's overall record against New York drops to 18-57, a miserable .240 "winning" percentage over 75 games. To put that in context, since the creation of the American League, just one team in either league has posted a winning percentage below .250 over a full season, that team being the 1916 Athletics, who won at a miserable .235 clip.

Against the rest of the major leagues over the same span, again including the postseason, Gardenhire's Twins have gone 977-746, a .567 winning percentage, equivalent to a 92-win season. In nine seasons, Gardenhire's Twins have never finished below third place, only once had a losing record, and have won their division in six of those nine seasons. Yet, they just can' t beat the Yankees.

Quite frankly, that's inexplicable. It's the sort of thing that seems likely to change as soon as you notice it. I'd call it a fluke if not for the fact that the trends have been so consistent over so large a sample (nearly a half season). The problem seems to lie less in the Twins' inability to beat the Yankees than in their inability to beat them in New York. Since 2004, the Twins have hosted the Yankees for eight series in Minneapolis and won five of them, but have gone 0-for-7 in series in the Bronx over the same span.

That begs a look at how the Twins perform on the road in general. Under Gardenhire, the Twins have been a losing team on the road, posting a .489 winning percentage outside of the Land of 10,000 Lakes and a .476 winning percentage from 2005 through their just-completed season-opening series loss to the Blue Jays in Toronto. A .476 winning percentage translates to a 77-85 record over a full season. Still, that's a far cry from .240 (the equivalent of a 123-loss season), and that number includes the Twins' relative success against the Yankees at home. Even if you lop off Gardenhire's 1-16 record against the Yankees in his first two seasons, chalking that up as a legitimate fluke, the remaining 17-41 only gets that winning percentage up to .293, and if you isolate the Twins' performance in the Bronx over those last seven years, there's really no way to salvage that figure.

In total, Gardnehire's Twins have gone 6-28 (.176) against the Yankees in the Bronx, with two of those wins coming in the postseason (in Games One of the 2003 and 2004 ALDS). In his nine years as Twins skipper, Gardenhire has won just four regular season games in the Bronx. Since 2007, he has won just twice against 15 losses (.118, regular and postseasons combined), and since 2008 he has won only once in 13 games in the Bronx, good for a .071 winning percentage, a number so absurd that I had to type it four times to get the zero on the right of the decimal point.

No matter how you slice it, Ron Gardnehire's Twins just can't seem to win in the Bronx, and here's little reason to believe that this year's squad will be different. The four games the Twins play in the new Yankee Stadium this week are their only games in the Bronx this year, and they're hardly storming in to the place. The Twins dropped two of three to the Blue Jays in Toronto to start the season, were out-scored 22-8 in that series, and barely hung on for their lone victory, a slim one-run triumph, in the series finale on Sunday.

Overall, the Twins did not improve over the winter. One would think they stand to gain from the healthy returns of Justin Morneau (concussion) and Joe Nathan (Tommy John surgery), and a full season of sophomore third baseman Danny Valencia (the third-place finisher in last year's Rookie of the Year vote), but Morneau was so productive in the first half last year that he was actually worth more wins above replacement in 81 games than he had been in any full season since winning the American League MVP in 2006. It wasn't even close. Morneau, off to a blazing .345/.437/.618 start last year, was worth four wins above replacement against an average of just 2.9 over the previous three seasons. Even if Morneau is able to return to that previous form, the Twins will still lose ground at his lineup spot. If he's not, they could lose a lot. What's more, while Nathan is back, three of the top four performers in the Twins' 2010 bullpen are not. Without Jon Rauch, Jesse Crain, and Matt Guerrier, the Twins will again be fortunate to simply hold the line, even with a solid comeback season from Nathan.

That's part of the reason that the twins were able to win seven more games in 2010 than they did in 2009 despite losing Morneau for half the year and Nathan for the entire season. Another part of that improvement was owed to the fact that they finally fielded viable regulars at second base and shortstop. Orlando Hudson, signed to a one-year deal worth $5 million, was worth 2.5 wins above replacement according to Baseball Prospectus's WARP. Shorstop J.J. Hardy, acquired from the Brewers for all-glove/no-bat center fielder Carlos Gomez, a product of the Johan Santana trade, was worth 1.9 WARP despite missing time due to injury. Those 4.4 wins replaced Orlando Cabrera's solid post-deadline addition showing (1.4 WARP), but also came at the expense of playing time for Brendan Harris (2009 WARP: 0.9), Nick Punto (-0.1), and Alexi Casilla (-1.2), who collectively were nearly a half win below replacement in 2009.

Then, this winter, the Twins led Hudson walk and inexplicably balked at giving Hardy an raise via arbitration, instead flipping him and Harris to the Orioles for a pair of minor league relievers. In their place, the Twins have signed Japanese veteran Tsuyoshi Nishioka and, unfathomably, have gone back to the (very dry) well with Casilla, a player who has been 1.4 wins below replacement in 310 career major league games.

I have my doubts about Nishioka as well. The 26-year-old switch hitter is coming off a big season with the Chiba Lotte Marines in which he hit .346/.423/.482, but that performance was completely out of line with his three previous big league seasons in Japan, and seems likely to have been largely propped up by an 86-point jump in batting average relative to the year before, a likely fluke that is unlikely to repeat itself on this side of the Pacific.

Nishioka hit .287/.361/.427 over his previous three seasons, which is nice production from a second baseman, provided he's able to repeat that line Stateside, but given the difficulties of adjusting to life and baseball in the major leagues, I don't think he will. The good news is that Nishioka's walk rate took a nice jump in 2009 and held in 2010, and he's still young enough to have taken a legitimate step foreward. The bad news is that, though he'll steal 25 bases a year, he does so dangerously close to the break-even point, having been successful in just 67 percent of his attempts in Japan and his already modest power is likely to take a hit both from the move to the U.S. as well as from the unfriendly dimensions of Target Field.

Getting back to this series, the Yankees benefit from facing the Twins while Nishioka is still getting his feet wet, and Morneau is still trying to get his feet under him. Morneau played in just three games in Spring Training and has appeared in just six games of any kind since July 7 of last year. He was 1-for-10 with a walk in the spring and repeated that performance in Toronto, his only hit being a broken bat single. Add in the struggles of Carl Pavano and Francisco Liriano in their season debuts (detailed below) and there's every reason to expect the Twins to start slowly, which is a recipe for another poor performance in the Bronx.

Sabathia's Opening Day start marked the first time since his Cy Young season of 2007 that he turned in a quality start in his first appearance of the season. He struck out seven against just two walks while allowing three runs (just two earned) in six innings and throwing 106 pitches. He'll start on normal rest in this game, leapfrogging Freddy Garcia in the rotation and thereby separating Garcia and Ivan Nova going forward.

Duensing's stats above are from his 13 starts in 2010 only. The 28-year-old lefty also posted a 1.80 ERA in 40 relief appearances last year thanks to a .256 opponents' batting average on balls in play in those appearances.

Pavano was awful in his Opening Day start in Toronto. In just four innings, he gave up eight runs (seven earned) on just six hits and two walks (though he also balked and hit a batter). Pavano actually retired six of seven batters in the second and third innings in that game, but gave up four runs in the first, a two-run jack to J.P. Arencibia in the fourth, and back-to-back homers to Jose Bautista and Adam Lind to start the fifth, leading to his removal.

Liriano was nearly as bad as Pavano in the second game in Toronto. He allowed "only" four runs in 4 1/3 innings, but gave up two home runs of is own, to the far less likely duo of Jose Molina and Jayson Nix. Even more problematic was Liriano's lack of control as he walked five men and uncorked a wild pitch in those 4 1/3 frames. Like Pavano, Liriano had two solid innings, allowing just one walk and no hits in his first two frames, but retired just six of the 15 men he faced thereafter.

Burnett, meanwhile, gutted through five solid innings on Saturday despite fighting through sinus and throat infections. He allowed just three runs on five hits while striking out six against just one walk (and a wild pitch, of course). Not bad for a guy who could barely hear, swallow, or breathe.