Share All sharing options for: Series Preview: Yankees vs. Tigers 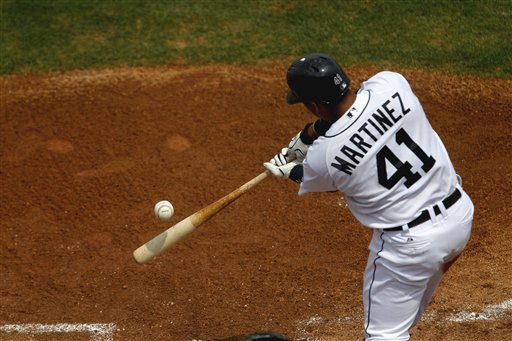 Signing Victor Martinez was the only significant upgrade the Tigers made despite having money to spend this offseason. (AP)

The Tigers were in position to make a big splash this offseason. With Magglio Ordoñez, Jeremy Bonderman, and Johnny Damon becoming free agents, and their obligations to Dontrelle Willis and Nate Robertson ending, the Detroit had nearly $60 million coming off the books from their 2010 payroll of $134 million just from those five players alone, and even with Justin Verlander's salary increasing by $6 million, had just $61 million committed for the 2011 season. They had a rare opportunity to both reduce payroll and hand out some big contracts to marquee free agents. Early winter rumors connected them to Victor Martinez, an obvious choice given the .223/.294/.330 their catchers hit in 2010, and Carl Crawford, who would have been a triples machine at Comerica Park.* As I wrote for my American League Central Hot Stove Preview at SI.com in early November:

It's not as though the Tigers lack places to spend their money . . . Outside of Miguel Cabrera, there's not a player in their lineup who couldn't be improved upon, and there are no hitters of note in their farm system behind [second baseman Scott] Sizemore, who is not necessarily a future All-Star himself. They could also use another starting pitcher or two while they wait for the arrival of 2009 ninth-overall pick Jacob Turner, as well as some reinforcements in the bullpen.

So what did the Tigers do with all of those available funds? They gave third baseman Brandon Inge a two-year extension in late October, bringing back a corner infield who had hit .231/.314/.389 over the previous four years for his age 34 and 35 seasons. A week and a half later, they re-signed deadline acquisition Jhonny Peralta to play shortstop, a position the Indians, a rebuilding team looking to cash in their veterans, would no longer let him play. Peralta has hit .252/.313/.383 over the past two seasons. In December, they brought back Ordoñez for $10 million for his age-37 season. They did sign Victor Martinez, but they signed him primarily to be their designated hitter. As for the pitching staff, they gave a three-year contract to set-up man Joaquin Benoit coming off a career year keyed by a .192 opponent's average on balls in play, then fleshed out the back of their rotation by signing journeyman injury risk Brad Penny (5.01 ERA, 5.4 K/9, and an average of just 19 starts the last three years) to his fifth team in four years and moving 28-year-old LOOGY Phil Coke into the rotation, Coke being a pitcher who didn't seem to have any chance of a major league career until he moved into the bullpen late in his age-25 season.

What a letdown. The Tigers' 2011 payroll projects to around $108 million, so it's not as though the Tigers didn't spend any of that money. They just didn't spend any of it particularly well, save perhaps for signing Martinez, though their plan to still use Alex Avila behind the plate for 100 games or so seems to undermine Martinez's value.

To be fair, PECOTA projects the 24-year-old Avila to make the jump to respectability this year, projecting him to hit .246/.328/.391, above average for a catcher and plenty to make him valuable in combination with his good defensive reputation (he threw out 32 percent of opposing basestealers in 2010). The Tigers also made a good move by taking 26-year-old outfielder Casper Wells north as part of their Opening Day roster. Wells is too old to be a real prospect, but he could prove a very valuable piece as a right-handed hitter with some pop who is a strong fielder capable of spotting in center. It will be interesting to see how Jim Leyland uses his roster, but it seems right now that Wells and the lefty-swinging Avila could find themselves in a complex platoon that would find Martinez catching against lefties with Ordoñez moving to DH for those games, clearing right-field for Wells. It's not Carl Crawford hitting 20 triples, but it's something.

The Tigers aren't a bad team. Justin Verlander and Max Scherzer, whom the Yankees will see in games one and three of this season (Brad Penny goes in game two), are a fantastic one-two atop the rotation, and Ordoñez, Miguel Cabrera, and Martinez are an impressive trio in the three, four, and five spots in the lineup. The problem is that all but Martinez were Tigers last year, when Detroit was a perfect .500. The Tigers played slightly better than that record last year (see their third-order record below the jump), and have made a number of modest improvements, Martinez among them. That should be enough to keep them in the race in the Central with the Twins (who come to town on Monday) having regressed by again neglecting the middle infield positions. However, the Tigers had a chance to take a big step forward this winter and blew it, which will most likely keep them from stepping into the postseason come October.