Share All sharing options for: There's Always a Catch 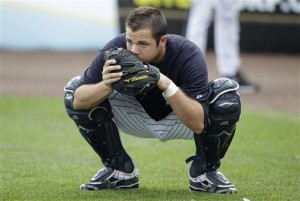 With Jesus Montero struggling, the Yankees could turn to Austin Romine as their backup to start the season. (AP)

A couple weeks ago, back when we were younger and had more hair, it appeared quite likely that Jesus Montero would break camp with the Yankees given Francisco Cervelli's injury and his own progress behind the plate. Alas, the 21-year-old backstop has been struggling both at and behind the plate, hitting just .222/.263/.278 in 38 plate appearances and failing to impress scouts and team officials with his defense. Reading between the lines of Brian Cashman's statements, it appears he may wind up starting the year at Scranton/Wilkes-Barre:

"He's been struggling with the bat, and I don't know if it's cause-and-effect. I just know that last year he didn't start catching well (in Triple-A) until he started hitting. And from June on, both went through the roof."

...[S]couts say Montero's defense has slipped again - that he's not moving well behind the plate, getting crossed up on pitches, rushing his throws, and generally giving off an indifferent vibe with his work habits.

Now, 38 plate appearances is a small sample size under the best of circumstances, and in spring training, it's nothing more than a Rorschach blot onto which people can project notions of progress or regress, comebackitude or lostitforevereness. But as Joe Girardi notes, it's not hard to find valid reasons for Montero's slow start:

The first time that you have an opportunity to win a job in the big leagues, I think almost everyone is going to put some pressure on themselves. Very seldom do you see a guy not. A lot of times you’ll see a guy do much better when they know they’re not going (to the big leagues)."

...(Montero) hasn’t hit like I think he’s capable of. Why? I don’t know. Maybe it’s because he’s not playing every day, maybe there is anxiety."

So if Montero does start the year in the minors, what then? While Russell Martin is hitting an uninspiring .222/.349/.306 in 43 PA himself this spring, he has at the very least shown that he's sufficiently recovered from last season's injuries to start the year as the team's regular catcher, though working him at the pace which Joe Torre did out in LA is hardly advisable. The thinking is that the Yankees could promote Austin Romine, who until lately has been the less-heard-from of the team's top two catching prospects. Romine's a full year older than Montero yet has never played above Double-A; last year he hit .268/.324/.402 in Trenton. He's got nowhere near the upside with the stick that Montero does — PECOTA forecasts a .251/.287/.382 line, compared to .285/.331/.471 for Montero — and while his mechanics behind the plate are better, he's not without his critics. "He's a messy receiver who stabs at pitches as opposed to receiving them, and while his arm is strong, he still struggles against the running game," wrote Baseball Prospectus' Kevin Goldstein while ranking Romine sixth among the team's top prospects (Montero was first).

Romine's just 3-for-20 himself this spring, but he's also been dealing with a death in the family; his cousin Jordan Stanton was killed in combat in Afghanistan earlier this month, and he left the team for a few days, as YES colleague Jack Curry writes in a moving piece. As for the jump from Double-A, both Cervelli and Girardi made it themselves, though the fact that neither is en route to Cooperstown isn't exactly the strongest endorsement for that strategy.

If Romine's up to start the year (with Montero back at Dunder Mifflin), it may just be as a stopgap until one of two things happen: either Cervelli gets healthy, or Montero hits and catches his way back into consideration. The latter may simply need a stretch of regular play — a bit harder to come by in spring training — to find his groove. But it's suddenly harder to see Montero getting the majority of the reps in a job share with Martin than it was two weeks ago, when we wore our rose-colored glasses and hope sprang eternal.