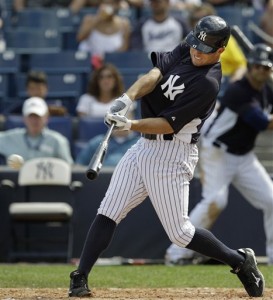 Leading off Brett Gardner is an idea whose time may have arrived. (AP)

Over the past several days, Joe Girardi has made minor waves by shuffling his batting order to put Brett Gardner in the leadoff spot and Derek Jeter in the number two hole. Such a move has been hinted at for weeks, but Girardi went out of his way to avoid tinkering with the lineup until March 15, and has only used the Gardner-Jeter lineup twice in the first five games since then due to the two players' off days.

As has been noted before, the gains to be had via shuffling the batting order are very small. Last week, the Star-Ledger's Marc Carig used David Pinto's lineup optimization tool to show that the difference between various iterations of the lineup with Jeter or Gardner leading off added up to just 0.033 runs per game, or just 5.3 runs per year, with several variants producing even smaller gains (the oft-cited 2.6-run gain hinged on the idea of batting Jeter eighth while Gardner led off, which ain't gonna happen). None of the iterations shown contained a Gardner/Jeter or Jeter/Gardner combo atop the lineup, so I ran two iterations myself, one which produced 5.25 runs per game with the Captain first, and the other which produced 5.261 per game with him second — a whisker lower than some of the configurations Carig cited, but negligible given the much wider margin for error which any player's performance extremes could produce. Drop Jeter from his Marcel-derived .350 OBP/.397 SLG to last year's .344/.370 mark, or bump it to his 70th percentile PECOTA projection of .362/.403, and it's going to have a bigger impact on scoring than whichever slot he hits in.

Before anyone starts claiming that the world will end if Jeter bats second, it's worth remembering that he's occupied that spot in a major league lineup far more often than he has led off over the course of his career. While Joe Torre intermittently dabbled with batting Jeter leadoff throughout his Yankee tenure, only twice in his first 13 seasons did Jeter have more than 62 starts at that spot, first in 1997 and again in 2005; the Yankees managed to overcome the severe handicap of batting him second by winning six AL pennants from 1996-2003. Girardi has been more aggressive about leading with Jeter, batting him first in a combined 284 games over the past two seasons. Regardless, Jeter's performances in those two spots are about as identical as they come:

Ladies and gentlemen, we have a ringer. Jeter's within two points on all three slash stats as well as the rate at which he grounds into double plays, which has been one of the arguments against moving him down the lineup, particularly as he's become such a wormkiller. To be fair, any good-sized sampling of his most recent forays in the two spot — say from 2006 onward, nearly 2000 PA — shows him elevated to .027, a difference of about four double plays a year.

For what it's worth — not very much given the smaller sample sizes — Gardner has been much more successful in either of the top two spots than he has buried ninth:

Gardner's actually been at his weakest when batting last, putting the lie to the claim that he's been an effective "second leadoff man" in that spot. It's not as though those starts in the nine hole all occurred while he was battling a wrist injury in the second half of last summer, either; he batted first or second in 20 of the 55 games he played from August 1 onward.

The bottom line is that the order in which Jeter and Gardner bat will matter a whole lot less than which version of each player shows up in 2011. If Gardner can be the pest he was before hurting his wrist in late June, through which point he'd hit .321/.403/.418, then Girardi ought to get him as many at-bats as possible high up in the lineup rather than waste him in the nine spot. The manager knows this. "What is the value of getting him an extra 70 or 80 at-bats a season?" he mused recently. If Jeter can adapt to his new swing to better fight off inside pitches and avoid hitting groundballs more frequently than nearly any other major league hitter, he'll add considerably more runs to the ledger than he would if he were simply a carbon copy of last year whether he's first, second or further down. Alas, moving him out of the top third "is not even an option," according to hitting coach Kevin Long, suggesting the organization is still somewhat gun-shy about stepping on Jeter's toes in the wake of the winter's contentious contract battle.

Without ascribing too much meaning to spring stats — they're more of a Rorschach blot than a performance measure — it's reassuring to see that both players are hitting well thus far after subpar springs in 2010. Jeter is batting .341/.372/.415 through 43 PA, and while he has only one double and and one triple, the fact that he's struck out just twice suggests he's making consistent contact. Gardner's hitting .286/.419/.486 with five doubles and a triple in 43 PA, which is considerably more muscle than he showed late last year, and a sign that his wrist is healthy.

As I write this, the Gardner-Jeter lineup is slated to battle Tampa Bay. Girardi has indicated that he'll likely maintain this configuration when the two players are in the lineup together in the near future, so don't be surprised if this comes to pass when opening day arrives.