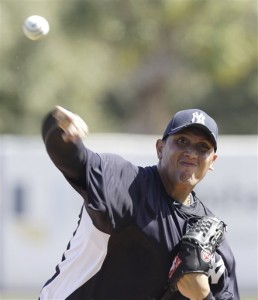 A point in Freddy Garcia's favor: he was well above average in delivering quality starts in 2010. (AP)

Today at Baseball Prospectus, I've got a look at an oft-misunderstood metric, quality starts. Invented 25 years ago by Philadelphia Inquirer writer John Lowe (now at the Detroit Free Press), a quality start is one in which a pitcher tosses at least six innings and allows no more than three earned runs. Many a mainstream writer — such as Murray Chass, nemesis of postmillennial knowledge — has complained that the stat potentially rewards a start in which a pitcher's ERA for the game is 4.50, a level to which the major league ERA has risen just eight times since 1950. Eager to find just how often such cases occur, and how the value of a quality start has changed over time, I dug in. The take-home points:

• Among major league starter, the frequency of a quality start is heavily tied to overall scoring levels. It has ranged between 45.8 percent in 2000 (when MLB scoring levels reached 5.0 runs per game for the first time since 1936) and 62.6 percent in 1968 (when they fell to 3.4 runs per game, the lowest level since 1908). Historically, it hovers around 50 percent, but last year (when scoring dipped to its lowest level since 1992) was just the second time it was above 50 since 1993.

• Teams receiving quality starts win about two-thirds of the time, ranging over time from a low of about 64 percent to a high of just above 70 percent and not surprisingly intertwined with scoring levels, though not as tightly as the frequency of quality starts are.

The unevenness of last year's Yankee rotation is quite apparent when one looks at their rates of quality starts:

The big man ranked eighth in the majors and fourth in the AL in quality start rate. The Mariners' Felix Hernandez (88 percent) and the Marlins' Josh Johnson (82 percent) topped their respective circuits, with David Price (81 percent) and Jered Weaver (79 percent) the other AL pitchers higher than Sabathia. Meanwhile, Vazquez had the eighth-lowest percentage among the 126 pitchers with at least 20 starts, and Burnett was 18th-lowest.

One of the interesting facets of the Yankees' ongoing rotation race is that Freddy Garcia actually fared quite well in this department. With 18 quality starts out of 28, his 64 percent rate ranked 39th, matching Zack Greinke, Cole Hamels, John Lackey and Cliff Lee, and edging Dan Haren, Jon Lester, Colby Lewis, and well ahead of three-fifths of the Yankees' regular starters including Hughes. Garcia's swollen ERA (4.64 overall) resulted from a wider-than-normal split in his starts; he posted a 2.73 ERA in his 18 quality starts, and a 10.57 mark in his non-quality starts. In the four worst of them, he combined to allow 25 runs in nine innings. As bad as this sounds, this is actually the way to go, minimizing the number of lost causes and staying competitive in the rest. On a team level, those that tend to concentrate their beatings are the same ones who outperform their Pythagorean records by a wide margin.

That performance wasn't exactly a fluke; Garcia owns a 58 percent career mark, the same as Andy Pettitte despite a career ERA 0.3 runs higher (4.13 to Pettitte's 3.83). Barlolo Colon is at 56 percent for his career despite an ERA 0.03 lower than Garcia's, and he hasn't been anywhere close to 50 percent since hurting his shoulder in 2005. It's all just one more reason to think that Garcia's got a spot waiting for him in the rotation so long as he stays health.