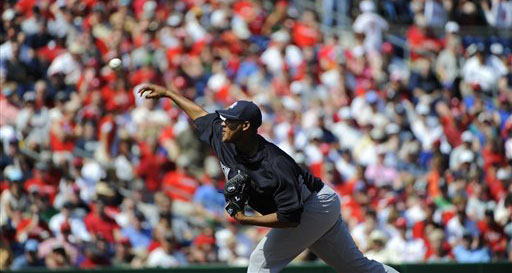 Ivan Nova got a nice head start in the rotation competition on Sunday. (AP)

The Yankees, led by Ivan Nova, handled a well-stocked Phillies team in their first road game of the spring.

Formidable Opponents: All of the Phillies starters except Chase Utley (patella tendonitis in right knee), all of whom stayed in for three plate appearances, two innings of Joe Blanton, and an inning each of Ryan Madson, J.C. Romero, and Brad Lidge.

Big Hits: Curtis Granderson (1-for-3, SB), smaked an opposite-field, two-run homer off a 94 mile per hour fastball from Double-A reliever Justin De Fratus. Jorge Vazquez, in his only trip, yanked a Brad Lidge curve low in the zone over the right-field wall, his second home run in three spring at bats. He singled in the other. Brett Gardner (1-for-1, 2 BB), Nick Swisher (1-for-3), and Jorge Posada (1-for-2, BB) each doubled over the course of four batters facing Triple-A reliever Mike Schwimer in the sixth, the latter two each driving in a run. Gardner took the first 13 pitches he saw in the game, drawing a pair of walks, then working a 3-1 count before doubling down the left field line on his only swing of the game.

Who Pitched Well: Ivan Nova couldn't have been much better. He sat 94 on the gun, hit 96, and showed a sharp curve. He used the curve to strikeout Ryan Howard looking by dropping it into the zone up and away. He struck out Domonic Brown swinging on a 93 mile per hour fastball in a similar location, and the other four outs he got in his two perfect innings all came on the ground. Dellin Betances struck out the side in a scoreless fifth, sitting 95 on the gun and hitting 97. He got Brown on a curve that dropped into the zone, then blew away Ben Francisco and Wilson Valdez with mid-90s fastballs. That said, his control was a bit shaky and he did walk Carlos Ruiz in the middle of all that. Sergio Mitre worked a solid inning, sitting 91, hitting 93, getting his three outs on a pair of grounders and a pop up, and allowing only an infield single.

Who Didn't: Buddy Carlyle (surprise) gave up a single and a two-run home run to Ben Francisco in the ninth. Adam Warren walked two and gave up an absolutely smoked RBI double to Francisco, using up his alloted pitches in just an inning and a third, though he did strike out Ryan Howard on a curve and, surprise, Domonic Brown on a fastball. He also nearly gave up a home run to Jimmy Rollins on a changeup only to have the wind hold it up. Meanwhile, despite solid results (each allowed just one baserunner), I didn't see either Boone Logan or Andy Sisco, both typically hard-throwing lefties, crack 90 on the radar gun.

Rotation Battle: Ivan Nova entered camp as a favorite to win a rotation spot and he showed why in this game. It's still very early, but he got a nice jump on his competition. Adam Warren didn't do as poorly as David Phelps on Saturday, but his long shot got no shorter. Supposedly Sergio Mitre was supposed to pitch two innings, but Joe Girardi wanted to get Boone Logan in against lefties Raul Ibañez and Ryan Howard in the fourth. Yet, if Mitre was really competing for a starting job, wouldn't letting him get his work in take priority?

Oopsies: A hard short-hopper off the bat of Wilson Valdez ate up Eduardo Nuñez for an infield hit in the bottom of the third. Melky Mesa tried to take second on a pitch in the dirt in the eighth but was thrown out by Eric Kratz

Ouchies: Ronnie Belliard was a late scratch at third base due to a sore calf and is expected to miss the next week. Jesus Montero fouled a pitch off his ankle in the second inning, then got crossed up on Mitre’s first pitch, which caught his right thumb. Gustavo Molina was hit in right bicep by a Brad Lidge pitch in the ninth. Neither Montero nor Molina showed any lingering discomfort.

Other: Jesus Montero looked good behind the plate. No one ran on him, but he showed soft hands, and did a nice job framing and presenting pitches, particularly that called third strike against Ryan Howard on Ivan Nova's high, outside curveball. During the game, Joe Girardi praised the progress he's made behind the plate. It didn't hurt his case that the Yankee pitchers he caught allowed just a pair of singles and no runs while he was back there, though he did have that one cross-up on the first pitch from Mitre. At the plate, Montero worked a long at-bat his first time up, fouling off many 2-2 pitches before scalding a line drive right at Placido Polanco at third. He grounded out to short on the first pitch his next time up, then delivered a solidly-hit broken-bat RBI single in his last trip.

Next: On to Lakeland to face the Tigers. Russell Martin is expected to DH. Mark Prior and Manny Banuelos will be among those following CC Sabathia on the mound.