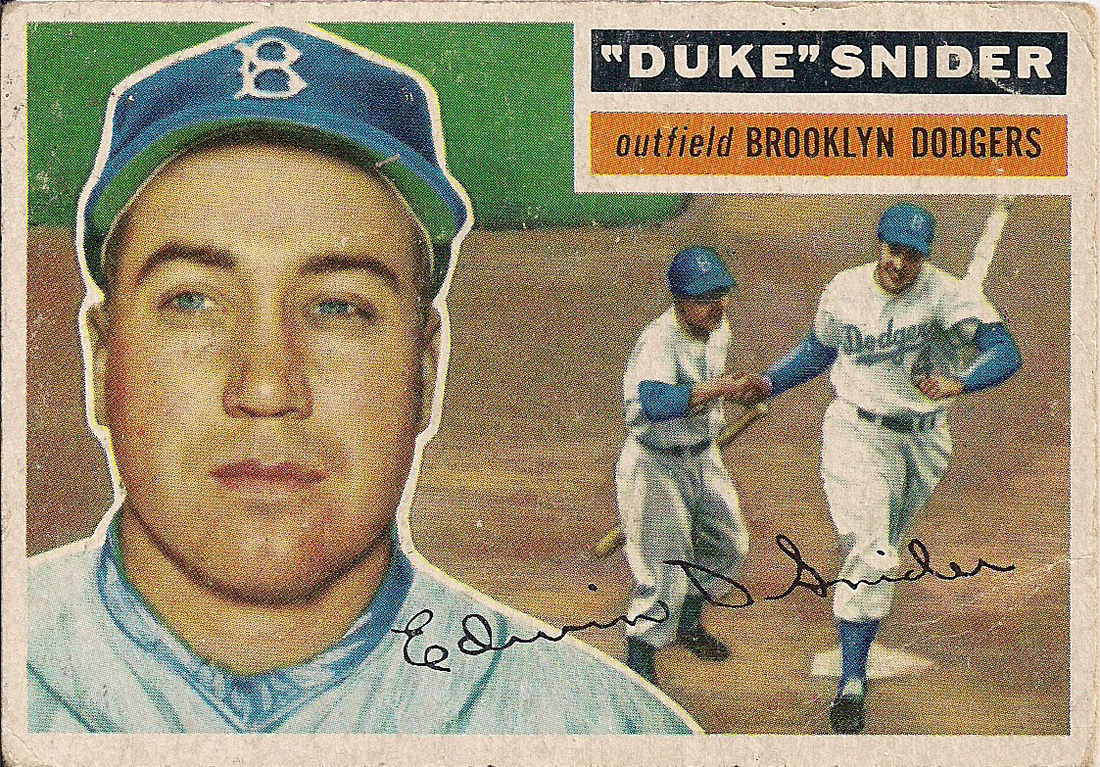 That headline should really be "looking back at Duke Snider," since none of us was alive when he played his last game. Still, Snider, who passed away on Sunday at the age of 84, looms large in the collective baseball memory for his central role in what is generally described as baseball's golden age, and even more so for Jay, who became a Dodgers fan at the foot his Brooklyn-born grandfather and who now lives in the borough, and Steve and myself, two kids who grew up in New Jersey devouring the history of New York's baseball teams. Snider's autobiography, The Duke of Flatbush, came out in the summer of 1988, which was the year that I really began pouring over the game's history, and Duke's book was my first in-depth introduction to the "Boys of Summer" Brooklyn Dodgers. I was so enraptured that I transcribed one particularly sentimental passage toward the end before returning the book to the library, and such a big baseball nerd that I took notes on Snider's life as I read.

Unfortunately, those pages weren't readily available to me last night when SI.com asked me to contribute a piece in Snider's memory. Instead, I stuck to the facts, focusing on Snider's exceptional peak and the four-years during which New York was ruled by the great center field triumvirate of Willie, Mickey, and the Duke.

Being widely and correctly regarded as the least of that center field trio has caused some to forget just how great a player Snider was at his best. During the peak of their rivalry, the gap between Snider and his crosstown counterparts was slight. Mantle and Mays were rookies in 1951, and because Mays lost all but 34 games of the 1952 and 1953 seasons to military duty and the Dodgers and Giants moved to California after the 1957 season, the era of Willie, Mickey and the Duke really only spanned the 1954 to 1957 seasons. Here are how those three Hall of Famers performed during those four seasons (using their seasonal averages in counting stats):

Snider's 1953 season, omitted above, was significantly better than his 1957 season. If we instead isolate the four years from '53 to '56 for Snider we get this line: .320/.415/.626 (165 OPS+), 42 HR, 123 RBI, 122 R, which puts him right there with Mays. Still, Mays has the edge in the park-adjusted OPS+. That points to the fact that Brooklyn's Ebbets Field was a great park in which to hit during those seasons, but Snider didn't just get fat on home cooking. Here are his road splits during that four year peak:

Bearing in mind that most hitters hit better at home, there's nothing there to support the criticism of Snider as a park-created phenomenon.

Snider was a great player, pure and simple. He didn't have the speed of Mays or Mantle, but he did everything else extremely well. He hit for average (.295 career, over .300 seven times, over .320 three times), had great power (he hit 40 home runs five years in a row from 1953 to 1957 -- only Babe Ruth, Alex Rodriguez, and Sammy Sosa have surpassed that streak -- and he slugged .600 three times and also led the league at .598 in 1956), got on base (.380 on-base percentage career with three full seasons over .400, another with a league-leading .399 OBP, and two shortened seasons over .400), and despite his modest speed, he was regarded as an outstanding center fielder. Snider never won a Gold Glove, but that was largely because the Gold Glove award wasn't introduced until 1957, his last great season, and for the first four years of its existence, the voters only selected one player from each outfield position, leaving Snider in Mays' shadow again.

Snider's position was every bit as significant as how well he played it. . . . In fact, the list of major league center fielders who hit like Snider at his peak is short: Mays, Mantle, Joe DiMaggio, Ken Griffey Jr., Hack Wilson, and perhaps Jim Edmonds. You can throw in Ty Cobb and Tris Speaker from the dead-ball era if you wish. Still, that's at most nine men, including Snider, in the 140-year history of the major leagues.

Worth noting, I avoided advanced stats such as WAR and WARP here because I place almost no stock in retro-fitted defensive stats from 60 years ago, and also because, as I explain, I also suspect those stats unfairly punish Snider for playing at Ebbets Field.

Steve and Jay both weigh in on Duke over at Baseball Prospectus, Jay giving him the full soup-to-nuts treatment, going beyond the stats with wonderful details such as this one:

Snider lost out to teammate Roy Campanella in [the 1955] NL MVP voting, finishing second by a mere five points. The result may have been due to an error: each player received eight first-place votes, but one ailing writer submitted a ballot with Campanella listed both first and fifth while leaving Snider off his ballot. The first place vote was counted, but the fifth place one was tallied as blank. Had Snider been listed fifth, he would have received six points, enough to give him the award. That was as close as he ever came to winning, though he did have six top ten finishes from 1950-1956.

I'd quote more, but there's just too much good stuff in Jay's piece. There's no subscription required to read it, so get on over there and read the whole thing.

Meanwhile, Steve weighed in with a quick blog hit on BP Unfiltered. I'll give him the last word:

It’s worth noting that Snider was a great World Series performer, hitting .286/.351/.594 in six series/36 games, all of this coming after an embarrassing rookie effort in 1949 in which he tried to crush every pitch he saw and ended up going 3-for-21 with eight strikeouts. He twice hit four home runs in once series, the second time coming in the Dodgers’ sole winning World Series effort against the Yankees. That progress in the postseason is testament to one of Snider’s best qualities: he was capable of learning. When he made the majors as a raw 20-year-old right out of the military, he took just three walks in 89 PAs, and Branch Rickey worried that he would never learn the strike zone. Though never as patient as Mantle, with some tutoring from Hall of Famer George Sisler, Snider became more selective and finished his career averaging 70 walks per 154 games.

Perhaps most importantly, he faced one of the great tests in baseball history and passed it—when Dixie Walker circulated a petition in the Dodgers’ clubhouse that insisted that Robinson not be added to the roster, Snider refused to sign. In fact, he called Robinson his boyhood idol, having seen him, years before, playing baseball, football, and running track. He wasn’t going to deny so great a talent on the basis of something so petty and irrelevant as skin color.

Snider was known as a cranky guy during his career, someone who had to be reminded to hustle occasionally. Still, he came through when it counted, both on and off the field, and that’s plenty to say about any person, ballplayer or not. Today we celebrate a great career and mourn the loss of a man. Our condolences to the friends and family of Edwin "Duke" Snider.