Share All sharing options for: A Few More Thoughts on Duke Snider 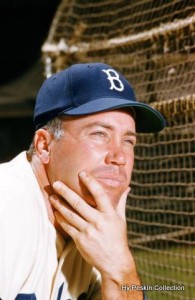 Cliff already hit most of the high notes in rounding up the three takes on Duke Snider offered by Steve, himself and myself at SI.com and Baseball Prospectus, but I'd just like to add a few more points, sharpening some of what I said in the piece and some of what I left out:

• First, though Snider's career numbers fall well short of those of Willie Mays and Mickey Mantle, it must be remembered that he was about five years older than both, debuting earlier (1947, compared to 1951 for the other two) and reaching stardom earlier (his first All-Star berth was 1950, compared to 1952 for Mantle and 1954 for Mays), so he was the standard by which the other two were measured — though the specter of the incomparable Joe DiMaggio loomed beyond all three.

• Second, Snider did have a bigger gap between his home and away hitting stats than either Mantle or Mays, which lessens the value of his eye-popping numbers a bit. Though he was hurt by the Los Angeles Coliseum late in his career, Snider's days in the Ebbets Field bandbox helped him wind up with a home field advantage of 79 points of OPS; his tOPS+ (think OPS+ relative to his performance as a whole, with 100 being average) was 108 at home, 92 on the road. Mantle's home OPS was 39 points higher than his road OPS, with a 104 tOPS+ at home, and 96 on the road. Mays' home OPS was just 22 points higher than on the road, with a 103-98 tOPS+ advantage.

• To put it another way, Baseball-Reference.com's AIR stat (in the Advanced Batting section of each hitter page), which is kind of like a park factor with historical league scoring rates thrown in as well, puts Mantle at 95, Mays at 99, and Snider at 107. Offense in Mantle's parks was cut by five percent relative to the historical average, and in Snider's parks boosted by seven percent. That's a big difference.

• Snider was anything but an automatic Hall of Famer. It took 11 ballots for him to gain entry, and in fact, the 17 percent he received upon debuting on the ballot in 1970 remains the lowest initial voting percentage of anyone to gain election since the Hall moved back to annual voting in 1966. Ironically, he gained entry in 1980, just a year after Mays went in on the first ballot.

• Terry Cashman's famous song, "Talkin' Baseball," which immortalizes the triumvirate, wasn't written until 1981, and it was released during that summer's players' strike.

• One thing which I tried hard to do over the course of my nearly 3,000 word piece was to explore how despite his grace and natural talent, Snider never had a smooth ride during his career. He was something of an enfant terrible, resentful of authority, prone to beating himself up, and something significantly less than a happy camper. He battled with his early managers, lashed out at the devoted Brooklyn fans, and told Roger Kahn that during the 1952 World Series, he was dreaming of avocado farming in southern California.

Just after the Boys of Summer excerpt that I included in the BP piece, Kahn recounts a conversation with Newsweek's John Larnder (a son of the famous sports scribe Ring Lardner), who offered a very perceptive take on not just on Duke's battles, but on human psychology: "You see, Duke thought that if his dream came true he would be a different person. He's not unhappy about the dream. He's unhappy that he is still the same man. Happens to a lot of us. We get somewhere we wanted and find we're still ourselves."

• Much of the information on Snider's tempestuous early years comes from Al Stump's epic 8,000-word 1955 piece for SPORT, which was a joy to stumble across. Also worth reading is the 1955 Sports Illustrated piece whose cover accompanied Cliff's piece;the unbylined piece doesn't spend a long time making the case that its title ("Duke or Willie? A Vote for Snider") promises, but it does point to the fact that Snider was the more established and more highly paid star at the time. The cover shot was by the renowned Hy Peskin, who also took the wonderful shot used to illustrate this entry.

Hero though he was, Snider's temper, self-doubt, and ups and downs both during his playing career and after (when he made bad business deals and ran afoul of the IRS) showed a human side to the public in ways that Mays and Mantle never did, or at least not while they were playing. In these eyes, that may make him the most fascinating character of the three, and hardly an afterthought in any consideration of the great trinity of center fielders.