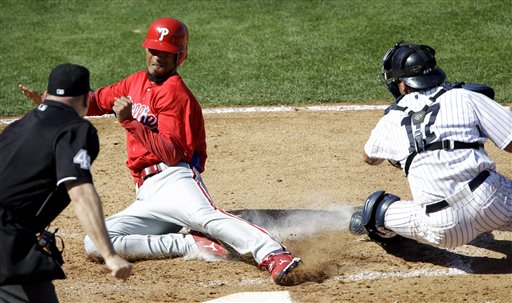 Wilson Valdez scores ahead of Francisco Cervelli's tag in the fifth inning. (AP)

The Yankees lost a see-saw game at home in their opening spring tilt. Check out my liveblog, or just skip to the highlights below.

Big Hits: The hit of the game was a monstrous two-run home run over the batters' eye in straight away center field by Jorge Vazquez (2-for-2). The ball cleared a 30 foot wall 408 feet from home plate. Vazquez replaced Mark Teixeira, who stayed in for three at-bats. In the last of those Teixeira (1-for-2, HBP), batting righty, blasted an RBI triple off the wall in the left-field gap. Francisco Cervelli (1-for-2) got the Yankees on the board with an RBI double down the left field line in the second. Alex Rodriguez (1-for-2) and Brandon Laird (1-for-3) also doubled. Andruw Jones walked twice in three tripes, striking out in the third.

Who Pitched Well: Joba Chamberlain, now starting his windup with his hands at his waist, hit 94 on the radar gun in a perfect third inning, striking out Wilson Valdez. David Robertson opened the fourth with five straight strikes against Ibanez and Howard, getting the latter to fly out, and facing four batters in the inning, walking one and striking out two. Hector Noesi worked a perfect sixth and stranded a pair of hits in the seventh, though he struck out no one and five of his six outs came in the air. Luis Ayala worked around an infield single for a scoreless ninth.

Who Didn't: David Phelps started the fifth with two quick outs, but then gave up three straight hits, including a rocket double off the bat of Pete Orr, of all people, and two runs. He got out of the inning, but used up his allotted pitches for two frames. Eric Wordekemper, protecting a one-run lead in the eighth, gave up two runs on three hits and a walk and took the loss. Only one of the singles was hit hard, but he was facing second- and third-string players.

Rotation Battle: Bartolo Colon hit 93 with his fastball and varied the speed and movement, but he sat around 89 with it and one of the two hits he gave up in his two innings was a triple on a sinker that didn't sink and thus became a batting-practice fastball down the middle at 89 mph. He worked around a single in the first, and the one run he allowed was that triple scoring on a double-play, so the results were solid, but he didn't strike anyone out and three baserunners and a run in two innings isn't all that impressive. Hector Noesi looked as good or better, also showing 93 on his fastball, but faced inferior batters and also didn't record a strikeout. David Phelps put himself in an early hole.

Oopsies: Nick Swisher misplayed that triple of Colon by taking too shallow of an angle to cut off the ball. He might not have cut it off if he took a deeper angle, but he might have been able to hold the runner to a double. Colin Curtis had three plays in left that you couldn't really blame him for not making, but nonetheless made him look a bit lost, losing a foul pop in the sun, colliding with the wall on a big hit, and taking an initial step back on a ball that ultimately dropped in front of him. Francisco Cervelli failed to block a David Robertson curve in the dirt on the Phillies only stolen base attempt of the game. Andruw Jones went to early on a steal attempt against lefty Ryan Feierabend and was picked off (officially a 1-3-4, or was it -6, caught stealing)

Ouchies: Mark Teixeira fouled a ball off the top of his left foot in his first at-bat, but showed no ill-effects and stayed in the game longer than any other Yankee starter.

Other: Brian Schlitter, who was claimed off waivers by the Phillies when the Yankees designated him for assignment last week when Andruw Jones' deal became belatedly official, didn't pitch well, giving up Vazquez's monster two-run homer, but thanks to Wordekemper's blown save, he did get the win . . . The Yankees held a pre-game ceremony to dedicate a statue of George Steinbrenner that stands outside George M. Steinbrenner Field.

Next: A rematch against the Phillies in Clearwater with Ivan Nova getting the start for the Yankees and Jesus Montero scheduled to start behind the plate. On YES at 1pm, MLBN at 8pm (tape delay).