What To Watch: Yankees Exhibition Games

Share All sharing options for: What To Watch: Yankees Exhibition Games 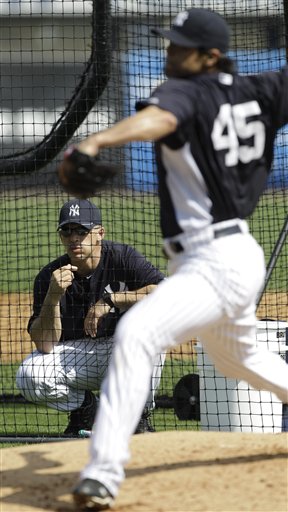 Yankee manager Joe Girardi will have a lot of decisions to make this spring. (AP)

We don't do regular-season game recaps here at the Pinstriped Bible, largely because we prefer to focus less on what happened than why and what it means, but also in part because the market is already flooded from the nine beat writers and top blogs, such as my alma mater Bronx Banter and our YES Network compatriots River Avenue Blues. However, since 2006, I've provided capsule summaries of every Yankee Spring Training game and intend to continue doing so here this spring.

My doing so was initially a response to what I felt was a dearth of coverage of spring games, which despite their relative insignificance do help quench the thirst for baseball that develops over the winter and often give us some mouth-watering early looks at top prospects, new faces, and returning favorites. That dearth no longer exists in our post-Pete Abraham world, in fact MLB.com now runs capsule reviews of the games that greatly resemble my own, but I still feel like my capsules provide a unique, quick-scan summary of the game that is concerned not with the result or the score, but with who played in what role and how well. After all, spring exhibition games are about individual player performance and position battles above all else.

My first game capsule will run Saturday night, after my annual liveblog of the Yankees' opening exhibition game (a tradition that dates back to 2004), which this year will take place at 1 pm against the Phillies with Bartolo Colon and Cole Hamels drawing the starts at the Boss. In anticipation of that game and those that follow, here are a few things to watch both on Saturday and beyond.

First thing's first. The Yankees' spring rotation will start this way: Colon, Ivan Nova, CC Sabathia, Phil Hughes, A.J. Burnett, Freddy Garcia. In the early games, starters typically only throw two innings and are followed by another starter who will throw another two innings. With top prospects Manny Banuelos and Dellin Betances not being considered for the major league rotation, those shadow starts are likely to go to Andrew Brackman, David Phelps, Hector Noesi, Adam Warren, D.J. Mitchell, and Sergio Mitre, though I've only been able to confirm the last of those (via the Star-Ledger's Marc Carig, who concurs with that accounting). Carig also reported this morning that Brackman has a sore groin that will keep him from throwing until early next week. That won't necessarily force him to miss a shadow start, as the rotation won't turn over until Friday, but it will certainly bear watching. Once the primary starters need to go deeper into games, we're likely to see the veterans pitch simulated or minor league games in order to allow the Yankees to continue to evaluate the rest against "major league" competition.

I put major league in quotes there because Spring Training offenses are a mix of major league stars all the way down to raw minor league prospects, non-prospects, and non-roster hangers on. For most of the exhibition schedule, the major league regulars will come out of games half-way through, leaving those pitchers working the final few innings to face a collection of minor leaguers. That's why you'll see the Yankees' top relievers work the middle innings rather than their customary seventh, eighth, and ninth. That also makes it difficult to evaluate the peripheral relievers who do work those late innings. Of course, the same is true for the hitters who face a wide range of pitchers. For that reason, spring statistics, small samples compiled against inconsistent competition, are useless as predictors of regular season performance. Still, when a player struggles or thrives, it will show up in the stats, so I'll continue to refer to them if only to provide comparisons between players competing for jobs and to give a general sense of who's hot and who's not.

Speaking of devaluing spring stats, don't pay too much attention to pitching performances early on. Pitchers are just building arm strength in their first couple of appearances. Often times they'll avoid more strenuous breaking pitches, which often leaves them without one of their best weapons, or they'll focus on a pitch they're trying to develop, which means they'll lean heavily on what might be their weakest offering. A simple rule is that no pitch in February means anything, but that's probably true for the first week or so of March as well.

Do pay attention to where players play. If Joe Girardi plays a player somewhere other than his usual position, it's because he wants to see if that player is viable elsewhere on the field. Last year, the Yankees gave Kevin Russo a lot of time at shortstop because they wanted to see if he would be viable as a full-service utility infielder despite not having played much short in the minors. This spring, Brandon Laird could play all four corners (third and first base, left and right field) to gauge his viability as a utility player, while Ramiro Peña might spot in the outfield, Jorge Posada is likely to play some first base, and Russell Martin and Francisco Cervelli might see some time at third. I list the starting lineups and the subs with their positions in my capsules largely to show who is getting a look where.

Getting back to the mixed construction of spring lineups, note that not all of the starters travel for road games. While the starting lineups for home games might often resemble a potential Opening Day nine, road games typically see three or four of the team's regulars stay behind for a day off or additional coaching/practice/conditioning. Their absence gives us a chance to see how Girardi might adjust to injuries, both in the field and the batting order, but more realistically, it's just a less informative lineup. Incidentally, Mariano Rivera almost never travels for road games. If you're watching one hoping to see him pitch, you won't.

As for individual players to watch. Everyone will be watching Jesus Montero's work behind the plate closely, and we should get to see more of it this spring than we did last as Girardi sounds very open to the idea of taking Montero north as the backup catcher, and Russell Martin's knee could allow Montero to assume an even larger role. Austin Romine and Francisco Cervelli will be Montero's competition for that backup spot, but don't look for Jorge Posada to get any work behind the plate as the Yankees are worried about his concussion history (remember Cervelli got a concussion early last spring, which is why he switched to the oversized batting helmet).

Keep an eye out for the changes Kevin Long has made to the swings of Derek Jeter and Mark Teixeira, and watch to see if Curtis Granderson is still using his post-adjustment approach which helped him spank lefties down the stretch last year. I'm less curious about Nick Swisher's ability to maintain his Long-authored approach given that he used it all of last season.

The Yankees seem interested in having the fourth man on their bench be a corner infielder with some pop, so keep an eye on Laird, Eric Chavez, and Ronnie Belliard, who will be competing for that role. If all struggle, it could open the door for a fifth outfielder such as Justin Maxwell, Greg Golson, or Colin Curtis, with the newcomer Maxwell the early favorite. The backup infield spot will go to either Ramiro Peña or Eduardo Nuñez, with Peña the incumbent, but Nuñez the better all-around player.

Beyond the rotation battle, I'll be anxious to get any sort of look at Betances or Banuelos in game action, though both could be early cuts. The bullpen is largely set, but the Yankees do have two Rule 5 picks who will vainly attempt to avoid being sent back to their former teams in lefty Robert Fish and righty Daniel Turpen. Similarly, Romulo Sanchez is out of options and thus has extra incentive to try to make the club. The Yankees also have some compelling stories in the pen in Mark Prior, who is a mystery even to himself, converted outfielder Brian Anderson, and massive lefty Andy Sisco. I don't expect any of those pitchers to make the team, but they add a little bit of flavor compared to duds like Luis Ayala, Buddy Carlyle, and, frankly, likely seventh man Sergio Mitre.

Of course, for more casual fans, there are always the new faces from old places wearing pinstripes for the first time: Martin, Andruw Jones, Rafael Soriano, and Pedro Feliciano. I'll admit that a recent photo of Andruw Jones wearing a Yankee uniform and taking instruction from Joe Girardi made my brain hurt, even though I very much approved of the signing. There will be aches and pains, though hopefully no major injuries, and the herd will slowly be thinned out with non-roster players being reassigned to minor league camp or rostered players being optioned, designated for assignment, outrighted or even released. I'll cover it all in my capsules, though certainly, Steve, Jay, and myself will have plenty more to say beyond them.

The most important thing: there's a Yankee game tomorrow at 1:05. Hope to see you here, then.