Should the Yanks Let the B's Be?

Share All sharing options for: Should the Yanks Let the B's Be? 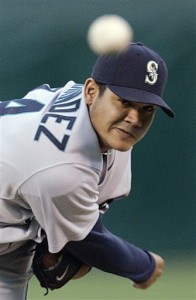 It's all well and good to be armed with young pitchers, but they're not going to grow up to be Felix Hernandez just because you promote them at a young age. (AP)

Reading Steve's recent piece about the supposed dangers of rushing young pitchers, I was struck by something that inspired my column today at Baseball Prospectus:

Missing from Steve's analysis was any acknowledgment of the amount of minor-league experience those pitchers had before reaching the majors, particularly in the upper levels of the minors, where the higher caliber of play is more indicative of players who have made progress in converting their tools into skills, and from where pitchers most commonly jump to the majors. [Dwight] Gooden may have made the leap directly from A-ball to the Mets, but [Felix] Hernandez tossed 57 1/3 innings at Double-A in the season before his debut, and another 88 at Triple-A before his late-season recall by the Mariners. [CC] Sabathia had 90 1/3 Double-A innings under his ample belt before breaking camp with the Indians the following spring. That's an especially salient issue when it comes to the Yankees' tyros: Banuelos, who turns 20 next month, has just 15 1/3 innings at Double-A to date, while the going-on-23-year-old Dellin Betances, whose progress up the ladder was forestalled by Tommy John surgery in 2009, has just 14 1/3 innings at Double-A.

Does the amount of minor-league experience really matter? With the data wrangling help of Colin Wyers, I decided to investigate if the amount of upper-level experience provided any clues as to a pitcher's future success, both in the short term or the longer term. I gathered data going all the way back to 1980 to allow myself the ability to examine whether such clues had changed over time.

To start with, 2,632 pitchers made their major-league debuts from 1980 to 2010. Using the standard July 1 age cutoff, those pitchers ranged from 19 (Gooden, [Ed] Correia, Rick Ankiel, Jose Rijo, and seven others) to 39 (Japanese import Masumi Kuwata), with a mean age of 24. The pitchers posted a collective ERA of 4.65 in their debut seasons; during that time, the major-league average was 4.20. Over the course of their careers, those pitchers' collective ERA would come down to 4.28, while throwing an average of 340 innings and compiling an average of 4.4 WARP (some of these pitchers are of course still active). For their debut seasons, the average number of innings thrown was 33, the average WARP accumulated was 0.3.

From there, I limited the data to pitchers 23 and under, and then to 21 and under. In neither case did I find any useful correlation between upper level innings and big league success in the short or long term.

Pitchers such as King Felix who despite their youth had a significant amount of upper level experience weren't especially more likely to succeed than pitchers who barely had time to unpack their bags in the high minors, or those like Doc Gooden who jumped straight from A-ball to the majors.

What I did find was that the more recent debuts have significantly less experience under their belts by the time they reach the majors, whether due to more college-level experience, or to pitch counts and innings targets. A pitcher debuting from 2000-2010 averaged 51 fewer innings at Double-A and Triple-A than one from 1980-1989. Is that terribly useful when discussing Banuelos and Betances? Not really. Unsurprisingly, pitcher development is a more complex beast to wrestle with. Scouting information and a broader set of data regarding pitcher performance are both needed.

What is clear is that the Yankees don't think either of these Killer B's are suited to break camp with the big club, a view also held by many a prospect expert. ESPN's Keith Law suggested that Banuelos could serve as the Yankees fifth starter this year "if the need arose," but has also stated that "he's a few refinements away from being able to help the big club," while Betances "still has a lot of work to do as a pitcher." BP colleague Kevin Goldstein opined in an IM discussion that neither pitcher has enough experience yet or "is anywhere near ready." He also cautioned against extrapolating from the most successful cases to the particulars of young pitchers simply based upon age: "Felix and CC are crazy unique players, outside any range where they can be a learning experience."

The bottom line is that these kids may be able to help at some point in 2011, but the Yanks are best served by giving them enough time to show they're ready. That's not going to happen over the next five weeks of spring training, so it's probably for the best that the Yankees have taken the pressure off them to make the opening day cut.