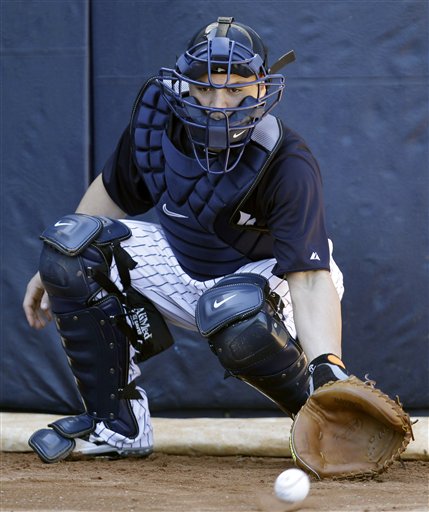 Russell Martin's right knee will keep him out of Saturday's exhibition opener. (AP)

No news is good news in the two weeks between Pitchers and Catchers and the first exhibition game of the spring. When practice and platitudes are all that come across the wire from your favorite team's camp, all is well. That has largely been the case thus far for the Yankees, but with the exhibition schedule set to start on Saturday, one red flag has been raised with the news that intended Opening Day catcher won't start the exhibition opener due to a continued discomfort in his surgically repaired right knee.

I typically make light of the various aches and pains that pop up at this time of year, but Martin's bum knee is a perfect storm of a player, position, and body part that demands more sober attention. Martin saw his 2010 season come to an abrupt end when he suffered a hairline fracture in his right hip on August 3, putting a violent end to his days with the Dodgers. Martin's discomfort is not in the hip, but in his right knee which he injured during his rehabilitation workouts during the offseason, tearing his meniscus and medial collateral ligament (MCL). Martin had surgery on the knee on December 20, after the damage was detected during his Yankees physical. The surgery corrected only the meniscus with the idea that the MCL would heal in the time it took Martin to recover from the meniscus surgery.

What I can't seem to find, however, is mention of the severity of the MCL tear. Recovery from a Grade II tear typically takes three to four weeks, but full recovery from a Grade III tear can take three or four months. Based on the Yankees' belief that Martin's MCL would heal along with his meniscus, I'd guess that they diagnosed him with a Grade II tear, which is a partial tear compared to the full Grade III tear, but with Martin still feeling discomfort in the knee nine weeks after his surgery, I wonder if the tear was worse than diagnosed, or if Martin was too active too soon after the surgery.

Indeed, it's the MCL that worries me. Meniscus repairs are fairly routine. Some fans might remember that Bernie Williams tore his meniscus in May 2003, promptly had surgery, and returned to center field less than seven weeks later. CC Sabathia and Jorge Posada both had torn menisci repaired early this offseason and have reported no problems thus far in camp. Of course, none of those players had to get back behind the plate. None of them had torn MCLs, either. In tearing his meniscus and MCL, Martin has hit two of the three elements of the "unhappy triad," the last being the ACL (anterior cruciate ligament), which famously wiped out Aaron Boone's 2004 season. An ACL tear is the worst of those three, but when they happen to a catcher, two out of three are bad enough.

Having sounded those alarms, Martin has been catching in camp, catching his share of bullpens and batting practice, including live BP on Wednesday. The only thing he hasn't done yet is a blocking drill, as that would require him to land hard on his right knee, directly jamming the joint into the ground. Still, that's a crucial aspect of his job behind the plate, and a major test for the knee. Martin was supposed to do his first blocking drills on Wednesday, but again didn't because his knee still didn't feel right.

Filtered through Joe Girardi, Martin's complaint is that his knee, "doesn't feel quite the same as it did before." Both Martin and the Yankees say they are being overly cautious so as to avoid a setback, as well they should at this point in the year, but it's clear something isn't right with Martin's knee at the moment. Girardi has speculated that Martin will be ready to catch in a game sometime next week, but added, "that would be my hope that’s all it is, but if it takes more, it takes more." Under Girardi, "three or four days" has had a habit of turning into a week or two followed by a stint on the disabled list, but the reality is that Girardi has no idea when to expect Martin to be ready, and Martin likely doesn't either.

That could make an already interesting catching situation even more compelling in the coming weeks, as the door may open back up for Jesus Montero to take the job (Girardi dropped Buster Posey's name in discussing Montero the other day, a good indication that he recognizes Montero's potential impact), but that's getting a bit ahead of the story right now. For now, the Yankees have a catcher they signed to a one-year make-good contract coming off an injury and two years of poor performance at the plate, and he's now officially unable to answer the bell for the exhibition opener. Maybe a week from now he'll be catching Freddy Garcia's first exhibition start as a Yankee and all of the above will be moot, but I don't plan on holding my breath.

Programing Note: Per my tradition, I will be liveblogging Saturday's exhibition opener against the Phillies here on the Pinstriped Bible. Bartolo Colon will start for the Yankees against Cole Hamels at George M. Steinbrenner Field at 1:05 EST. My liveblog will begin at 1 pm.