Posada's Cabeza, Revisited (Does This Ring a Bell?)

Share All sharing options for: Posada's Cabeza, Revisited (Does This Ring a Bell?) 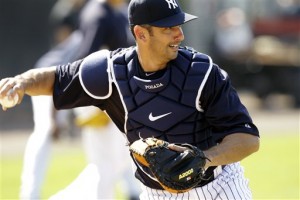 The sight of Jorge Posada in catching gear is going to become increasingly rare. (AP)

I don't follow college or professional football anymore. Part of that is simply a byproduct of writing about baseball on a year-round basis, with a peak intensity that parallels the football season, from September through December, though I know plenty of peers who manage to keep a bead on things. I'll check out the major bowl games and playoff games; I'm red-blooded enough to tune in to the Super Bowl or the national championship game, abject fraud though the BCS may be.

Without a doubt, the larger reason for my diminished enthusiasm for football is the growing knowledge of the horrific long-term effects of concussions. Players I grew up watching and revered as some of the toughest ever to don helmets — such as former Pittsburgh Steelers center and Pro Football Hall of Famer Mike Webster — have been turned into shells of human beings by severe dementia, which is believed to be caused by chronic traumatic encephalopathy, the repeated injury of the brain by blows to the head. A chilling and utterly heartbreaking five-part ESPN profile by Greg Garber back in 2005 detailed Webster's bouts of homelessness, his self-application of a Taser to alleviate his back pain, his hazy attempt to glue rotting teeth back into his mouth using Super Glue, and other indignities leading up to his death in 2002 at age 50. A seminal 2009 GQ article by Jeanne Marie Laskas led with Webster tale of misery and detailed forensic pathologist Dr. Bennet Omalu's discovery of the common clinical link between his premature demise and that of 16 other deceased NFL players. Omalu described one, Philadelphia Eagles defensive back Andre Waters, as having brain tissue characteristic of an 85-year-old Alzheimer's patient. Waters was 44 when he committed suicide in 2006.

With the NFL slow to come around to the reality of the dangers of concussions, in part because the league employed a quack named Elliot Pellman as its top medical advisor, the New York Times' Alan Schwarz turned his attention from baseball to the concussion beat. Best known for his baseball coverage at the Times, Baseball America, and ESPN, not to mention his authorship of the wonderful The Numbers Game: Baseball's Lifelong Fascination with Statistics, Schwarz has now penned over 100 articles devoted to the topic, not only at the NFL level but also down through the amateur ranks. A recent New Yorker piece by Ben McGrath profiled Schwarz's efforts amid football's slow acceptance of the growing body of evidence of its sport's dangers.

The problem isn't going away, either. Just last week, former Chicago Bears safety Dave Duerson committed suicide by shooting himself in the heart — after leaving explicit instructions for his family to donate his brain to the cause of further research. In a bitter irony, the former star had been part of a six-member union panel which considered retired players' disability claims against the NFL prior to the onset of his own cognitive problems. Some of those cases had to do with depression and cognitive impairment, both linked to repeated brain trauma.

As I wrote last fall in the context of Jorge Posada's concussion scare, baseball has been a few years ahead of the curve relative to the NFL when it comes to concussions, though individual teams' responses haven't been uniformly enlightened. The crosstown Mets bungled matters in the immediate aftermath of head injuries involving Ryan Church and Jason Bay, but the Yankees have taken a better-safe-than-sorry approach in such matters. Though Posada was found not to have sustained a concussion after being forced out of a game by a foul tip against the Orioles last September 7, the Yankees followed a protocol which included a battery of tests, which they measured against a baseline taken in spring training. Last week, the Bergen Record's Bob Klapisch detailed the findings:

Although a CAT scan revealed no bleeding in the brain, the Yankees nevertheless had Posada undergo a comprehensive memory test. The computerized program, called ImPACT, was designed at the University of Pittsburgh concussion center. It runs for 15-18 minutes, measuring attention, memory, processing speed and reaction time.

Some NHL and NFL football teams use ImPACT, but it’s universally employed in the big leagues, including umpires. Players are tested in spring training for baseline readings, then tested again after any incident that might involve a head injury – a collision at home plate, for instance, or crashing into an outfield wall, or in Posada’s case, a direct hit from a foul tip.

Posada said the test results were “not good” after the September incident. In fact, his results were subpar in two of the three tests he took in 2010. Does this mean Posada is at risk for brain damage? No one knows for sure, but the data is troubling.

...Researchers say the key to protecting oneself is not getting that first concussion. Once that threshold has been crossed, the brain is more susceptible to the biochemical changes that account for dizziness and nausea in the short term, and possibly dementia down the road.

Deeper in the article, Klapish discusses the position-specific dangers of concussions with former Giants catcher Mike Matheny, a 13-year veteran backstop who was driven into retirement by the cumulative effect of numerous foul tips off his mask, Butch Wynegar, who caught in the majors for 13 years and is now the Yankees' catching instructor, and Yanks manager Joe Girardi, who caught in the bigs for 15 years. Furthermore, he notes that the Yankees are serious about minimizing Posada's time behind the plate going forward.

As if on cue, Wednesday's beat reports found Girardi reiterating that stance. According to the Newark Star-Ledger's Mark Carig, "Posada may not catch in any games during spring training though he will catch bullpens to stay sharp. He is transitioning to his role as a full-time designated hitter." Via ESPN New York's Wallace Matthews, Girardi reiterated, "We're just keeping Jorge's catching skills sharp.''

The word via LoHud's Chad Jennings was somewhat less definitive; with Posada slated to catch his first bullpen on Thursday, the Yankee skipper allowed that his future behind the plate is tied to the progress of the team's other backstops. "We’ll just see how that goes, how the competitions are going," he told Jennings. In other words, the Yankees may still need Posada to retain some passing relationship with the tools of ignorance, particularly with the recent revelations regarding Russell Martin's knee and with Jesus Montero — profiled here by YES Network's own Jack Curry — still trying to convince the brass that for him, the future is now.

Posada isn't the only player whose noggin is in the news. Much attention this spring is focused on the Twins' Justin Morneau, who missed the entire second half of the season as well as the postseason due to a concussion sustained on July 7. Though he admits he's still less than 100 percent recovered, earlier this week, Morneau was finally cleared to begin working out with the team after a month of incident-free training on his own. The Canadian-born first baseman has a history of concussions dating back to his days playing junior hockey, which is one reason for the extra caution with which he's been treated. The other, as described by Baseball Prospectus' new injury analyst, Corey Dawkins, is that the three-dimensional nature of his injury amplified the severity:

There is no telling what causes the length or severity of the symptoms, but anecdotal evidence suggests that the forces that produce a rotation of the head along with movement in the two planes (imagine whiplash, but with a rotational component) increase the possibility of severe symptoms. That's exactly what happened with Morneau: his head was bent forward, towards his left shoulder, and it rotated to the left as he was hit by John McDonald’s knee.

Here's hoping Morneau makes it back to full strength, and that concussion awareness continues to remain a priority in baseball. If that means seeing less of Posada behind the plate and more of Martin, Montero, or even the occasionally insufferable Francisco Cervelli — no stranger himself to concussions, as his oversized batting helmet reminds us — so be it.