Share All sharing options for: Can Brandon Laird Make Joe Girardi a Genius? 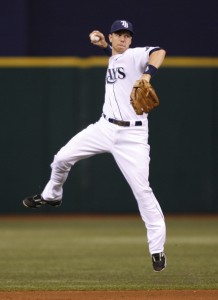 Ben Zobrist: With Brandon Laird, the Yankees are trying to capture some of the roster flexibility the infielder/outfielder grants to the Rays. (AP)

The jolly guys at LoHud report that, as was anticipated,"Joe Girardi has already told [Brandon] Laird that he’ll be playing all over the place during the exhibition schedule." Laird has a nice power bat, but he’s blocked at both infield corners, so the Yankees will try to turn him into a four-corner sub. In this era of pitching-congested rosters, the more positions your players can play, the more flexibility lost to your 18th-best left-hander you can restore.

A four-corner sub (first base, third base, left field, right field, for those that missed the opening credits) has value, particularly if he can hit the ball over the fences—think of Eric Hinske. The problem with Laird is that from the moment he left Double-A, he completely forgot how to take a walk, which compromised his batting average and power, leaving only an eerie smile which slowly faded away in the crepuscular dim. We won’t get too carried away in looking at that small sample, but the Lairdian walk rate is definitely something to keep an eye on.

It’s good that the Yankees are trying to mint themselves a multi-position sub who also could be an above-average hitter. As I suggested at BP today in a pice titled, "Genius + Zobrist = Maddon," this kind of player helps a manager accomplish his number one goal in making out a lineup—staying away from replacement-level players. If you have a Ben Zobrist, Chone Figgins, Tony Phillips, or another player of that type, you never have to write "Ramiro Pena" into your batting order.

All three of those players have something in common: they started out as shortstops, so they were able to play the middle infield when needed. Even if they weren’t ideally qualified to play a that position every day, a game here or there wasn’t too much of a stretch and second or third was a cinch. Add in enough speed to play the outfield and you have a player who can move around enough that you can get an extra outfielder into the lineup even when an infielder is hurt. Imagine if Robinson Cano needs to miss give games with a tight hamstring, and instead of putting Pena or Eduardo Nunez in the lineup, Joe Girardi could plug in Andruw Jones because Brett Gardner was capable of taking over at second base. That’s the benefit of those players.

Laird won’t have the same value because he’s been a corner guy all the way throughout his career, and the middle infield seems a bridge too far. The same goes for Kevin Russo, a third baseman the Yankees have tried in the outfield. Still, the fact that they’re trying says something very positive. The Yankees have a history of getting great results out of this kind of player back in the Casey Stengel days, and his ability to cover for injury without devoting too much playing time to a Pena antecedent like Willie Miranda was an incredible advantage over the competition. It’s nothing more than a coincidence, but the one year that Miranda did play, due to an injury to Phil Rizzuto, the Yankees didn’t win the pennant.

That the Yankees are trying to create the same kind of advantage for themselves that Maddon has with Zobrist, Mike Scioscia had with Figgins, or Tony LaRussa had with Phillips speaks highly to a kind of detail-oriented thinking about reserves that has been missing in many of the Brian Cashman years. Until quite recently, Cashman seemed to focus his mental energies on the starting players and the bench was something of an afterthought. A Cashman bench was John Flaherty, Enrique Wilson, and a 56-year-old Ruben Sierra, and maybe a cameo from Russ Johnson or Cody Ransom. Injuries didn’t seem to be a worry until they happened.

Now the GM, or manager, or farm director or someone is thinking about how to keep the lineup strong when an injury occurs before they happen. They seem to be saying, "What if instead of dealing off the flawed products of our farm system, we try to turn them into useful tools?" This will not only mean more wins in the long term, but less of a need to spend real prospects on Enrique-type reserves.