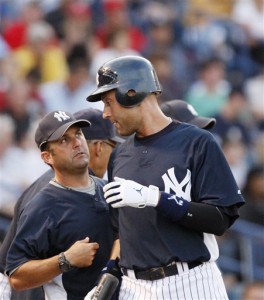 If nothing else, Derek Jeter's work with hitting coach Kevin Long should help reduce the number of worms the shortstop kills. (AP)

As one should be when it comes to 37-year-old shortstops, the Pinstriped Bible Study Group has been rather pessimistic when it comes to the prospect of a rebound for Derek Jeter. The annals aren't exactly overflowing with the success stories of such players at that age, and PECOTA is typically tepid, forecasting a .281/.350/.389 line and a .266 True Average, up from last year's .270/.340/.370 and .261.

Nonetheless, there's room for optimism when it comes to the Yankees' captain, and it comes in the form of his work with hitting coach Kevin Long. Already credited with significantly helping Nick Swisher and Curtis Granderson fix their swings, Long worked with Jeter to make some on-the-fly fixes last September, leading to a modest but hardly definitive late-season season resurgence (.342/.436/.392 from September 12 onward).

Long's tutelage of Jeter this winter has been more extensive; most notably, he's eliminating Jeter's signature toe tap in an effort to create a shorter path to the baseball. Today, WFAN's Sweeny Murti has a short, must-see video of Long explaining the changes in Jeter's footwork and its impact on his swing. Though Long is left-handed, it's not hard at all to mentally reverse the image and appreciate how this revised approach should allow Jeter to get to inside pitches more often, and to elevate them instead of generating more grounders. Jeter's 66.1 percent groundball rate last year was the majors' highest, eight percentage points higher than in 2009, and it's not a coincidence that he hit career lows in batting average, on-base percentage, and slugging percentage because of that.

"In a nutshell what we're really trying to do is keep Jete as square as possible, and as direct as possible to the ball," says Long in the video. "He gets pitched in a lot, and what I think it's going to do is it's going to open up a lane for him to get to those pitches more efficiently... The way you get the ball in the air is by freeing up a path for your hands."

Watch and learn. And hope.