Weighing in on A-Rod

Share All sharing options for: Weighing in on A-Rod 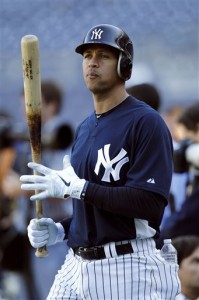 With contracts done and even the most meaningless spring training games yet to begin, most of the numbers we're hearing bandied about in Yankeeland concern player weights. Ace CC Sabathia has lost 25 pounds now that he's stopped wolfing down entire boxes of Cap'n Crunch. Fifth starter hopeful Bartolo Colon, whom you'd hope would come to camp a lean, mean fightin' machine, is a plump 267 pounds, and not terribly optimistic about shedding another 25 anytime soon. Russell Martin is down 15 pounds thanks to a mixed martial arts regimen. Joba Chamberlain is "heavier, we'll just leave it at that" after losing a 15-round fight with a refrigerator. Opening day can't come soon enough.

As these things go, one of the more interesting weight reports coming out of Tampa belongs to Alex Rodriguez, who checked in 10 pounds lighter, having cut his body fat from 12 percent to nine percent, and with his hip surgeon having told him that he's back to 100 percent. Fortunately, A-Rod seems to have stopped short of adding himself to the Best Shape of His Life watchlist, but he did indicate that over the winter, he was able to focus more on training and less on rehabilitating his surgically repaired right hip. This is exactly what you want to hear from a 35-year-old slugger who's being paid $31 million, and perhaps we can hope that it actually means something coming from a 35-year-old slugger whose inability to traffic in such banalities has often been the bane of his existence.

Rodriguez is coming off a down year, one in which he definitely started to look his age. His .270/.341/.506 line represented the lowest full-season marks of his career save for a .496 slugging percentage in 1997, and it was all he could do to match his abbreviated 2009 season total of 30 homers despite getting 60 more plate appearances. His lack of durability is starting to show; since his monster 54-homer season in 2007 and his subsequent contractual upgrade, Rodriguez has averaged just 133 games, 575 plate appearances and 32 homers a year, with rate stats (.286/.378/.537) well below his previous career marks to that point (.306/.389/.578). He served stints on the disabled list in both 2008 and 2009, and would have last year save for September roster expansion rendering that necessity moot. Instead, he did sit for 15 days due to a calf strain starting in late August.

Surprisingly, one of the most optimistic notes regarding Rodriguez's upcoming season comes from Baseball Prospectus' PECOTA projection system. Even applying a heavy dose of age-related regression, the system's weighted mean forecast calls for a .273/.370/.517 line with 34 homers in 623 plate appearances. That may not sound like much, but those are substantially better than his 2010 numbers, and in an inherently conservative system, they stand out. The homer projection is the fifth-highest, and the 4.6 WARP his offense and defense crunch out to ranks seventh among all hitters; as I said on TV, A-Rod projects to be one of the 10 most valuable hitters in the game.

To do that, though, Rodriguez will have to shore up his performance against left-handed pitching, against which he put up uncharacteristically awful numbers in 2010:

Whether it was his hip, his calf, his head or simply bad luck that led to that dip, those are ugly numbers even for late-model A-Rod. It's not as though he was simply suffering contact woes against southpaws; his 14.5 percent strikeout rate in such situations was lower than his late-model rate (18.8 percent) as well as his 1994-2007 mark (16.9 percent), his isolated power dipped only slightly, and his performance against righties has followed similar contours on both fronts. The major difference in the splits is due to a huge drop in batting average on balls in play, which could owe to luck, random variance, bad mechanics, bad eyesight, a decline in bat speed or foot speed, planetary alignment and bad horoscopes... almost anything, really. It's 172 plate appearances, which is just 1.6 percent of his career total, so it's tough to draw solid conclusions.

Nonetheless, we can hunt for clues. A peek at Rodriguez's batted ball splits shows that his HR/FB rate against lefties fell from 22.9 percent in 2009 — his highest since 2005 — to 10.3 percent in 2010, compared to a less severe dip from 22.7 percent to 20.5 percent from the right side; since 2002, those marks are 19.3 percent from the left and 24.5 percent from the right. That adds up to extra fly balls settling into gloves instead of leaving the yard, where they wouldn't have counted against his BABIP in the past.

Additionally, A-Rod's line drive rate against lefties — a figure that should be taken with a shakerful of salt — plummeted from 26.4 percent in 2009 to 12.1 percent last year, with both of those numbers represent the extremes for the 2002-2010 period and 18.7 percent his average; against righties, he fell from 17.8 percent to 14.5 percent, compared to 17.2 percent for the longer period. His rate of groundballs against lefties rose from 35.2 percent to 41.1 percent, half a percentage point off his nine-year high and 3.5 percentage points above his average for the period, but it was actually at an all-time high (47.9 percent) against righties. Meanwhile, his rate of infield hits per groundball actually increased from 2009 to 2010 against pitchers of both hands, from 3.1 percent to 7.8 percent against lefties (with a 6.1 percent average for 2002-2010) and from 5.2 percent to 6.0 percent against righties (with a 7.8 percent average), so it's not as though he legged out drastically fewer hits.

The combination of fewer balls leaving the yard, fewer line drives and more groundballs looks like garden variety age-related decline, with a bit of random variance and luck exacerbating the contrast between Rodriguez's last two seasons. That's not a tremendously satisfying or settling answer when it comes to the $275 million dollar man, but compared to the questions which surround Derek Jeter, A.J. Burnett, Jorge Posada, Chamberlain and others, this is small potatoes. A-Rod's health and his projection are both comparatively robust, and as with Sabathia and Burnett, it's worth maintaining optimism regarding his coming season rather than fretting about what could go wrong.