Who's Next: The Kids Are Alright

Share All sharing options for: Who's Next: The Kids Are Alright 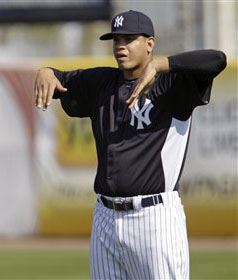 Dellin Betances is hands-down one of the best of the many Yankee prospects in major league camp this spring. (AP)

I made passing reference to Kevin Goldstein's list of the top Yankee prospects over the weekend, but having talked to Goldstein about his list on Sunday, I wanted to dig a bit deeper into it today. Goldstein's list is very encouraging for Yankee fans for a variety of reasons. To begin with, Goldstein assigns a star rating to the prospects he lists, with five stars being the top rating indicative of prospects with the best combination of potential and likelihood of fulfilling that potential. Of the 30 teams, only one has more five-star prospects than the Yankees. Here's the leader list:

The Brewers not only have no five-star prospects, but they have no four-star prospects either. Meanwhile, it's doubly encouraging for the Yankees to have such a significant edge on the Red Sox in terms of the top talent in their respective farm systems.

The Yankees also have no four-star prospects, but every other player on Goldstein's list of the organization's top 11 prospects ranks as a three-star player. That puts the Yankees in somewhat less impressive, but still limited company as one of just ten teams not to have a player ranked below three-stars in their top 11 (the others: Angels, A's, Blue Jays, Cubs, Indians, Royals, Rangers, Rays, Red Sox).

Goldstein's big-picture comments on the Yankee system are similarly encouraging:

"With a quartet of five-star prospects and a wealth of pitching overall, no system in baseball took a bigger step forward last year. . . . The Yankees system ha[s] plenty of talent that can help soon, plenty of talent to dream on at the lower levels, and plenty of pitching that will serve them well in the trade market. This is easily one of the better farm systems in the game."

What's more, when listing the organization's top talent under the age of 26, Phil Hughes is ranked second ahead of all of the five-star prospects save for Jesus Montero, who unsurprisingly tops Goldstein's prospect list as well as the lists of the Yankees' top-10 prospects lists from Baseball America, and John Sickels. The next three men on the Baseball American and Sickels lists are, in order, catcher Gary Sanchez, righty Dellin Betances, and lefty Manny Banuelos. Goldstein lists the same three men, but moves Banuelos above Sanchez and Betances. That's an indication of how confident Goldstein is in Banuelos fulfilling his potential. In our conversation, Goldstein said that Betances has a higher ceiling than Banuelos, but is also a bigger risk, and the latter is why Betances is the lowest-ranked of the Yankees four five-star prospects on Goldstein's list.

The concerns about Betances include previous arm injuries, specifically his August 2009 Tommy John surgery, the potential for his mechanics to get sloppy given his 6-foot-8 frame, the inconsistency of his changeup (admittedly his third-best pitch), potential conditioning issues, and the simple fact that he still has to prove he can be consistent over a full season as he's only surpassed 90 innings pitched once in his five minor league seasons and threw just 121 2/3 frames in the exception. That Betances still rated five-stars despite all of those concerns tells you just how good he is at his best. Goldstein's enthusiasm in our conversation would need to be edited for language to reprint here, and Betances is definitely the Yankee prospect that excites me most, if only because Montero's defensive issues continue to cloud his future despite the fact that his future is almost here.

Going beyond the five-star kids, Goldstein is more enthusiastic about Eduardo Nuñez and Austin Romine than myself or many others. His logic there is that, when you look at the 30 starting shortstops and catchers in the major leagues, Nuñez and Romine profile as legitimate major league starters at their positions, which is significant. Still, Nuñez is likely to hit an empty .280 (no power or walks), and there are concerns about Romine on both sides of the ball.

Goldstein actually lists Romine's glove as his worst tool, which should put an end to any discussion of Romine as the "defensive alternative" to Montero. Still, while Goldstein remains convinced that Montero can't catch at the major league level (in stark contrast to FanHouse's Frank Piliere, who won't praise Montero's catching but believes he's competent enough to stay at the position), he doesn't have those concerns about Romine, though he does say he is "a messy receiver" who "struggles against the running game." Worth noting: both Montero and Romine threw out 23 percent of opposing basestealers last year, but Montero had nine more passed balls (15 to Romine's six). Baseball America, meanwhile, lists Romine as the best defensive catcher in the Yankees' system, though that might say more about the receiving skills of Montero, Sanchez, J.R. Murphy, and company than it does about Romine's.

The concerns about Romine's bat might be mine, and might be partially due to the effects of hitting in Trenton, where fly balls go to die, but when I look at his career stats, I see a hitter who doesn't walk, and hits for middling averages and power. Maybe he makes "consistent hard contact," as Goldstein says, and maybe middling is above average for a catcher (the average major league catcher in 2010: .249/.319/.381; Romine's last two seasons: .272/.323/.421), but I have a hard time getting excited about this guy when he has Montero ahead of him and Sanchez, who sounds like mixes Montero's bat with Romine's defense, behind him.

Just as Goldstein is higher on Nuñez and Romine than most (Sickels ranks Nuñez 13th and says he "looks more like a utility guy to me"), he's lower on Andrew Brackman, who is fifth on the Baseball American list and ahead of Romine on both the BA and Sickels lists, but behind Nuñez and Romine on Goldstein's list. The reason here is a similar combination of concerns to those listed for Betances above (past arm injury/Tommy John surgery, the effect of his 6-foot-10 frame on his mechanics, an abbreviated track record) with a particular emphasis on inconsistency. Here's Goldstein's note on Brackman's downside:

Brackman remains highly inconsistent, with one scout saying, “I wanted to submit two reports on him; the good Brackman and the bad one.” He had starts where his heat sat at 90-92, and others where he rarely went below 94, and still had some occasional struggles with finding the strike zone. His changeup remains a below-average pitch, as he telegraphs it with notably different arm action.

The end result could be another A.J. Burnett, a fastball/curveball pitcher with ace stuff who plays as a mid-rotation starter due to inconsistency. When I mentioned that comparison to Goldstein, he didn't shoot it down. Of course, an A.J. Burnett in his twenties and under team control at the league minimum is a very different animal from an A.J. Burnett in his mid-thirties earning $16.5 million a year. Just because Brackman might not project as a potential ace like Betances or Banuelos, doesn't mean he can't prove to be a valuable member of a major league rotation.

After Brackman, things start to clump up. Goldstein's and Sickels' lists include Ivan Nova. Baseball America's does not. Baseball America and Sickels list center fielder Slade Heathcott, the Yankees' top pick in the 2009 draft, Goldstein does not (he lists Heathcott 14th on his extended list). All three have unique picks at number ten. BA goes with slugging corner infielder Brandon Laird (he's 13th on Goldstein's extended list). Sickels goes with righty Adam Warren (he's 11th on Goldstein's list). Goldstein lists righty Brett Marshall, who is just one of two players in his top 11 not to be in major league camp with the Yankees this spring, the other being second-year pro Sanchez, who just turned 18 in December.

A sixth-round pick out of high school in 2008, Marshall (whom Sickles ranked 19th) failed to impress in the Sally League in his full-season debut in 2009 before going under the knife for Tommy John surgery that July. Upon returning to action last year, he showed the form that prompted the Yankees to select him initially. Per Goldstein, Marshall is a fastball pitcher with a low-90s sinker and a four-seamer he can dial up to 96 miles per hour for a swinging strikeout and compliments those pitches with a solid slider and a developing changeup. Marshall impressed as a 20-year-old in the Sally League late last year and finished the season with a solid, but short start in High-A, which is where he should start this year. The Yankees hope that Marshall can take another step forward another year removed from surgery, but even if he doesn't, he could be a solid mid-rotation starter and should be in camp next year.

They say you can never have too much pitching, but it's clear that the Yankees have a bumper crop of young arms in their system and have for several years now despite the fact that the names keep changing (godspeed, Jeff Marquez, Zach McAllister, Alan Horne, Mark Melancon, Arodys Vizcaino etc.) or graduating (Hughes, Joba Chamberlain, Ian Kennedy, Alfredo Aceves, Phil Coke). Sickles says he counts, "eight guys with the ability to hold rotation spots at the major league level, including a couple of potential anchors, and there are more arms behind them." That should keep the Yanks from having the sort of rotation problems the are facing this spring, but I've said that before (thus the "too much pitching" maxim). Perhaps more significantly, if they do decide to trade for rotation help this season, they have a deep enough pool of talent to get a deal done without including one of those five-star prospects. I just hope Brian Cashman remembers that in June or July when his own desperation and the pressure from above and below are at their peak.