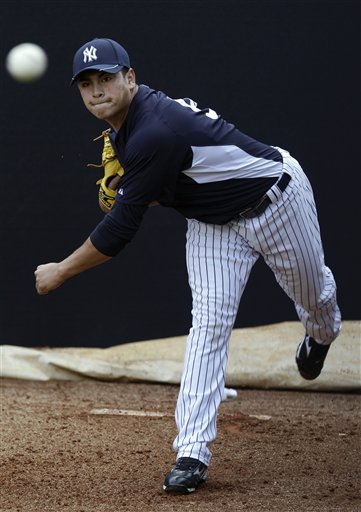 Manny Banuelos (above) and Dellin Betances will not be considered for the major league rotation this spring. (AP)

I didn't really expect any substantial non-injury new this early in camp, but on Thursday Brian Cashman stated flatly that the team's top two pitching prospects, hulking righty Dellin Betances and little lefty Manny Banuelos, are not in the mix for the two open spots in the major league rotation and will open the season back at Double-A, where they combined to make just six starts in 2010. Cashman was unequivocal in his comments to the Daily News' Mark Feinsand:

"Betances and Banuelos aren't earning spots in the rotation out of spring training. They’re going to get their first taste of big-league camp, then they’re going to get slotted into Trenton. They have no chance to make this team."

I'm not surprised. The Yankees have become notoriously careful with their top pitching prospects. This isn't simply the team being careful, however. As Kevin Goldstein pointed out in his list of top Yankee prospects, which published behind Baseball Prospectus's pay wall in Friday, neither Betances, who turns 23 next month, nor Banuelos, who turns 20 on March 13, threw more than 100 innings last year (Betances due to August 2009 Tommy John surgery; Banuelos due to an early-season appendectomy), and neither has ever thrown more than the 121 2/3 frames Betances threw in 2008. It's not unreasonable to jump a pitcher with just three Double-A starts straight to the majors because he has the stuff to retire major league hitters right now, but doing it to a pitcher who isn't conditioned to make more than 15 to 20 starts in a season is.

The upshot of Cashman's comments about Betances and Banuelos is that it leaves everyone else in play, including prospects Andrew Brackman, Adam Warren, Hector Noesi, David Phelps, and D.J. Mitchell, who appear in that order (among other names) on Goldstein's list. Indeed, going back to Cashman's comments to Feinsand, he added:

"The other guys are all competing for anything. They’re more advanced, they have more experience and they’re in a better position."

Noesi, Phelps, and Mitchell have all spent time in Triple-A, and all threw at least 150 innings in 2010. Warren made ten starts at Double-A last year and threw 135 1/3 innings in what was his first full minor league season. Brackman made 14 Double-A starts and threw a total of 140 2/3 innings. Brackman and Warren are both products of major North Carolina universities and, with Brackman now all the way back from a late 2007 Tommy John Surgery, both can be considered fast-tracked college arms. All five of those pitchers are in line to exceed 160 innings this season, which is sort of the bare minimum for a fifth starter, and all have had some degree of sustained success at Double-A or above.

I left Ivan Nova out of that accounting because not only was he actually in the major league rotation at the end of last year, but he is generally considered to have one of those two rotation spots to lose coming into camp (though Cashman hasn't been as explicit about that). Nova threw 187 innings between Triple-A and the majors last year, so he should be able to take a rotation spot without the sort of innings limit placed on Phil Hughes and Joba Chamberlain the last two seasons. That no doubt plays into his favor, but it should be noted that it's not as though Nova has one spot sown up and the five kids listed above are competing with Freddy Garcia, Bartolo Colon, and Sergio Mitre for the other. All nine men are competing for two spots, but Nova and Garcia seem to be the favorites, meaning they might only have to show competence this spring while the others will have to show dominance.

Incidentally, I've left Steve Garrison out of this accounting, not only because he didn't even crack Goldstein's top-20 prospects, but because he hasn't thrown 100 innings since 2008 and has made just seven starts above A-ball split between his last two seasons. He's not officially eliminated from the competition like Betances and Banuelos, but he might just have to be perfect this spring to even get a serious look.

One final note, speaking of the nine men battling for those two rotation spots, Bartolo Colon has weighed in at 267 pounds this spring. He's listed at six-feet tall, which might gift him an inch or two. Still, the ideal weight for a man six feet tall ranges from 147 pounds to 183 pounds. For an athlete with a high muscle mass you could probably bump that up to around 200 pounds, but even then, Colon is 67 pounds over weight. He says he wants to lose 25, but who in his condition doesn't, and how likely is a guy who says he once played at a whopping 278 pounds when he was in his twenties to do that? I've seen enough of David Wells and CC Sabathia to know that being overweight doesn't mean you can't pitch, but I've also seen enough of Bartolo Colon since his 2005 rotator cuff injury to know that the only batter he's going to scare is cookie batter.