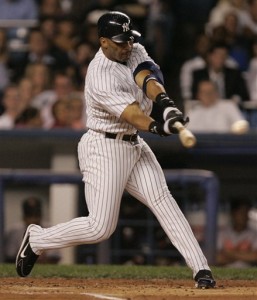 None of the drama that he surrounded himself with could eclipse the fact that Gary Sheffield was one hell of a hitter. (AP)

A month ago, I spent a fair bit of time here and at Baseball Prospectus touching upon the Hall of Fame case as well as the controversies of former Yankee right fielder Gary Sheffield. With Sheff having announced his retirement, I've got a fuller consideration of his career today at BP, with JAWS as well as further investigations into his various controversies, most notably his statement about intentional errors. Nose and tail, leaving the rest for the subcribers' entree:

Gary Sheffield officially announced his retirement on Thursday, not that it was a huge surprise. The 42-year-old slugger did not play in 2010, though he probably still had something to offer, coming off a .276/.372/.451 season in a part-time role with the Mets in 2009. In the same breath with which he made the announcement, Sheffield made his case for Cooperstown. "I am sure it will be mentioned and debated, but from my standpoint I know who is in the Hall of Fame," he said. "A lot of them don't belong in the Hall of Fame. If someone wants to debate me, check the stats."

...Over the course of his 22-year career, Sheffield certainly had his ups and downs. Forced to grow up in public, he generally gave off the impression of a man carrying a chip on his shoulder over slights, real and perceived. In the New Bill James Historical Baseball Abstract, James referred to him as, "an urban legend in his own mind," but for all of his rage and his outrageousness, it's worth noting he never found trouble with the law the way, say, Milton Bradley has. He could be a bona fide pain in the ass for his employers and the fans of the teams for which he played; I rode the rollercoaster myself as both a Dodger and a Yankee fan during his days with those two teams. Still, he was one hell of a hitter, viscerally impressive like few others. In the batter's box, with his bat twitching back and forth, he was pure menace, a tiger waiting to pounce, with a violent swing that threatened to shred hurlers in a single stroke. Watching his stint in the Bronx on a daily basis caused me to re-evaluate everything I thought I knew about the player, and to pen a three-part series which unearthed some of the information I've shared here.

At this point, no consensus exists as to how the voters will receive him. Two years ago, when Sheffield was released by the Tigers, the New York Times' Jack Curry reported, "I've interviewed numerous writers who have told me they will not vote for any players who were connected to steroids, regardless of the explanation." Jon Heyman of SI.com has not ruled out voting for Pettitte, but is numbered among those who won't vote for Sheffield. I put the question to Newsday's Ken Davidoff, who pointed me towards a fresh blog entry affirming that he would vote for him based upon "a sufficient mix of longevity and dominance," and relatively little concern about "an era that one man once accurately described as 'loosey-goosey.'" I also asked our own John Perrotto, who said he'd vote for Sheffield as well: "I'm not part of the steroids or morality police. When I look at Sheffield, I see a player who hit 500 homers, was one of the most feared hitters of his generation, and had bat speed that was second to none at the peak of his career."