Share All sharing options for: Jose Bautista: The Shining Example?

"Apparently, being the Jays GM is kind of like being the caretaker of the Overlook Hotel. You may go into it with the best of intentions, but you'll end up doing the same crazy **** as the last guy." 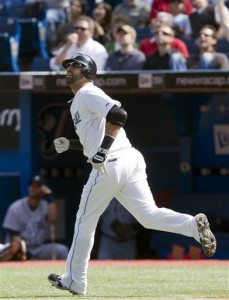 Jose Bautista's price is soaring, but history shows such deals aren't likely to pay off. (AP)

I wish I could claim that witty bit of instant analysis for myself, but it belonged to my friend Nick Stone as the two of us reacted to news of the five-year, $65 million extension to which the Blue Jays have signed Jose Bautista. I've spent a good bit of time over the last few weeks lauding the Jays, writing about them at length here and giving them the top grade on the AL offseason version of the Prospectus Hit List thanks mainly to general manager Alex Anthopoulos' feat of unloading the bloated Vernon Wells contract. This undoes that considerably.

The Jays looked as though they were going to come in with another opening day payroll in the low $60 million range, which is to say the bottom third of the 30 teams, with an implicit acknowledgment that they were building for the long term and weren't banking upon being a contender this year. The Jays went to arbitration with Bautista, with the team offering $7.6 million and the player seeking $10.5 million. This deal, on the other hand, is worth an average of $13 million per year.

Those guys as well as the other spikers had enjoyed several other productive years before spiking in the home run department. Johnson, who was 30 at the time, had been up and down in his career with the Orioles, but from 1969 through 1971 he'd hit .281/.354/.409, averaged 4.5 WARP, and earned All-Star honors in three straight years for a team that won three straight AL pennants. While horrendous from the offensive side (.221/.320/.335), his 1972 season had still been worth 3.0 WARP thanks to strong defense at the keystone. Anderson, who was 32 at the time of his spike, had been something of a late-bloomer but had hit .265/.367/.436 for the Orioles over the previous four seasons while averaging 3.7 WARP per year thanks to a 7.4 WARP season in 1992, when he was a fluky 17 runs above average in the field (he was -31 for his career). Elsewhere in the top homer spike list you have Greg Vaughn, who at 32 spiked from 18 to 50 homers from 1997 to 1998; he had bopped 197 homers in his career, including seasons of 30 and 41. Lou Gehrig spiked at age 24 but was already a strong hitter, owning a .310/.400/.547 line in two full seasons and change; he turned into one of the all-time greats. Twenty-nine-year-old Sammy Sosa spiked from 36 homers in 1997 to 66 in 1998, though for reasons that are now assumed to be nefarious; nonetheless, he was at the very least an established slugger who'd hit 207 homers in his career to that point.

Homers are one thing, total value is another. Bautista certainly delivered value last year, but even so, his WARP was suppressed by subpar defense (-11 FRAA overall, -9 in right field), though UZR and Plus/Minus put him at -7 and +5 overall, suggesting a wider spread of opinions on his glovework. The Jays paid Bautista just $2.4 million last year; roughly speaking, they were prepared to triple that going into Bautista's final year of arbitration eligibility, while Bautista was asking them to quadruple that and then some. We don't know the breakdown of the payments yet, but at an average of $13 million a year, that's 5.4 times what he made in 2010.

If ever a team needed to be protected from the dangerous impulse to overreact to one year's performance, it's here. With Bautista still under club control for one more year, the Jays should have seen what kind of value he provided in 2011 before signing him to a deal that could occupy 20 percent of their annual payroll going forward. Instead Anthopolous has fallen victim to the spell that befell predecessor J.P. Ricciardi, who doled out a seven-year, $126 million to the 27-year-old Wells, who'd averaged 4.2 WARP over the previous four years prior to signing his pact. Ricciardi fell into the pattern again by overpaying Alex Rios on the basis of two good years (5.0 WARP apiece) going into his age-27 season.

The scary thing is that Bautista is older, with less established value, and coming off an even more out-of-context season than either of those two players, and yet the Jays are banking upon him to maintain a high level of production. Taking into account a late-2009 power spike, Bautista pretty clearly established that he had raised his game significantly, but even so, he's virtually certain to regress in 2011, and over the 2011-2015 range. PECOTA's calling for a .248/.347/.491 line with 2.0 WARP; that's still a .290 TAv, and at a marginal rate of $5 million per win, it's worth about $10 million, which is likely around where his salary will be in year one.

But beyond that? It's generally a good rule of thumb that you don't give out a long-term deal for more years than the number of good ones a guy's already had, particularly on the wrong side of 30. If Bautista were merely to match the value of his second-best season (2.2 WARP) over the five years of the deal, it would be a losing hand, though admittedly not as awful as it might seem at first glance. Using Matt Swartz's Marginal Value Over Replacement (MORP) methodology and assuming that the contract calls for a flat $13 million a year and a five-percent rate of salary inflation, the WARPs that Bautista would need to justify the deal are as follows:

That requires a pretty graceful decline if the salaries are equal across the five years, but the more backloaded the deal becomes — a likelihood if the Jays are paying him somewhere around the midpoint of the two sides' 2011 figures — the higher level Bautista needs to maintain later; if his final year is $16 million, he'd need to be worth 2.6 WARP, and so forth. That doesn't sound like much of a difference, but remember, this is a guy who two years ago was nothing more than replacement level fodder. Four years from now... we just don't know, but the strong precedent for ALL players at that age is regression. Maybe Bautista gets two or three good years before he fades, but that's going to be an eight-figure albatross of a deal at some point, and there's no guarantee the Jays will be bailed out by the Angels as they were by the White Sox in the Rios case and the Angels in the Wells case.

The counterargument is that if Bautista backs up his 2010 with another strong season, he's going to be worth more than $65 million and could price himself out of the Blue Jays' range. That's negotiating out of fear — oh, noes, we might lose him! — and it takes the assumption that he's actually worth $65 million from 30 to 34 as a given, which is not a bet I want to make based on such a short track record. (update: added them) Take a look at the outfielders who have signed contracts of at least $40 million since the winter of 2006-2007:

The table shows the year the deal became effective, the player's age that year, the terms of the deal in millions of dollars, the WARP he'd complied to that point, the WARP he's compiled over the course of the deal thus far, and the average WARP per year.

Of the 14 outfielders who've gotten deals of at least $40 million since 2006, all but one of them had compiled more WARP to that point in their careers than Bautista. Yet over the courses of their deals thus far, only four have been worth more than they've been paid according to MORP. Three ranked among the most established of the bunch, the other, interestingly, was Rios, who signed at the youngest age:

Those two charts summarize why I'm so wary of making such a steep bet on Bautista: guys with shorter track records are less likely to pay off, and that's without even considering where the Blue Jays are in the success cycle. Adding one $10 million slugger in 2011 isn't going to put them into contention, and locking in one aging slugger who could still occupy 20 percent of payroll four or five years down the road is straight from the Big Book of Bad Ideas.

If you want to lavish a guy with riches following a career year, better to do something like reward Bautista with a two-year, $25 million deal which buys out his final year of arbitration and first year of free agency on the assumption that you're harvesting the value of the second- and third-best seasons of his career at a market rate, then re-evaluate. Don't make the same mistake the guy before you made. You may not get blood pouring out of the Rogers Centre elevator, but you're likely to hamstring your team nonetheless.