A Clash of Priorities

Share All sharing options for: A Clash of Priorities 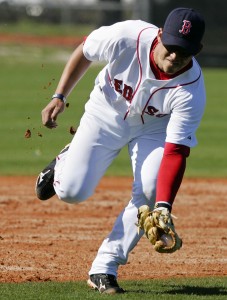 Julio Iglesias: The Wizard of the Fens? (AP)

I’m not sure if this has anything to do with the Yankees or not, but I was just reading through the Red Sox chapter in the new Baseball America prospect book. The BA guys rank shortstop Jose Iglesias as Boston’s top prospect. Now, Boston’s system is a bit on the dry side right now, so just because Iglesias is listed there doesn’t mean he’s automatically a future great. In fact, he’s going to be hard-pressed to hit. The 20-year-old Cuban import has hit .295/.339/.379 in 70 minor league games that have carried him up to Double-A. He has yet to hit a home run and he’s impatient. That he’s young and playing at a high level cuts him a lot of slack, but right now he doesn’t look like another Nomar.

It’s Iglesias’s glove that is the real cause of fascination. BA calls him "an exceptional fielder who could challenge for a Gold Glove in the majors right now. He plays low to the ground, using his quick feet, lightning-fast hands, and strong arm to make all the plays. His instincts and body control also stand out, and he made just seven errors in 57 games at short."

Baseball Prospectus’s Kevin Goldstein also named Iglesias the organization’s top prospect, reporting, "One scout even said, ‘Often the highlight of an entire day in Portland was just watching him in fielding drills.’ With uncanny instincts, a great first step, range to both sides, liquid-smooth actions and a strong, accurate arm, Iglesias is the rare 80 defender with true Gold Glove potential."

Right now, Boston’s shortstop is Marco Scutaro, now 35. Scutaro is a good player, but is clearly a placeholder. Scutaro and the Red Sox have a mutual option for 2012, which they can exercise or not given Iglesias’s progress. Whether they do or not, there is a good chance that if Iglesias plays well at Triple-A this year that he will get a good chance to take the shortstop’s job in spring training.

I suppose this is the relevance to the Yankees: next year, the Red Sox will likely hand their key defensive position over to a 22-year-old defensive wizard. The Yankees will be focused on perpetuating a 38-year-old shortstop who is not and never has been wizardly. The Red Sox’ pitching staff will benefit, the Yankees’ will suffer. Boston’s offense may suffer in proportion, but it’s not clear that Jeter will be a great help to the offense by 2012 either. It’s just a contrast in priorities.

Of course, it would help if the Yankees had a great young shortstop coming up behind Jeter, but they don’t. Eduardo Nunez would be a solid regular given the current state of the position, but far from a star. At some point, though, your stars are relative—dimly-lit orbs are brighter than those that are about to wink out.