Albertageddon is Causing Some of Us to Crack

Share All sharing options for: Albertageddon is Causing Some of Us to Crack 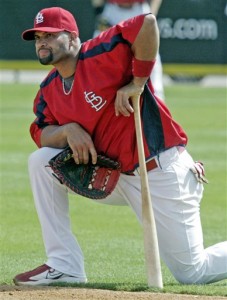 His deadline for an extension having come and gone, Albert Pujols gets to wait like the rest of us. (AP)

We're less than half a week into spring training, and the pressure must be getting to the best of them. It certainly couldn't be the heat, not in February.

Yesterday, with Albert Pujols' self-imposed deadline for a contract extension less than 24 hours away, Fox Sports' Ken Rosenthal, normally one of the industry's most reliably grounded reporters — a deal's a deal when he says it's a deal — indulged himself with a spectacularly off-the-wall column in which he suggested that the Cardinals could try trading Pujols to the Yankees for Mark Teixiera. If that didn't work, the Cards could try dealing Pujols to the Phillies for Ryan Howard.

Uh-huh. Seriously, I'd like a pint of whatever Rosenthal was nipping at.

So many obstacles to either deal exist that it's probably not worth enumerating them, but this being a spectacularly slow news day in Yankeeland, let us count the ways. Start with the fact that Teixeira, who is owed $135 million over the next six years ($22.5 million per year) has a full no-trade clause in his contract. Howard, who will earn $20 million in 2011 before a five-year, $125 million extension kicks in, has a limited no-trade clause. Pujols, who is earning a comparatively meager $16 million this year, has a limited no-trade clause, one which is mooted by the fact that he's also got 10-and-5 rights, which means that having been in the majors 10 years, the last five with the same team, he can veto any trade as if he had a full no-trade clause. Pujols has already indicated that he'll veto any deal.

As if none of that was enough to quash the notion of a possible deal, Cardinals GM John Moleziak is on record as saying the Cardinals won't consider dealing Pujols. Add to that the fact that the talent gaps between Pujols and the two potential trade targets are wide enough that the acquiring teams might have to surrender additional talent and... wait, why are we still talking about this?

In any event, Albertageddon arrived, and the most disappointing aspect of that is that true believer and nonbeliever alike, we all appear to be Left Below. While Pujols and agent Dan Lozano set an artificial deadline timed to Pujols' arrival in camp because of a belief that continuing to negotiate would constitute a distraction, it's impossible to see how the next eight and a half months of baseball will unfold without the situation overshadowing everything that Pujols and the Cardinals do. It's like being told not to think about elephants, specifically the one in the middle of the room. As silly as the Pujols camp's stance was, it was rivaled by the Cardinals' response. Their last offer, according to a presumably more sober Rosenthal, was somewhere between $19 and $21 million per year, for less than the 10 years he sought, a pact which would place Pujols in the top 10 in salary but not in the top five:

That's a pretty silly slap in the face of a player who's so obviously the game's best hitter, a three-time MVP with a lifetime line of .331/.426/.624 and an average of 41 homers per year in his career. Which isn't to say I'd meet those specific demands if I were the Cardinals' GM, but jeez, throw an offer like six years and $180 million at him, something that lets him claim the highest average value if not the largest contract.

As silly as Rosenthal's trade suggestion was for the number of obstacles that stood in its way, it wasn't the only howler involving a pending free agent. A tweet from New York Daily News Mets beat reporter Andy Martino — now best known for showing up at Port St. Lucie wearing a Speedo over his jeans to make good on a bit of Cliff Lee-related Winter Meetings speculation gone sour — referred to "Future Yankee Jose Reyes."

This is apparently a recurrent meme in Martino's world, for reasons unclear. I'm not sure if he simply likes throwing red meat at riled-up Mets fans, or if he thinks it's a gut-busting joke, but... must we run through this? There's the fact that the Yankees just signed Derek Jeter to a pricey three-year deal with an option and no real idea what to do with him beyond stick him at shortstop until the End of Days. At second base, where Reyes played 43 games in 2004 to accommodate Kaz Matsui (and what a great idea that was), the Yanks have Robinson Cano signed through through this year at $10 million, with club options for $14 million and $15 million over the next two years; short of catastrophe or apocalypse, the only way those won't be picked up is if the Yankees negotiate a longer-term deal with a hitter who's in his prime. At the infield corners, the Yanks have Alex Rodriguez and Teixeira tied up until the cows come home. Jest or no, Martino's suggestion starts to make Rosenthal's modest proposal sound like the less farfetched of the two.

By the way, extrapolating from my Sunday night TV appearance, I've got a piece on the quandary the Mets face with Reyes up at Baseball Prospectus today. Reyes is coming off back-to-back seasons in which he's been limited by injury and illness, and while the Mets' finances are up in the air thanks to the whole Madoff mess, their farm system lacks a capable successor at shortstop, and the upcoming free agent market for such looks quite grim. Which is one reason why the Yankees re-signed Jeter at the clip they did.