What's In A Number?

Share All sharing options for: What's In A Number? 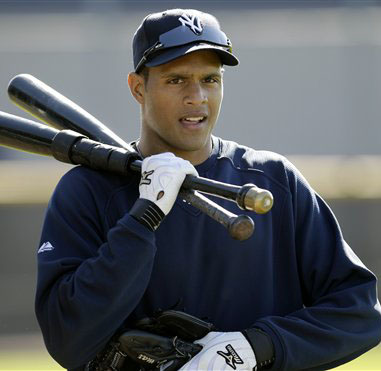 I always find it interesting to see what numbers certain players are given in Spring Training. Not because the specific number means a whole lot, but because whether or not the team gives a player a "normal" number or a "Spring Training" number can be a subtle indication of their hopes or expectations for that player to make the Opening Day roster.

For example, last year, Eduardo Nuñez wore number 12 while in the major leagues, and yesterday I wrote that he's the Yankees' best option for the utility infielder spot. However, when Nuñez arrived in camp, he was given number 67, while 12 was assigned to Eric Chavez. Ramiro Peña, however, retained his old number 19, which makes it seem like the Yankees are entering camp expecting Peña to be their futility man for the third straight season. Also worth noting, Ronnie Belliard received number 26, making him the only other infield bench candidate to be assigned a number below 60.

Similarly, among the outfielders, Justin Maxwell, who I had pegged as the favorite to take a potential fifth-outfielder's job, received number 63, while Greg Golson retained his number 27. No other outfield bench candidate has a number below 61. The fact that the Yankees have three infield candidates with numbers below 30 and just one outfield candidate with a number below 60 seems to back up the opinion that the Yankees would rather bring an extra infielder north than an extra outfielder.

As for the catchers, Rafael Soriano took Francisco Cervelli's 29 when he signed with the team, but Cervelli has rebounded with number 17. The next lowest number worn by a catcher in camp is Gustavo Molina's 53. Russell Martin will stick with the number 55, which he wore with the Dodgers. That number was not assigned last year, making Marting the first player not named Ramiro Mendoza or Hideki Matsui to wear 55 since Wally Whitehurst and Jorge Posada each donned it in 1996. Similarly, non-roster lefty Neal Cotts has received number 35, which has not been worn by a Yankee since Mike Mussina's retirement.

There is a surprising quantity of low numbers among the non-roster pitchers. Mark Prior has his old 22. Freddy Garcia has 36. Bartolo Colon wears his usual 40. Buddy Carlyle has 38. Brian Anderson has 39. Andy Sisco has 41. Luis Ayala has 43. That last is notable because 43 is Damaso Marte's number, but Marte is out for what could be the entire season following labrum surgery in his pitching shoulder. That Ayala has Marte's number tells you a bit more about the Yankees' attitude toward Marte's eventual return. Among the homegrown pitchers, Ivan Nova retains his 47, but no other pitcher from the farm system not guaranteed a roster spot has a number lower than Romulo Sanchez's 64.

Finally, for those curious what Andrew Jones would do given that Mark Teixeira already had the number 25 Jones has worn throughout his career, he's taken number 18. All of the other established players have retained their old numbers, while the highest number in camp will be worn by Double-A center fielder Austin Crum, who dons 96. The numbers below 96 that are neither retired nor assigned are 6, 21, 46, 51, 69, and 91, the last of those an indication of the Yankees' apparent desire to bring Alfredo Aceves back on a minor league deal before the Red Sox offered him a major league one.

Programing note: Part 2 of my look at the Yankee campers, profiling the pitchers in camp, has been rescheduled for tomorrow morning.