The Pitfalls of Commitment

Share All sharing options for: The Pitfalls of Commitment

"We signed (Derek Jeter) to be our shortstop, and we signed him to be our leadoff hitter," Girardi said. "And he’s got a pretty good track history of what he’s done in the game of baseball. He had a couple of rough months last year. The month of September he was back to being Derek, I thought. I’m not really too concerned about him as our leadoff hitter. 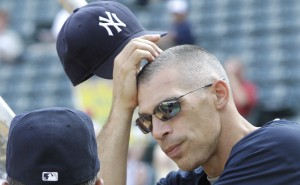 Joe Girardi: He might have spoken too soon. (AP)

Now, normally I might jump up in the air, spin around three times, and spatter the environs with chunks of stewed tomatoes, because the Yankees may have re-signed Jeter for the rest of his career, but that doesn’t mean they have to chain themselves to him like Ahab to the whale and ride him down into the murky depths. However, I am not going to do that, nor am I going to say, as I always say, that the leadoff spot is a way of distributing playing time in the form of plate appearances, and Jeter is no longer the Yankees who deserves to have more than any other hitter. I won’t even say, as was suggested to me by my BP colleague Christina Kahrl, that a batting order with Russell Martin blocking Brett Gardner on the bases in front of Jeter could result in the Captain finally hitting into 30 double plays.

Okay, I just said these things in the process of not saying them. You caught me, but they are not really the point. This is: when a manager has a Grand Old Player who comes equipped with pride of place, it is better to keep one’s options open from the outset, because you really don’t know what the future will bring in terms of performance. Sure, Girardi hopes Jeter will hit as well as he did in the last 15 or so games of 2010, but he doesn’t know that he will, and the odds are pretty good that Jeter won’t.

If Jeter needs to be pulled from the leadoff spot, then there is a good chance that, by taking such a firm stand now, Girardi will have to do a lot of talking later about (a) if he was wrong, and (b) if Jeter’s powers are failing. As the old song goes, he’s building himself up for an awful letdown. Girardi’s managerial forefathers have dealt with similar issues like dropping Joe DiMaggio out of the fourth spot in the batting order or prying Cal Ripken away from shortstop and out of the lineup in general. The difference here is that Jeter has never been associated with the leadoff spot the way those players were with their places—not until now, when Girardi came down with both feet in favor of the concept.

If he had been less definitive—"We’re not going to have a set batting order, necessarily. I’ll have to look at the matchups and make a decision. No doubt you will see Jeter there a lot, but Gardy too"—then when the time came to make a change, it would have happened almost without anyone noticing. Instead, he’s now depending on Jeter to bail him out. Five years ago it would have been a good gamble. In 2011, it’s a risky proposition. It's never good for a manager to paint himself into a corner.