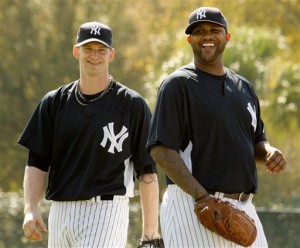 The Yankees have reason to be optimistic about both CC Sabathia and A.J. Burnett. (AP)

It should probably surprise no one that CC Sabathia has changed his tune about the possibility of opting out of his seven-year, $161 million deal at the end of this season, as is his contractual right. Back in August, he told the New York Post that he "won’t even consider" exercising his option to re-enter the free agent market, citing his year-round residence in the area, his kids' schooling, and the house he'd built in Bergen Count. In mid-December, when the Yankees still had hopes of landing Cliff Lee, he reiterated that stance by noting that neither Lee's presence nor the size of his deal would influence that.

Having arrived in camp yesterday — happy Pitchers and Catchers to you all, by the way! Did you get the card I sent? — Sabathia was more equivocal. After a dreaded "source with knowledge of the situation" (read: agent) said that the 30-year-old southpaw was likely to exercise that clause, Sabathia refused to refute that: "I have no idea. Anything's possible."

What changed? Either Sabathia's agent or somebody from the Major League Baseball Players Association paid him a visit at some point this winter and read a few choice psalms from the Book of Superstar Contract Cliches, or Sabathia was smart enough to figure things out for himself. By leaving his options open, he recovers some negotiating leverage, both for himself and his peers. If he's happy enough to think about staying — and all indicators certainly point that way — why shouldn't he attempt to parlay that into an extension? And with the market for free agent starting pitchers expected to be thin again next winter, with Chris Carpenter and C.J. Wilson the top candidates if the Phillies pick up Roy Oswalt's option, why shouldn't he attempt to raise the bar? Sabathia's $23 million per year deal helped Lee get to $24 million per year, and somebody's got to tear the roof off the sucker to get to $25 million, particularly in light of record revenues for the sport.

It's not as though this is a surprise to the Yankees, either; they put the clause in that contract knowing that the precedents of J.D Drew, Alex Rodriguez and A.J. Burnett strongly suggested it would be exercised. As Brian Cashman says:

"It's a right he has; it's something that's certainly a possibility... It's something he earned during the discussions, something I threw in without a doubt to make him feel comfortable about coming here. That's something for later on - one way or the other.

"He loves it here; but liking it here and having contractual choices are two different things... Hopefully he has a great year, then he'll have some things to think about."

Even with so much pitching in their organizational pipeline, the Yankees can ill afford to let Sabathia walk after this season; they've got a hard enough time coming up with five starters at the moment, and they need the 230-odd high quality innings he can provide, particularly with Sabathia having demonstrated that he can thrive in pinstripes. Over the past two seasons, only Roy Halladay and Felix Hernandez have tossed more innings than his 467.2, and among the hurlers with at least 400 innings tossed, only nine others have higher ERA+ marks than his 131, with Lee tied at that mark. The Yankees can be hopeful that having recovered from minor knee surgery and shed 25 pounds by dialing back on those full boxes of Cap'n Crunch, Sabathia's in for another big year. And if he is, they'll pony up what it takes to keep him.

Elsewhere in camp, a chastened Burnett lamented his lost 2010 season: "I am not saying that we didn’t win the World Series because of me, but I know if I had been right, it would have been a lot easier chore. I never knew how important I was to a team. That’s not being cocky or arrogant, it’s the way it is. I mean, what did I do to help?"

It already sounds as though working with new pitching coach Larry Rothschild is paying dividends as far as mechanical tweaks go. Burnett says that the two have been working on his landing leg, whose swinging caused his pitches to flatten out.

As I noted in my TV spot on Sunday night, PECOTA is only so optimistic about Burnett. Here's his first-run weighted mean forecast — the most likely outcome along a wider range of possibilities – along with that of Sabathia:

Thanks to his ability to eat innings at such a high level, PECOTA sees Sabathia as the third most valuable pitcher in the game behind the aforementioned Halladay and Hernandez, both at 6.8 WARP. As for Burnett, the system sees him shaving seven-tenths of a run off his 2010 ERA thanks to a rebound in the strikeout department (he whiffed just 7.0 per nine) but essentially unchanged rates for both walks and homers. That beefy walk rate is right at his career mark; it's always been what's prevented Burnett from climbing to the next level, leaving him as a pitcher with an ERA around 4.00 instead of one in the lower threes.

An ERA in the mid-4.00s might not sound like much, but given the offensive dynamo that supports Burnett and the other Yankee hurlers, it'll play. Given the spread of possibilities, there's a good chance he improves upon that. In fact, PECOTA gives Burnett a 55 percent chance of improving upon the three-year baseline performance upon which it bases its projections, the 11th-highest rate among the 1,000+ pitchers projected thus far. That baseline includes a 4.42 ERA but peripherals which suggest a mark about a third of a run lower depending upon which ERA estimator you worship.

Interestingly, it wasn't Burnett's breaking balls which were the cause of those homers, at least not directly. According to Joe Lefkowitz's PitchF/X Tool, 18 of Burnett's 25 homers allowed came on four-seam fastballs last year, another four on sinkers, with just three coming on what PitchF/X classifies as his knuckle-curve. Not surprisingly, most of them came when he was behind in the count, six on 1-0 pitches, three on 2-0, three on 2-1, another one on 3-1, two on 3-2. Just three came when he was ahead in the count, another seven when he was even (0-0, 1-1, or 2-2). As with most pitchers, so much comes down to command of the fastball, and the ability to get strike one. The mechanical tweaks Burnett is working on should help him do that.

In any event, hope springs eternal, particularly with camps just opening. The Yankees have plenty to fret about in their rotation both in 2011 and beyond, and we'll have plenty of time to stare into the abyss when things go wrong. For the moment, it's worth thinking happy thoughts about Sabathia and Burnett, as their track records suggest another strong season from the former and a rebound from the latter.