Who Needs Posada When You Can Have Pujols?

Share All sharing options for: Who Needs Posada When You Can Have Pujols? 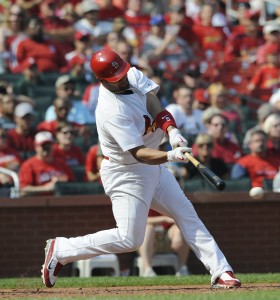 Take this for what it is, a bit of speculation on a slow news day: I have no greater pretensions here that gnawing over a current controversy from a Yankees point of view. Last week, I spent some time considering the possibility that the Cardinals might trade Albert Pujols because of an impasse in contract negotiations. I don’t think they will—the incentives to do so are all wrong. Yet, if they do, should the Yankees be in on it? What about Pujols’ nigh-inevitable spin on the free agent merry-go-round after this season?

Let’s take the second part first: I would say no. Pujols is one of the greatest players in history, and sure, the Yankees can likely afford him—the Steinbrenners didn’t do anything with Bernie Madoff that we know of, unlike a certain other team’s owners—but Pujols is reportedly seeking something in excess of five years, something that resembles Alex Rodriguez’s current 10-year deal. The risk there should be self-evident. Pujols will be 31 at the conclusion of the upcoming season,, and he’s already making $16 million a year, so a 10-year contract would take him into his 40s at the cost of, perhaps, $20 million a year. No matter how good he is now, or how good he may be for a few years more, the acquiring team is going to be spending top dollar for a decaying asset. The Yankees have made that kind of outlandish commitment once already, and one suspects that they won’t be eager to do so again. It’s not that Rodriguez has burned them, but that, inevitably, he will.

They might be tempted in spite of themselves given that should Pujols reach free agency, the Red Sox are likely to at least kick his tires. Neither Adrian Gonzalez nor David Ortiz are signed, so there is a future opening waiting to be filled. Pujols at Fenway, shooting balls not over but through the Green Monster, might get the pinstriped wallet opened a bit wider, just as a short-term defensive gesture.

As far as trading for the big man, the Yankees probably have the resources but not the roster space to accommodate him. Sure, they could say, "Thanks so much, Jorge, it’s been swell. Take a seat on the bench or on the Seattle Mariners of your choosing while we make use of this here DH spot," but that assumes that incumbent first baseman Mark Teixeira, Yankees property through 2016 and a Gold Glover just like Pujols (for what Gold Gloves are worth), would be interested in being the DH, or that Pujols would. Such a logjam brings to mind 1982, when the Yankees had Dave Winfield, Jerry Mumphrey, Ken Griffey, Oscar Gamble, Dave Collins, Lou Piniella, Bobby Murcer and more trying to fit into the same four outfield and DH slots. There was spillover to first base, there was spillover into the parking lot and onto the Major Deegan. No one was happy.

The presence of Teixeira and his full no-trade clause is the biggest practical impediment to the Yankees making a play for Prince Albert. It’s not certain that’s a bad thing. Both players are the same age, but Teixeira is two years further along on his eight-year contract. The Yankees will be done with him after his 36th birthday, which is late, but not as late as they will be done with Posada (39), Derek Jeter (39 or 40), or Rodriguez (42). Pujols, starting his contract two years later and, theoretically, taking two years longer, would be another Yankee contracted into his fourth decade. As special as Pujols is, the Cardinals already got the good part; the Yankees would be on the hook for the rind, and then some. If Teixeira stands in the way of that, it will likely prove to be as much of a service as any home run.