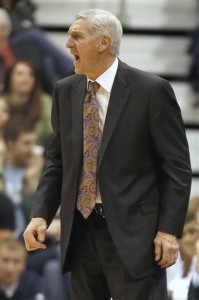 Fiery Jerry Sloan had more than a litte in common with calm Joe Torre. (AP)

Tying up a few loose ends on a late afternoon...

• I'll be a guest on the Fox Sports Extra show — that's channel 5 and 705 here in New York, at least on Time Warner Cable — on Sunday night at 10:30 PM, talking Yankees and Mets with host Duke Castiglione. This will be the third time I've been the guest on his show, and while the appearances have been brief, it's an honor to get the air time, not to mention a whole lot of fun. I hope you'll tune in.

• Having grown up in Utah in the Seventies and Eighties, I'm saddened by Thursday's abrupt resignation of Jazz coach Jerry Sloan, who'd been on the job for more than 22 years, dating back to when I was a basketball-crazy high school senior who had absolutely no game beyond the ability to foul hard and rebound about as well as a 5-foot-9, 130-pound kid could.

The Jazz had moved to Salt Lake City from New Orleans, about as polar opposite a city as you can find in this country, bringing with them a five-year-old franchise that was barely major league caliber. After going 26-56 in their final year in the Big Easy (1978-79), the Jazz won 24, 28, and 25 games in their first three years. Through astute drafting and the guidance of GM-turned-coach Frank Layden, they gradually clawed their way to respectability, winning 45 games and making the playoffs for the first time in 1983-1984, Layden's second season at the helm. They made the playoffs four more times in a row — culminating in an exhausting seven-game series against the eventual champion "Showtime" Lakers, featuring Kareem Abdul-Jabbar and Magic Johnson — before Layden abruptly resigned from coaching 17 games into the 1988-89 season (he would remain as team president). The team and its fans were devastated; future Hall of Famer Karl Malone solemnly dedicated the rest of his career to Layden, who'd served as a father figure to him. Nobody thought things would ever be the same for the unlikely bunch of small-market upstarts.

Sloan, a hard-nosed six-time All-Defensive Team selection during his own 11-year career, took over. Staying true to fundamentals which had all but gone out of style in an increasingly fast-paced game — a half-court offense featuring the pick and roll expertly executed by Malone and fellow future Hall of Famer John Stockton — the Jazz continued to win, and to push for a title. They reached the NBA Finals in 1997 and 1998, only to run into Michael Jordan's Bulls during their second dynasty, and and fell just a few criminally awful calls and non-calls which favored the Bulls — don't even get me started on that conspiracy; my calls to the Attorney General remain unreturned — short of an NBA championship. In the end, the Jazz made the playoffs a record 20 straight times under Layden and Sloan, continuing to do so after Stockton and Malone had both departed. They endured some lean years in the aftermath, but have made the playoffs in each of the last four seasons, getting as far as the Western Conference Finals in 2006, and at 31-23 are currently on track to reach the postseason again.

Though Sloan was apparently undone by an ongoing feud with the Jazz's biggest star, Deron Williams, the 68-year-old coach had been contemplating retirement for years. As I don't follow basketball at all much these days, I care relatively little for the postmortem concerning the proximal causes of his departure, and am more interested in the reasons he survived for so long. In that regard, I can't help but see a parallel to Joe Torre during his tenure with the Yankees.

Sloan was a blue-collar country boy from the inappropriately named Gobbler's Knob, Illinois, and fiery-tempered one at that. While he made his name as a player (and got his start as a coach) with the Bulls, he wound up coaching in one of the league's smallest markets. For all of his perseverance, he never won a ring (but then relatively few coaches have). Torre, by contrast, was a city kid from Brooklyn who radiated an uncanny calm that helped him serve an unimaginably long stint on baseball's biggest, brightest, and highest-pressure stage, the Bronx, where he won with a frequency not seen in decades.

Yet both Sloan and Torre were humble, streetwise men who, with the exception of the occasional transient free agent, routinely got the most out of their players, Hall of Famers and scrubs alike. Both displayed an uncanny knack for dealing with the media as well as their rosters. Both raised the expectations for success in their respective venues. Both exuded an integrity founded in accountability, a trait which clearly rubbed off on their team's leaders, the Jeters and Cones, the Stocktons and Malones. That code of accountability ran right down to the last man on the roster; only on the rarest occasions did you hear anyone on either of those teams deflecting the blame, and when they did, woe to them.

In exchange for that accountability, both men went well out of their way to avoid throwing their players under the bus when things went wrong. In part that was because they were able to keep some measure of perspective; things going wrong on their watch didn't mean a last-place finish, it meant a late-game lapse or an early postseason exit — a bummer, but one that happened in the midst of a whole lot of good stuff.

Neither man was 100 percent perfect in that regard; Torre's lapse with Alex Rodriguez in the 2006 playoffs resonates in part because it was so out-of-character, and likewise Sloan's clash with John Amaechi, a player whose underperformance sabotaged the Stockton-Malone core's last gasps for a title. But those are small nits to pick in Hall of Fame caliber careers that were defined by their integrity as much as their success. The Yanks have moved on from Torre and continued to thrive. I can only hope the Jazz do the same under new coach Tyrone Corbin, who like Joe Girardi, has the burden of filling a Hall of Famer's shoes. No matter what happens, Jerry Sloan will be certainly missed.

• Speaking of managers and coaches, it was sad news to hear of the passing of former manager Chuck Tanner, best known for piloting the Pirates to the 1979 world championship. Led by Willie Stargell and featuring a memorable cast that included Dave "the Cobra" Parker (regarded by some as the best player in the game at the time), Bert Blyleven (with whom Tanner feuded), John "the Candy Man" Candelaria, skinny, sidearming relief ace Kent Tekulve, four-time batting champion Bill "Mad Dog" Madlock, Phil "Scrap Iron" Garner, and so many more, those Pirates were the first team for which I did not have a recurrent rooting interest who pulled me onto their bandwagon nonetheless. Likely, that had more than a little to do with Sister Sledge's insidiously catchy disco hit, "We Are Family," which at once served as their anthem and their credo; they were all about inclusiveness.

Known as a player's manager, Tanner skippered the White Sox, A's, Pirates and Braves for parts of 19 seasons, compiling a 1352-1381 record, and reaching the playoffs just that once, though he did manage five second-place teams (one in Chicago, one in Oakland, and three in Pittsburgh) at a time when there was no Wild Card. As Bill James noted in his managers book, his earliest teams in Chicago overachieved, but his later teams tended to underachieve; James savaged Tanner in his later annual Abstracts — sometimes fairly, sometimes less so — but that's a story for another day. As Craig Calcaterra pointed out, Tanner presided over what turned out to be a cocaine epidemic in his own clubhouse. But for one magical season, virtually everything went his team's way, and everyone had a hell of a lot of fun.